They could be my neighbours: a day in life of a rescue boat crew 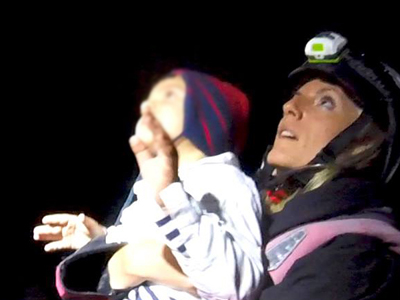 Nik is a volunteer Search and Rescue crew member for our partners Refugee Rescue. Their boat Mo Chara (Gaelic for ‘my friend’) is the only rescue boat operating on the north shore of the Greek island of Lesvos. Here he outlines one of the longest and most tiring rescues Mo Chara has taken part in.

A refugee boat has arrived near Palios and our help has been requested to evacuate people stranded at their landing spot. We gear up, head to Mo Chara, and leave within minutes of the initial message. Our helmsman has the boat going nearly flat out to the estimated landing location. It’s a clear night with good visibility and we race across the almost flat water under the moonlight.

On scene near Palios, we find a Hellenic Coast Guard vessel lighting up the shoreline with a search light to point us to the new arrivals. They are halfway up a step and rocky embankment, huddled around a makeshift fire for warmth. There’s no rubber dinghy tonight; this group was dropped off from a smuggler’s speedboat, dumped wherever and then abandoned. The spot they are in is not accessible from the road and at first glance the steep embankment they scrambled up presents some challenges for their retrieval. We drop off three crew members in drysuits to assess the arrivals’ condition and to find a way to evacuate them safely.

This group turns out to be from Afghanistan and there are 26 of them. Among them an elderly lady with very limited mobility, and an expectant mother who is in the later stages of pregnancy. She is mildly hypothermic. There don’t appear to be any serious medical cases at first glance, though we do have a scare with one of the boys later on.

Without an easy way to get the group back down the same steep embankment they had scrambled up, it quickly becomes clear that the crew on shore will need to lead the refugees back down to the water some way to the left from where they landed, where there is a more easily navigable notch in the embankment. While our crew on shore explains the plan to the refugees and starts taking them down to the water in smaller groups, I take over the helm from the Coordinator to free him up, so that he can concentrate on leading the rescue effort. With him on the bow, we do a careful shoreline approach with one engine shut off and raised, and the other trimmed up to keep the prop out of harm’s way. It takes a couple of tries, but we find a safe spot that our  thinks he has used before. With our pickup point determined, I pull the boat back again and we stand by for the first group of people to arrive down at the water as our Coordinator catches up with calls on the alarm phone and requests for more information from just about everyone.

The hard work on this rescue is all done by the crew on shore. They have to scramble up the steep embankment before they can assess the 26 people and relay information about them, making sure there are no medical cases that need immediate attention. They hand out emergency blankets to the arrivals and show them how to put them on (under your clothes rather than on top, silver side to the skin). Then they have to find a usable path back down to the water, lead everyone down, helping those who need help, all the while making sure that everyone stays safe, themselves included. Once they have the first people ready to be transferred, some of the crew helps them climb into Mo Chara or physically lifts those who cannot climb in themselves. The rest of the crew on shore works on bringing down the remaining refugees, including the elderly woman who cannot walk well. It’s hard work.

On Mo Chara, parents clutch their younger children or make sure that older ones are seated and safe before they themselves sit down. Faces are young, old, and everything in between. All are tired and look weary. Most of them are part of a family. Families sometimes exchange brief words after they are seated, but by and large the refugees are silent. People are clearly cold and exhausted, and many of them are wearing the emergency blankets we handed out. Some are so tired I watch them stumble along when they walk. Young children cry, cold and uncomfortable, soothed by their exhausted parents. Belongings are stowed next to me where people cannot sit because of the throttle controls. People carry what they can: backpacks are common, as are thick, waterproof garbage bags, and at one point I stow a woman’s leather handbag next to me. This handbag feels strange, out of place, like a remnant from another life. Like some of the people we assist, it reminds me of something: just like last year, I have this intense sensation that these people could easily be my neighbours back in Canada, except they are currently seeking refuge. They are people who have been thrown into a life-threatening situation against their will, driven by events that are entirely beyond their control. The fact that our roles are not reversed seems by sheer chance and, in a parallel world, I might be the one sitting on a rescue vessel, looking exhausted. It all feels a bit random and familiar in equal measure.

“these people could easily be my neighbours back in Canada”

Getting the refugees off the rocks is just half of the job. We need to take them to Palios Harbour, and deliver them to the waiting volunteers of the land crew. On one of our runs to the harbour, a young boy starts to drift in and out of consciousness on the boat and I am asked to pick up the pace and take the boat in as quickly as I safely can. When we reach Palios, I gently nose Mo Chara in between two other boats, helped by a policeman who pushes one of the moored boats aside for me and we pass him to a waiting nurse who carries him off in her arms. His mother, who sits at the back of the boat, has to wait to get off, as others need to disembark before she can make it to the bow and climb onto the quay. I can’t help but feel her worry. (There are many children on these refugee boats, often making up about half of the new arrivals. Two days later, I meet Andrea, the doctor who treated the boy, and ask about him. He suffered from exhaustion, but made a full recovery.)

It’s 2 a.m. by the time we get back to the house after our return to Skala and we are planning to take the boat down the coast for service at 7 a.m. Time to sleep.

Refugee Rescue operates the only rescue boat on the north shore of the Greek island of Lesvos. Their heroic volunteer team works tirelessly, 24/7, helping refugees get to safety. Find out more about Refugee Rescue and donate to support life-saving projects like this.

Your ticket for the: They could be my neighbours: a day in life of a rescue boat crew

They could be my neighbours: a day in life of a rescue boat crew