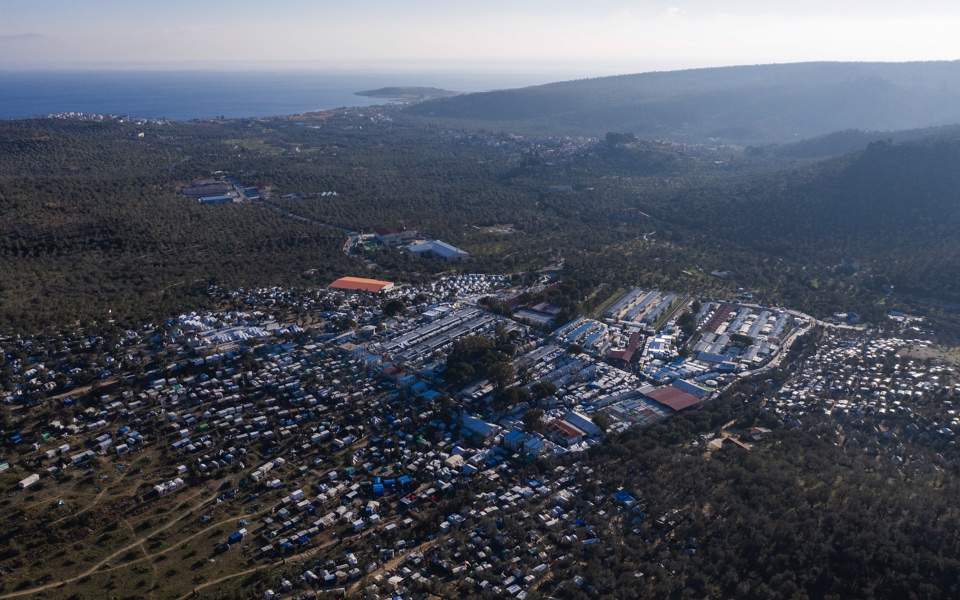 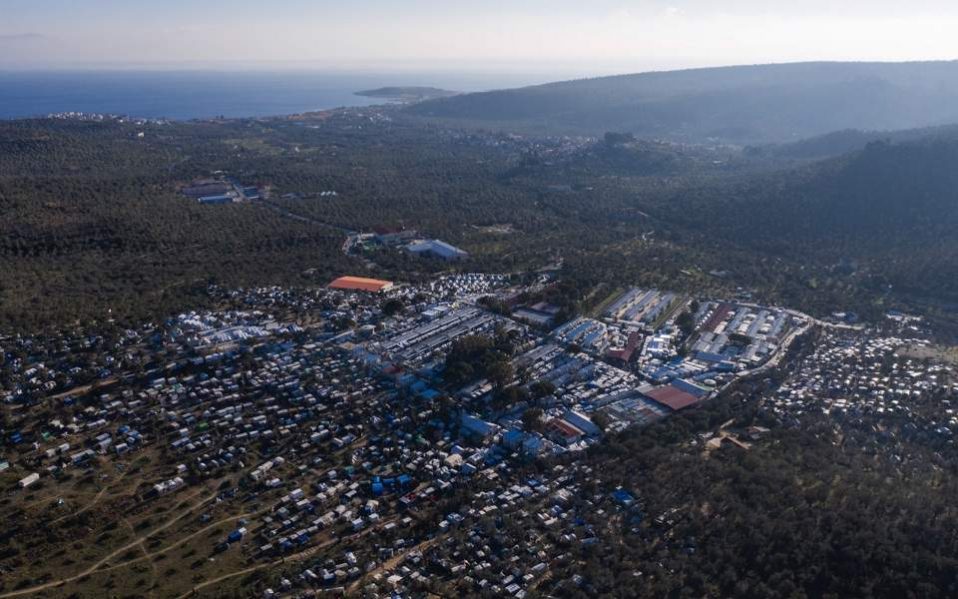 Lorna Ellwood and Felix Lempriere write about a recent trip to Moria, Lesvos.

Moria refugee camp is situated on the Greek island of Lesbos, six miles off the west coast of Turkey at its closest point. The camp itself is based at a former prison fifteen minutes drive from the town of Mitilini and is filled with refugees seeking asylum in Europe.

The camp was setup as a ‘receiving centre’ for the European Union as a result of the crisis caused by an increasing movement of people from the Middle East, which began in 2015. A bottleneck that must be passed through in order to enter Europe, it was designed originally to support 3,000 refugees and now bursts at the seams with around 20,000 inhabitants, making up approximately a fifth of the islands’ population. The main area of the camp has become increasing overpopulated causing makeshift living structures to sprawl outwards into the surrounding scrubland, absent of power and running water. A fraction of the population live in shipping containers, known as ‘isoboxes’.

If not deemed vulnerable enough to require an isobox for shelter, refugees are left to construct some form of a home in the surrounding sea of tarpaulin and tin. Lesbos is a small island and building material is in short supply – a single length of timber will cost in excess of five Euros.

Tents are a sought after resource in the camp and while they do provide a form of instant shelter, they offer little protection from the elements. In mid winter temperatures at night can drop to below freezing while daytime temperatures during summer months will peak at above 30 degrees Celsius. In times of rainfall tents and other shelters often find themselves in the path of spontaneous flows of waterborne rubbish and debris.

The majority of refugees are from Afghanistan, while others are from Somalia, Syria, Iran and west Africa. The population comprises of single men, women, unaccompanied minors and families of varying sizes.

It is estimated that there are around 1,500 unaccompanied minors living in the camp, around half are ‘housed’ and are under the increasingly stretched wing of the UNHCR (United Nations High Commissioner for Refugees). The rest as far as the bureaucratic system is concerned, do not exist.

Most camp inhabitants have walked thousands of miles to stand at Turkey’s western shore, usually travelling under the cover of darkness in order to avoid detection. Smugglers then charge large sums to escort them across the Mitilini Strait to the northern beaches of Lesbos in various water crafts. Adverse seas and the fact that many of these boats are not fit for the crossing has resulted in countless lives lost in this corner of the Mediterranean. Many have had several attempts, previously having been thwarted by border police or abandoning due to dangerous sea conditions. The position and state of the vessel will determine whether it is turned back towards Turkey or guided to Lesbos, establishing a sort of high stakes hide and seek. In extreme instances refugees have sabotaged themselves by puncturing and sinking their own boats in a desperate bid to be rescued and so complete this step of their journey. When the Lesbos shore is finally reached life jackets are discarded and lie piled on some of the islands’ northern beaches. Their vivid tones contrasting the native landscape as a silent narrative of this reality.

A Greek military bus pulls into the camp daily followed by a tail of Mediterranean dust. Men, women and children spill out of the excessively armoured vehicle having been plucked from the beaches and surrounding sea, often visibly wet and cold. They carry the few personal items that have not been lost on the journey along with dreams of a future where their lives are not threatened. Moria greets them with ID papers, food packets, house sized piles of rubbish and graffiti reading ‘welcome to hell’, all preceding a mass of humanitarian chaos.

These refugees have fled their native homes primarily in the hope of a safer future. Often they flee war and the poverty and desperation that it feeds.

It is cruelly ironic then that many come in search of safety and yet find themselves in a camp that is simply not. Riots erupt some nights as darkness falls and fatalities are not an uncommon occurrence. Violence may be sparked by ethnic divisions, warring factions and frustrations with the a bureaucratic system, all compounded by inhumane living conditions within Europe’s largest refugee camp.

In some cases the current application process to gain asylum and entrance into Europe can take as long as two years. While the gears of this laborious bureaucratic system gind on, refugees are unable to work and in most cases are required to remain in the camp until given asylum. A number of inhabitants are highly educated – mechanical engineers, university lecturers, computer coders and students of medicine amongst others. They live in a kind of ‘no mans land’, heavily burdened with red tape, a limbo between one world and the next, waiting and hoping that one day they may move on.

On any given day a primary activity in Moria is queueing. Some forming in the early hours of the morning for food, bathroom facilities, to attend interviews as a part of the asylum seeking process and to receive medical attention from the on site clinic.

The small medical clinic within the camp was setup by the British charity Kitirinos and is run and funded by volunteers and donations. The staff of the medical clinic comprise of doctors and nurses from around the world, generally staying for a few weeks at a time. These temporary staff members work alongside a number of able refugees making up a permanent presence at the clinic. The refugees, who are themselves living in terribly harsh conditions in the camp give six days a week to translate and run the clinic in an effort to make some sort of a difference here.As the capacity of the clinic is limited by space and staffing, some who queue will be turned away at the end of the day having not been seen despite queueing for hours and likely having also missed the food line for the day.

People come to the clinic for all kinds of issues, some cases with simple solutions, some without. A young Afghan man who as a teenager had his arm cut off by the Taliban queued for several hours in the hope of obtaining Paracetamol to ease the pain in his scarred stump. A twelve year old boy with a serious chest infection was escorted into the camp for the first time, vulnerable and overwhelmed in a shadow cast by the mass of a stern and detached officer. This boy walked here alone from Afghanistan and now finds himself one of the thousands living amongst the scrublands surrounding the camp.

An elderly women queued for Ibuprofen as the miserable sleeping conditions on a cold hard surface has meant her arthritic pain is now unbearable. Knowing this woman will return to her inadequate shelter is a frustratingly familiar reminder that with the lack of resources at hand and the reality of the current living situation within the camp, it is impossible to have a significant impact on the true source of many problems.

There are numerous mental health cases where people come seeking guidance and support as they struggle with the wretchedness of their current ordeal and appalling past traumas. Many refugees living in the camp have been victims of torture and rape. A young man who was set on fire, an old man who was rendered blind and numerous others who suffered in circumstances impossibly awful.

While there is a small local hospital situated on the island, it has not been able to cope with the medical demand from the increased population and subsequently has been unable to provide any sort of adequate healthcare for the camp.

In the absence of charities working to better people’s lives, Moria refugee camp would be in a decidedly worse state. The problem is that these small organisations are already dwarfed by the scale of this fast growing humanitarian failure.

Personally, to find people subjected to the conditions here and within the bounds of modern day Europe ashamed me. The sheer scale of the camp is staggering and it seems unimaginable this crisis could be so little known. Life in Moria is an existence none should suffer, certainly not those who have endured such incredible hardship before reaching the gates of this hellish place.

Some of many organisations working on the ground to improve conditions at Moria include:

Movement on the ground – responding to humanitarian crises worldwide:

Together for Better days – an NGO bringing humanity and compassion into the delivery of humanitarian aid:

Refugees 4 refugees – offers sustainable support, humanitarian assistance and emergency response to refugees arriving on the shores of the Greek islands – Lesbos and Samos:

One happy family – facilitate and run a community centre on Lesbos:

“When I entered Moria several months ago I knew that Moria is a famous place for being bad. At that time the population of Moria was about ten thousand, I would have never thought Moria would have become like a real hell as it is now. I’m not worried anymore about having a comfortable place to live but now I’m very worried about my life . . . . I know politicians are decision makers and they have to be worried about the future of their nations, the future of the European Union . . . . . I know that making decisions is one of the hardest things that anybody can do. What I want them to do is to make their decisions faster, whatever you want to do with us, do it faster. I’m tired of this Moria, this limbo. It’s better to call it limbo than hell because hell is a place that you know where you are but limbo is a place that you don’t know where you are – are you going to go back, are you going to go forward . . . . I want to say that our ancestors, our politicians, our decision makers made decisions in the past that made our destiny Moria in the present time. Now I want them to make decisions to give us a promising future.”

Your ticket for the: Moria, February 2020