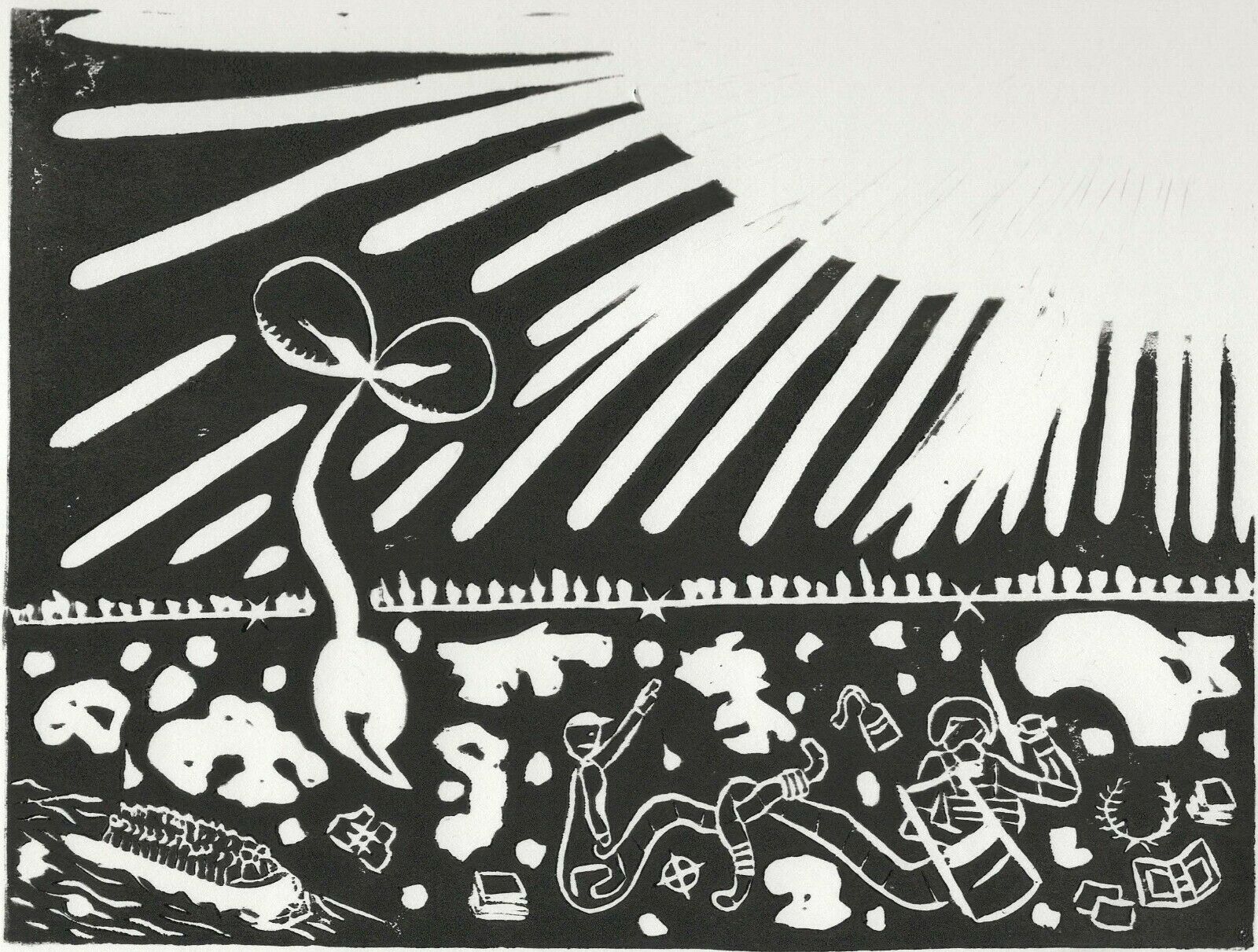 “Goodbye. I hope this is the last time we see each other.” 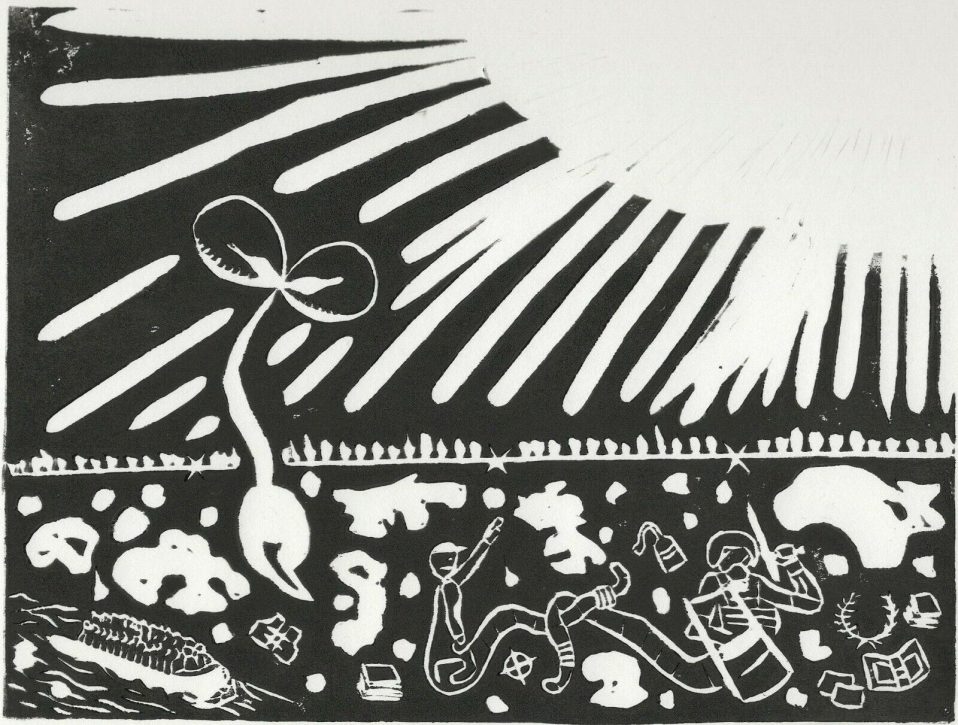 Words & Linocut imagess by Will Ascott.

Will is co-founder of Free Movement Skateboarding.
He is currently taking a break from working hard in Athens, and has been making linocuts to fundraise for FMS.

“Goodbye, I really hope this is the last time we see each other. At least here.”

A strange sentiment to leave on. I spent two years building Free Movement Skateboarding with our team and now I’m taking some much needed time away at home. The kids we work with don’t have that opportunity. Whether it’s family reunification abroad or asylum claims in Greece, nothing is changing quickly for these young people. Knowing the pace of the asylum system, it’s very likely I’ll be seeing most of the kids again in September.

It’s knowingly stagnant and painful. Today’s new arrivals into Greece can expect to wait until the end of 2022 before their first asylum interview. In the meantime, those who arrived some time back sit out this wait in under-resourced, over-populated refugee camps, distant from the city. Newer arrivals live in undignified, overcrowded squats as the government has no space left in camps. Make no mistake, this brutal living situation is a conscious political decision to deter those in a similarly vulnerable situation from travelling to Europe, meanwhile appeasing the right-wing populists. This is the human cost.

For the sake of ease, I’m going to make some generalisations about the mental state of the young displaced people Free Movement work with, but this risks playing a part in the lazy, homogeneous media narrative we have surrounding refugees. To be totally clear, their characters, values and experiences are as diverse as any other group, but psychologically speaking, there are certainly trends. The refugee crisis is a mental health epidemic. 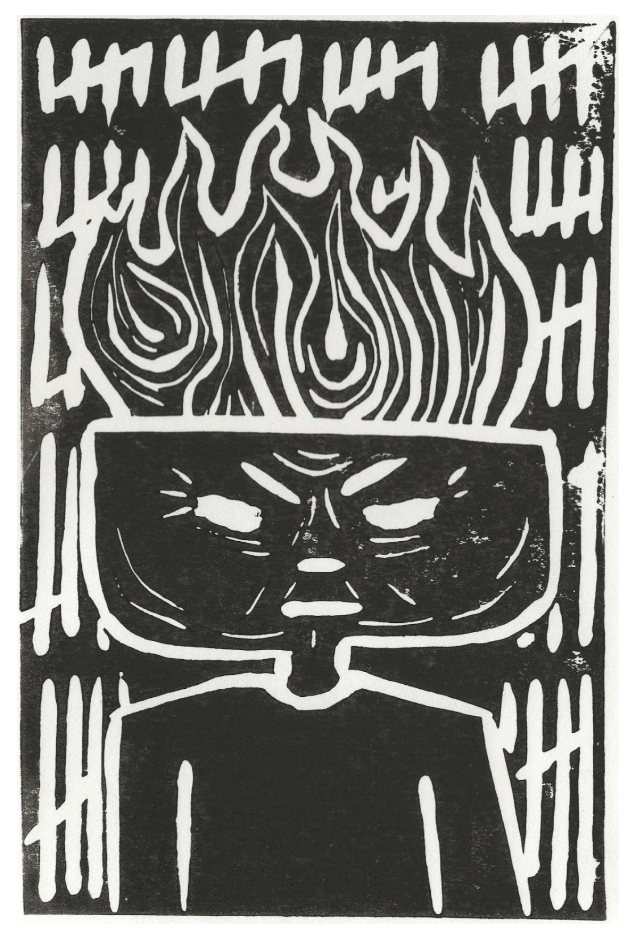 Generally, these young people have suffered significant traumatic events during their journey to Greece and now live in an environment of prolonged, isolated deprivation, be that in camps, squats or elsewhere. Many unaccompanied teenage boys rely on sex work to survive, but the saturation of this market has caused prices to drop significantly. Self-harm and suicide are commonplace. The Neo-Nazi Golden Dawn party attack non-whites indiscriminately and burn down squats. The Europe people dreamed of is a dystopian nightmare. Collectively, they suffer long-term stress – a state of tension through constant hyper-vigilance as the body is adrenalised to deal with threats, whilst mentally, the normal decision making process is impaired.

So when coupling one’s formative years in asylum limbo with unrelenting stress, it’s unsurprising the Free Movement team experience a lot of challenging behaviour, making our role closer to that of youth worker. Trauma is as varied as it is ugly, and we see this closely. Flashes of rage, violence, vacant stares, sitting mute, an inability to focus, poor danger perception, insecure relationships with adults, I could easily go on.

“The Europe people dreamed of is a dystopian nightmare.”

This places a cavernous void between our experiences: my youth in middle-class suburban St Albans was very easy, I wanted for nothing and I suffered no significant trauma – there is no comparison to be made. However, I can confidently say, over these past two years Free Movement really did me in at times. Running a charity whilst working with kids with complex needs every day is hard, but not as hard as being one of them.

It’s pretty easy for my little anxieties to niggle away and tell me there’s no value to skateboarding in this context, where crisis response quite rightly takes first priority. I have many close friends whom I greatly admire working far harder than me on projects that aren’t rooted around their life’s passion. And of course, I’m well aware skateboarding will not stop the indignity of mass migration and a purposefully stagnant asylum process. It’s an ugly world and I unrelentingly doubt the worth of my contribution to it. 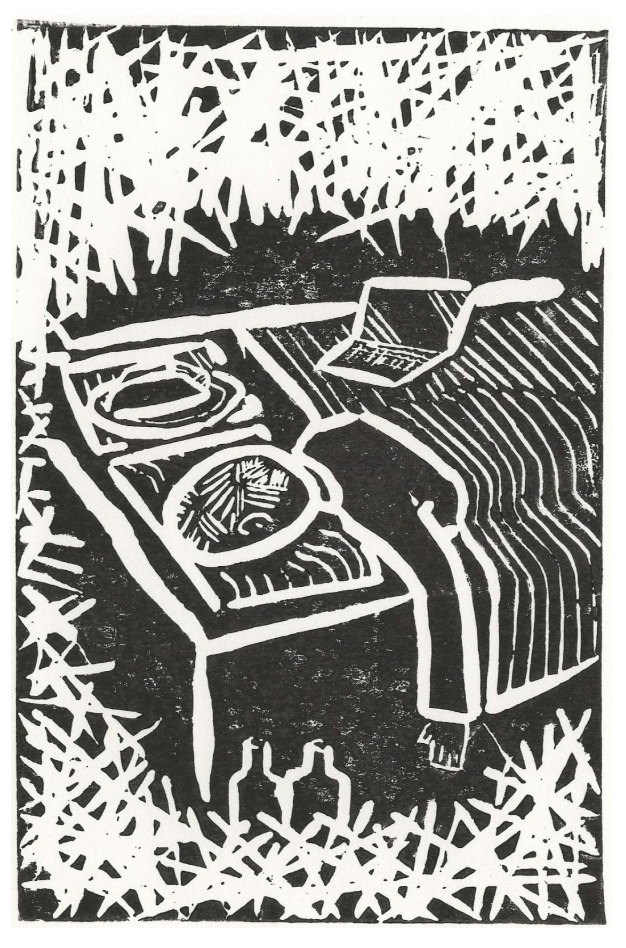 Because of this, my mental and physical health, my relationships and my motivation suffered. It got pretty dark at times. Solitude and closed curtains and three souvlakis and 6 hours of TV in bed and wanting to disappear kinda thing. What’s more, how do you reconcile these dark feelings with the guilty awareness that so many you’re close to are in worse situations? More wood for the fire.

But what pulled me through? What regulated my state of mind? Getting out the house and skateboarding. And some very good friends.

Pushing myself to learn, for the benefit of nobody else and with no point to it. Doing something new so I’ve done something new. That is a very pure thing. I’ve learnt heaps of new tricks since I moved to Athens and, while being on a board to teach every day certainly helps, I can attribute recent progress to needing to skate, needing to push myself, needing to roll away from something new. The greater the stress, the greater my need to skate, the more levelled out I feel afterwards.

Oh yeah, hang on, that’s why we started this.

I know our project makes sense, but I just don’t see it when I’m stuck in bed endlessly contemplating the scope of the disgusting situation I work in. I see it makes sense at the sessions. I feel it makes sense when I skate for myself.

It’s clearest every time I hear ‘GIVE ME SKATE’ joyfully, if forcefully screamed upon entering a camp or from watching a 10 year old Afghan girl teach a 15 year old Greek boy. It’s clear from testimonies about concentration from youth support professionals who work with these kids every day or from seeing a girl we taught go from student to paid instructor and teach in Farsi with utter competence. 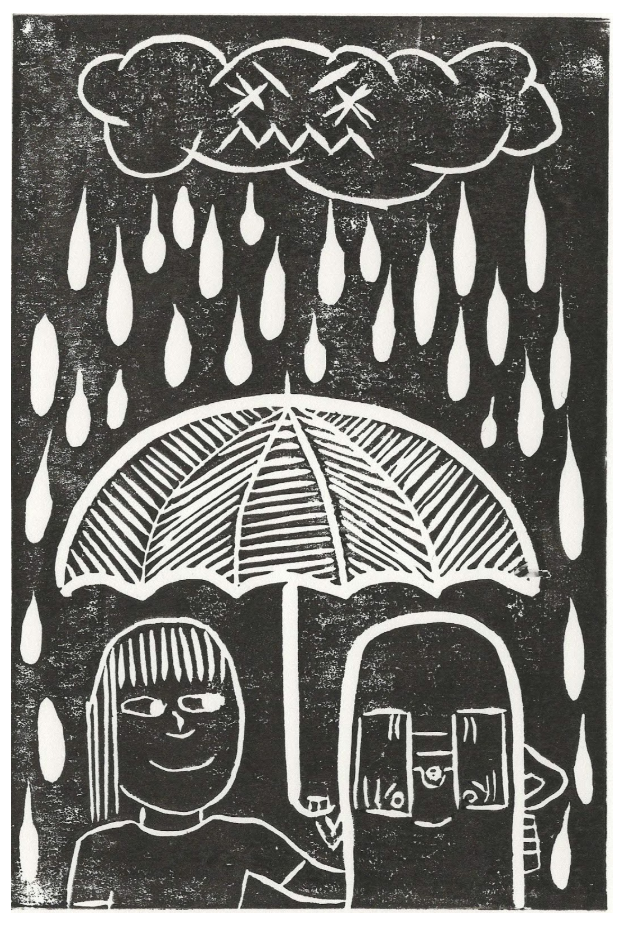 At the most basic level, these kids get the same out of skateboarding as I do, escapism. Our sessions provide a rare opportunity to focus on something physical and reform those fiery emotions into something a little more manageable, albeit for the short-term. I feel such a strong connection when I see them learn like this, and chances are, I had the same feeling at Galatsi DIY skatepark the weekend before.

But due to their situation, I can see they get more from skating than I ever did, confidence built on the board creating empowerment off the board. We see girls exerting dominance in largely male spaces, kids making Greek friends, one brave parent taking a group to a distant skatepark on the weekend. These kids defy sexist, racist stereotypes, create new communities, learn and support each other and make a dignified life in a home that can feel hostile. I’m honoured to have worked with them and they inspire me daily.

As I said goodbye to one of the most devoted kids we teach, I knew we would most likely see each other in Athens again due to slow, inhumane bureaucracy. I told her I would be studying to be an English teacher before working as such and was a little taken back initially when she told me she wanted me to go. She quickly expanded with the wisdom of a 14 year old who has had to grow up quickly. “You have to keep learning so you can come back and teach me to teach others.” Her future is uncertain, but her attitude is level-headed, curious, diligent and optimistic. In myself, I attribute my commitment to learning and self-development to skateboarding. She has these characteristics in herself and I like to think skateboarding contributed in some way – she wouldn’t be the only one. 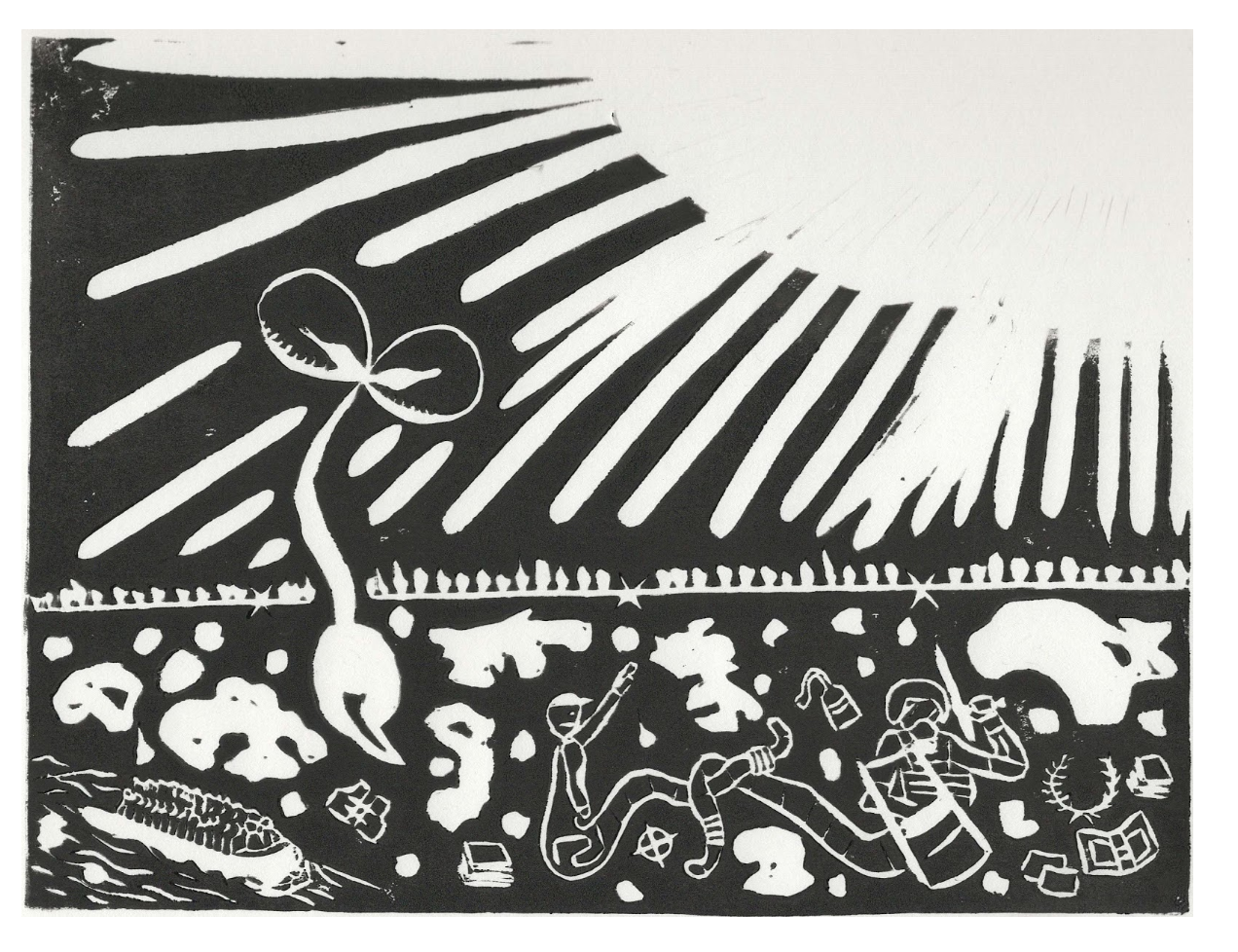 If you’d like to buy one of these wonderful linocuts, you can find them on Will’s eBay page here.

Your ticket for the: “Goodbye. I hope this is the last time we see each other.”

“Goodbye. I hope this is the last time we see each other.”