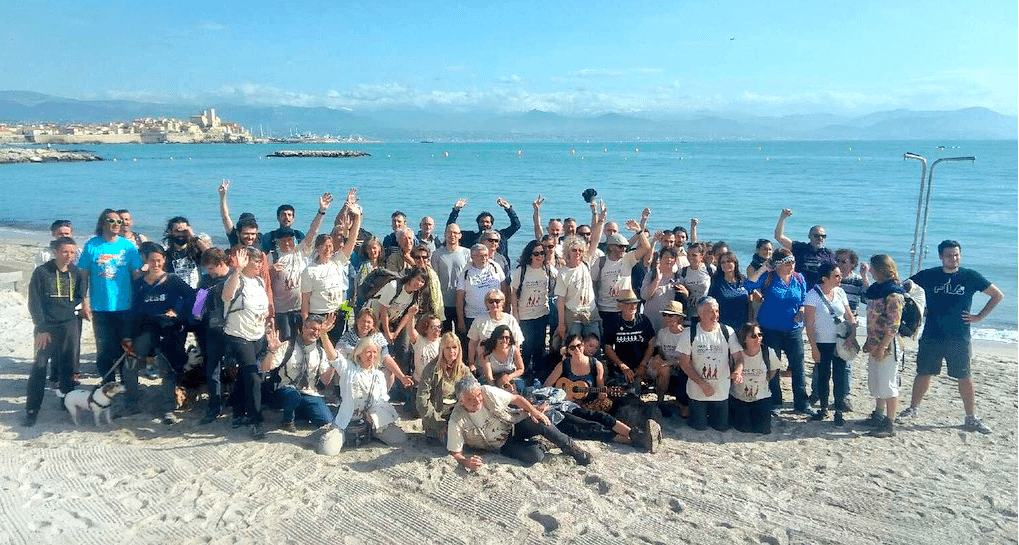 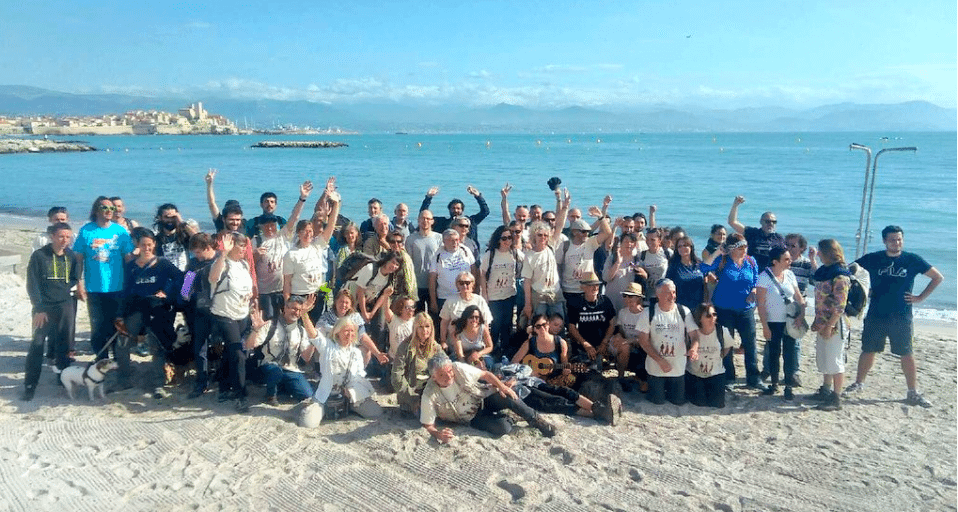 If you click here you can find a video on the stage of Thursday between Sospel and Nice. In the evening a projection of the movie Héroïque Lande followed by a debate was organised. On Friday, around fifty walkers joined us in Antibes for a 22 kilometres stage, with 120 people joining us for the shared dinner. On Saturday, the marchers entered Cannes (63 people registered) as explained in an article of NiceMatin and on Sunday Le Muy. Supporters of Le Front National with a banner “Français d’abord, clandestins dehors” (“French first, illegal immigrants out”) were gathered at the station of les Arcs-Draguignan. Media and police were present and the march was able to start without any problems. Contrary to what was indicated by Var Matin, the route-change was due to an error in the bus reservation and not due to the presence of far-right militants. Today the walkers are marching from Le Muy to Le Luc.

On the morning of Friday 4th May, a dismantling was carried out rue des Verrotières in Calais by the CRS and the border police. Displaced people were forced to move by the police, with 20 tents taken according to the Pas-de-Calais prefecture. This operation comes after a large clearing on Wednesday morning.

In the afternoon, near Rue des Huttes and Rue des Mouettes, not far from where the clearance occurred, projectiles were launched at the CRS from a group of around 50 people. According to La Voix du Nord the situation returned to a peaceful state fairly quickly.

‘The 3 from Briançon’ released before their trial

Those we call now ‘the 3 from Briançon’: Théo, a Belgian-swiss of 23 years old, Bastien, a Swiss of 26 years old and Eleonora, an Italian of 24 years old, incarcerated and prosecuted for having “facilitated the irregular entry in France” of migrants on April the 23rd, during a support march for refugees at the border between France and Italy, have been released before their trial.

They had been incarcerated in the Baumettes (a prison in Marseille). It appeared to be a reaction to communications from anti-migrant and far-right group Génération identitaire, at the same time at the Col de l’Echelle. The tribunal of Gap lifted their provisional detention stated 10 days before and placed them under court supervision waiting for their trial on May the 31st.

Their support committee gathered 200 people to ask for “the end of the criminalization of solidary citizens towards migrants” and denounces “an unbearable incarceration.” A support text written by the author and Italian alpinist Erri de Luca has already gathered more than 1000 signatures including the one from Monseigneur Gaillot, Cédric Herrou, the researcher Philippe Meirieu, Jean-Luc Mélenchon, Edwy Plenel, Alain Badiou, Eric Piolle (mayor of Grenoble), Patrick Boucheron, José Bové and many well-known Swiss and Italian names.

Glamour Paris released an article on three solidary initiatives that give hope.

The first one is the solidarity march organized by l‘Auberge des Migrants. We spoke about it earlier in this update.

The second idea is from Benoît Micolon and José Benavente who are at the origin of Pilotes Volontaires (voluntary pilots), an initiative aiming at covering international waters and thanks to that, tracking more easily migrants in emergency situations. The missions in the Colibris plane started on May the 2nd of this year in order to help sea rescuers.

The third initiative is entitled the call from June the 8th. It was launched by the association SOS Mediterranée which has already rescued more than 30,000 migrants in the Mediterranean Sea since February 2016. This call from June the 8th is an invitation to the charity evening that will be organized at the Musée des civilisations de l’Europe et de la Méditerranée (Museum of the European and Mediterranean civilisations) in Marseille on June the 8th. The program : numerous artists such as the DJ Oil and Madame Monsieur, the group who get selected for the Eurovision with a song about a young girl born on the aquarius (the boat of SOS Méditerranée). The entry is free but everyone can give what he or she wants, a donation of 30€ is equivalent to a one hour sea trip with a rescue boat. The message has been well received.

The book “la couleur de l’espoir” (“the color of hope”)

Marie Wilmer, the editor of La couleur de l’espoir will give one euro per book sold to associations that help displaced people in Calais.

Sacha Vidovic, a 31-year-old employee of the transport company STAC, has been condemned to an 18 month prison sentence for having taken two displaced people to England, according to La Voix du Nord. Vidovic is also forbidden to enter the region for two years. The driver is had used a school trip from the region of Arras, France to the United Kingdom to make an agreement with a ‘smuggler’. The phone exchange between the two was intercepted by the police. The driver admitted that “he would receive 2000€ to transport a package without knowing its content, due to the fact that he wasn’t present during the move.” In the luggage of 80cm on 50cm and 25 cm were two individuals that spent several difficult hours between the region of Arras and Calais.


This article was prepared by our partners, Refugee Info Bus, and originally published on Medium.