According to the UNHCR, women and girls make up around 50 percent of refugee, internally displaced and stateless populations. Those who are unaccompanied, pregnant women, heads of households, the disabled and the elderly are especially vulnerable.

For the past few months I have been working with several women and families living in camps around Calais. Although there are only between 5 and 10 women, and a handful of families living outside in Calais, they camp alongside hundreds of men all trying to cross the border to the UK.

Added to the daily turmoil people face living outside in makeshift camps – staying warm, accessing food, water and showers, avoiding police harassment – women here are vulnerable to gender-based violence, exploitation and everyday misogyny. As a female volunteer, the experience of being surrounded by large groups of men can, at times, be intimidating. It is impossible to fathom how it must feel as a woman living in such a disproportionate setting.

This is not to overshadow the experiences of the displaced male population in Calais. A recent report published by the Human Rights Observers team in Calais documents that between 1 November 2017 and 1 November 2018 there were 972 incidents reported relating to disproportionate physical violence, the use of teargas, destruction of personal property and other rights abuses by French police.

Lack of shelter and adequate sanitation, forced clearances occurring every other day, and police abuses of power such as the use of chemical agents and arbitrary arrests, combine to make the camps’ living environments impossible for both men and women – severely damaging their mental and physical health. But women and families face an additional set of challenges in comparison to men in the hostile environment, and must not be forgotten in the story of Calais.

In France’s official accommodation centres for asylum seekers, living conditions are similarly inadequate: we have heard reports of cockroaches, a single room for a five-person family and no food provisions or follow-up support. There is also a lack of information within the registration process, so many women and families are unwilling to put themselves forward because they are uncertain of where it will place them legally or of what happens if they are evicted from a centre (or indeed if they leave of their own volition).

A family from Kurdish Iraq refuse to go to an accommodation centre, knowing that to go through the process would stall their journey to the UK. Instead they stay, as the only family in a camp of 100 men, steeling themselves against the fast approaching winter. The four children regularly fall over in the mud as they run around playing, and their mother has no access to clothes washing facilities. Her youngest, just three years old, repeatedly stands in human faeces. They camp next to a busy road, and both parents are always watching out for their kids running across, at risk of seriously injuring themselves in an accident.

I play a game with the 8-year old daughter. She runs off, and I can’t find her for a minute. I panic, and later realise this panic must be a constant for the parents, and how this must shape their interactions with their children, and their own mental health. The oldest son, 13, has stepped up to watch over his younger siblings, and he speaks English incredibly well. He should be in school learning, not carrying the responsibility of being the translator for his family’s interactions with charity representatives. 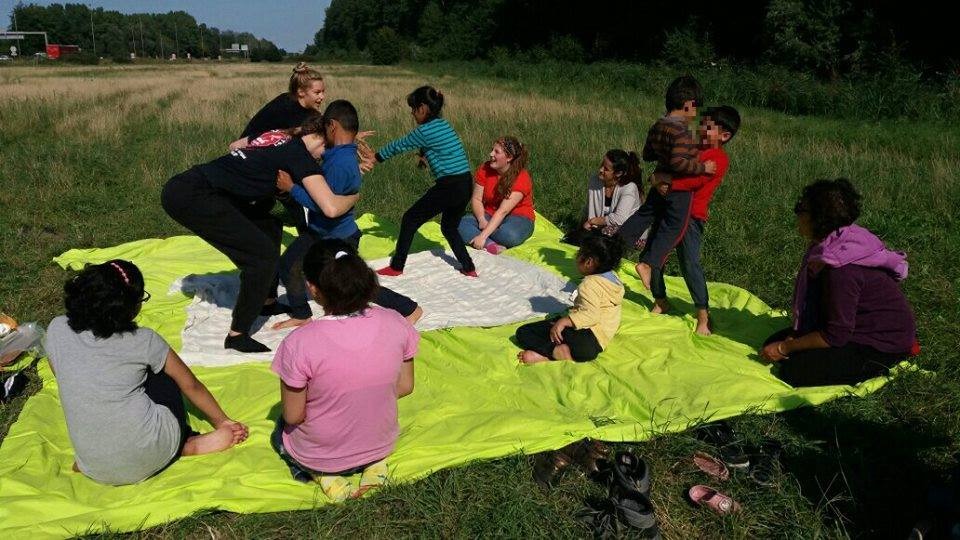 Five Ethiopian women meet us on an unlit street in winter’s afternoon darkness, near to the toilets used by two camps of over 300 men. According to international guidelines, male and female toilets in refugee camps are supposed to be separate and marked as such. The doors are also supposed to have locks to prevent sexual attacks. But in Calais, with no formal refugee camp for those attempting to reach the UK, women must share toilets with men, and have no access to proper washing facilities. This increases an already higher risk of experiencing gender based violence or sexual abuse. Without the money to pay off a smuggler, the women regularly attempt to jump on lorries, just as the men in their community do, and all have travelled independently from their country.

A woman from Iran draws a love heart in the sand. She writes two initials inside it; the first letter of the names of her husband and her child. She left them behind in Iran, and hopes to be reunited with them when she reaches the UK. But for now she is trapped in the purgatory that is Calais, pretending her friend is her husband, in order to protect herself in the male-dominated camp. She will have the option of family reunification only after she arrives in Britain, but it is impossible to know when that will be, as she must first risk her life to get there, denied the option of claiming asylum from this border.

These stories highlight the need for the UK to offer a safe passage for all people where the border is controlled in Northern France. At the moment, people risk their lives jumping on trucks, climbing aboard ferries, even, in recent weeks, sailing across on small boats. In 2015 a Syrian child washed up on Greek shores and made international headlines. Must we only accept responsibility when the same happens on the shores of Kent?

Though very little statistical information on refugee women is available, those statistics that are accessible indicate the depths of indignity, fear and violence that vulnerable women face in their journeys to safety:

Your ticket for the: Women in Calais