Why are so many people fleeing Eritrea?

I’m sitting in a waiting room in Calais, France with three young men.  They’re fifteen, sixteen, and seventeen – all here to see the doctor, all refugees. The oldest, Eferm, continues: “Is no good have money.  Money no good.”  His friends laugh and punch his arm – “No, is good be rich!” – but he shakes his head and tells me gravely that money is not important.  “Important is be happy.  I be very happy, have job and bed.”

Eferm was born in Eritrea, a small country on the Red Sea, bordered by Sudan, Djibouti, and Ethiopia.  Of its population of 5.3 million people, more than 480 000 have been forcibly displaced.  The majority flee to neighbouring countries, but tens of thousands have made it to the European Union, hoping for asylum.  There are just under 50,000 Eritrean refugees in Germany – in 2017, the tiny country came just after Syria for the number of refugee applicants in Europe.  If the same proportion of the UK were to be displaced, there would be over 7 million UK asylum-seekers in the world.

Why are Eritreans fleeing their country in such staggering numbers?

“What is no good in Eritrea?”  I ask Eferm.  “I know that everyone has to go to the army.”  He counts on his fingers: “No work, no food, army, bad government.”

Bad may be a misnomer.  Eritrea has a totalitarian government that has been in place for 25 years.  There are no elections, no constitution, and no independent press.  The slightest rumour of political activism, or even sympathy with dissenters, is grounds for immediate arrest and indefinite detention.  The United Nations Inquiry on Human Rights in Eritrea is a horrifying read, as is the US 2017 Human Rights Report.  Even the most clinical language cannot soften the list of human rights abuses: arbitrary arrests and indefinite detentions, the widespread use of torture in prisons and during military service and training, complete government control of movement and resources, and compulsory, indefinite national service.  The government maintains complete control by forcing its citizens to spy on one another – if they refuse, they might be disappeared; if they have nothing to report, they can be jailed.  Any journey, even to the next city, requires a yellow travel pass. Coupons are used to buy foods in government stores, and can be frozen at any time. The average wage during national service is equivalent to €52 a month; in a government store, a litre of sunflower oil and half a kilo of pasta cost €5 each.

Eferm was lucky to have gone to school until he was seventeen, but like all  Eritreans, at eighteen he was to transfer to a military barracks where his national service would begin.  “That’s why you left?” I ask Eferm. “So you didn’t have to go to the army?”  He shrugs. “Some people, they go fight Ethiopia people, Sudan people.  My brother, he go.  Very bad.  Fighting, very bad.  I say, better try go UK.”

Ethiopia and Eritrea have been fighting a bloody border war for twenty years.  Peace was officially and unexpectedly declared in July of last year, but the Horn of Africa, which includes Djibouti, Eritrea, Ethiopia, and Somali, is the site of economic and political power struggles between China and the USA, and European and Middle Eastern influences.  I spoke with Eferm in June, before the peace declaration, but since then, other Eritrean refugees have told me that they are doubtful that the peace will last, or that there will be other problems soon with Yemen and Sudan. And in any case, they say, there is no future for them in Eritrea. Returning refugees are often jailed and tortured, and the government shows no signs of considering democracy or changes to the mandatory national service.

“Eritrea finish.  I love Eritrea, my country. But Eritrea, me, finish,” says Eferm matter-of-factly.  When I ask him if he has family or friends in the UK, his eyes drop down to his hands.  He shows me a small black heart, clumsily tattooed between his finger and thumb.  “My mother, one month no phone.  Calais is very bad.  I tell mother is okay, no problem.  Not true, no good.  So, no phone.” 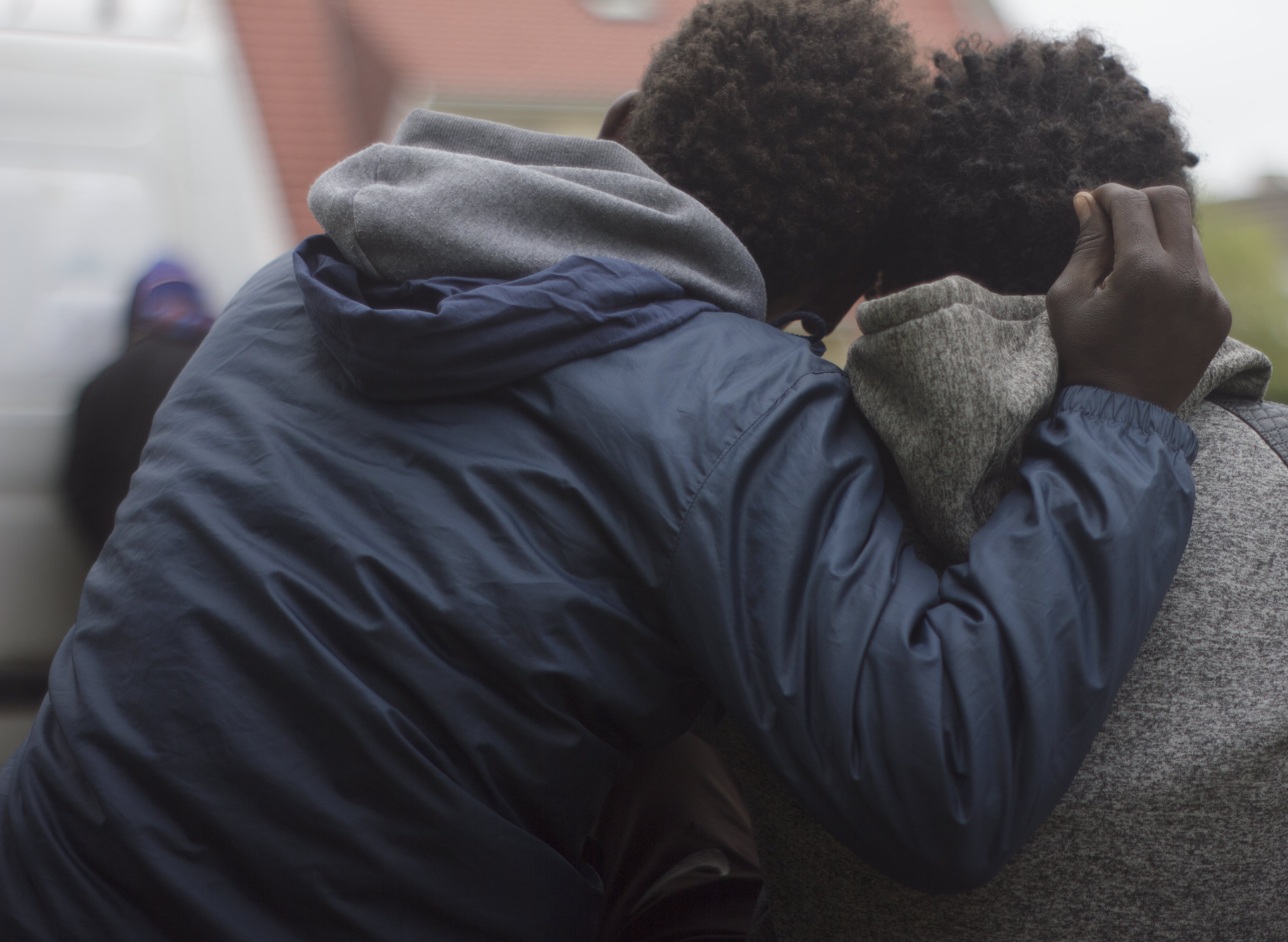 Two people living rough in Calais comfort each other outside the Refugee Info Bus, a mobile information and wifi service enabling people to connect with loved ones and access information about the asylum system in France.

I have no comfort to offer Eferm. Calais is, indeed, very bad. We are at the clinic today for the boys to use the shower: they need to wash off the scabies cream applied yesterday. The treatment may offer them relief for a short time, but they will be back to the clinic again soon; the boys are living outside in tents, and the cold weather forces them to share their infected shelters.  The organization I volunteer with distributes clean tents, blankets, and sleeping bags when we have enough donations, but we can’t keep up with the scabies – we barely manage to replace the tents and blankets taken by the police during the daily evictions.  Their clothes are likewise infected.

I sit with Eferm in silence until the nurse pokes his head in the room and beckons him to the showers. He comes back with wet hair, looking sheepish in flip-flops and a baggy t-shirt.  He holds out a plastic bag: “Doctor say, new shirt, new jean, new sock.  This no good.”  I glare at the nurse as the boys run ahead to the van – Étienne knows very well that my organization doesn’t have the resources to provide clean clothes for every refugee with scabies.  But today I’ll go to the hoppers where we keep the donations and choose a good jumper and jeans for Eferm.

A laughing, teasing crowd of young Eritreans swoops down on the van as I drop Eferm and his friends back at their tents.  They pile into the van, turn up the music, fuss with their hair in the mirrors.  Each of these boys defied Eritrea’s shoot-to-kill border policy and crossed into Ethiopia or Sudan.  They survived crossing the Mediterranean, evaded or escaped kidnapping for ransom by human traffickers, crossed through Europe, and have ended up here in Calais: so close, and so far, from  their dream of a safe haven in England.

The vast majority of displaced people and asylum seekers stay as refugees in neighbouring countries.  80% of the world’s refugees are hosted in developing countries, most in Africa. It’s a small percentage that decide to make the long, dangerous journey across hostile borders to reach the safest and richest countries in the world.  These boys are amongst that minority.  Many have family or friends that have been resettled in English towns and cities, but most of them know very little about what to expect in the UK.  They tell me that people are kinder there, less racist, nicer to refugees.  I’ve asked some of the boys if they’ve considered claiming asylum in other countries – here in France, perhaps. “France, no good.  France police, all day beat, spray,” Eferm says. He’s not wrong.  Last November the organizations I work with released a report on police violence against refugees in Calais.  Some of the hundreds of testimonies of human rights abuses were ones that I recorded myself.  After having held the hands of a crying sixteen-year-old Eritrean as he described being beaten by five police officers, I find it hard to love France, let alone tell Eferm that the asylum system is England is no better than in other European countries.

I never ask any of the refugees that I accompany to the clinic if they regret leaving their country.  I want them to look to the future, to focus on their goals – many of which are as simple as a job, and a bed. 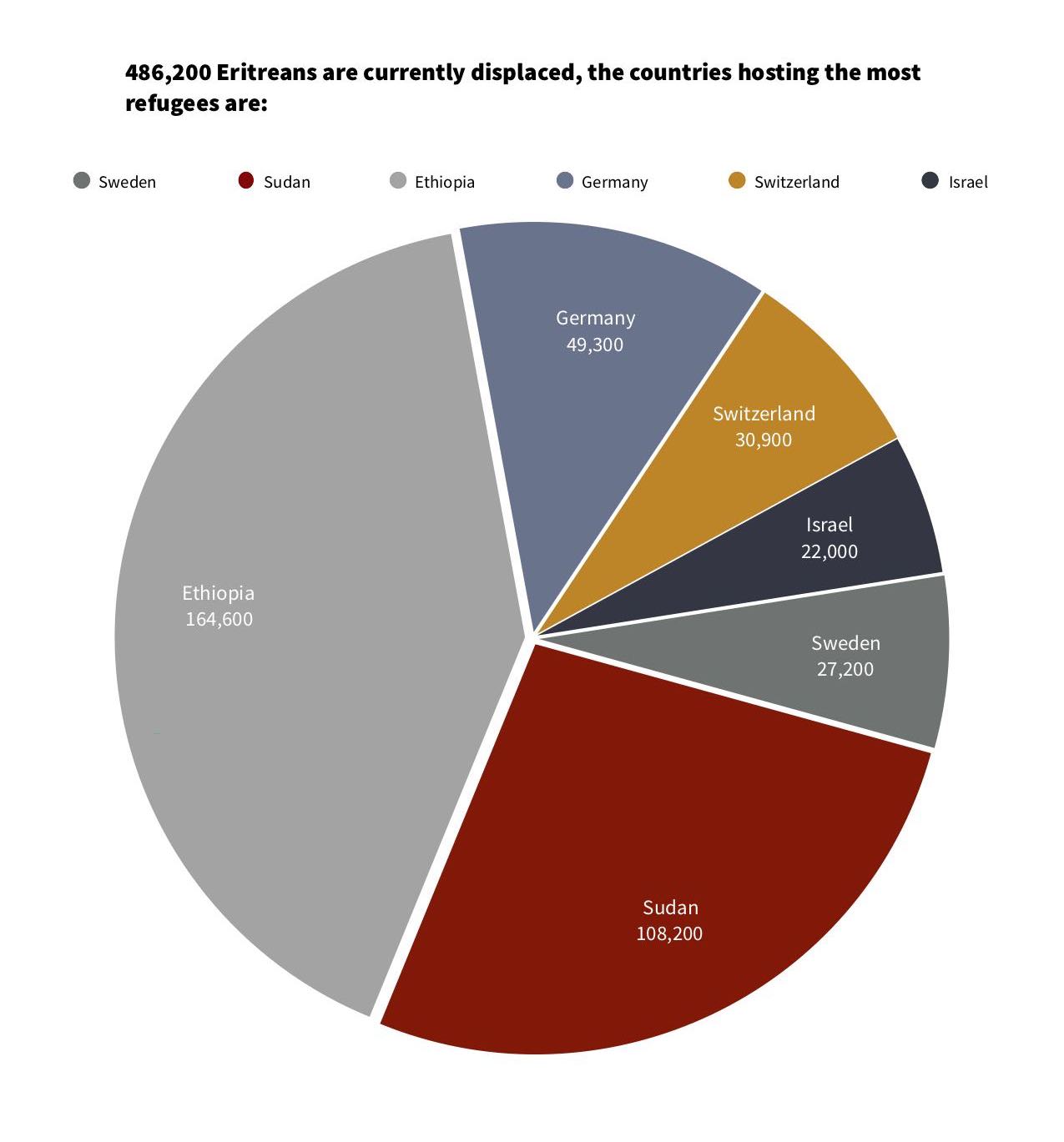 This article was written by Help Refugees volunteer Laura Heit, who currently works out of our warehouse in Calais. You can support our work here.

Header photo was taken by David Levene for the Guardian.

Your ticket for the: Why are so many people fleeing Eritrea?

Why are so many people fleeing Eritrea?