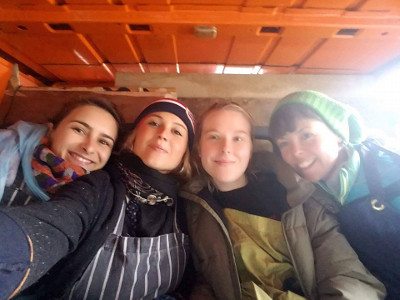 A few weeks ago, Lucy Wooding went to Calais and volunteered with our partners, Refugee Community Kitchen. Here, she shares her experience. We’re so grateful, Lucy, for all of your help – our movement has been built by people like you.

“In late October, I spent a week working with Refugee Community Kitchen (RCK) – and my experience was one filled with love, kindness and an uplifting sense of community.

I’ve always been passionate about campaigning for freedom of movement, and the rights of refugees. It made sense for me to go and see first-hand what the situation is truly like in Calais – without the influence of the media’s opinion – and how the work of wonderful charities such as RCK benefit the displaced people living in the area.

On my first day, I arrived at the industrial sized warehouse shared by charities Help Refugees, L’Auberge des Migrants and Utopia56. Newcomers were given a brief tour, an introduction to each charity does, and a health, safety and hygiene induction.

I slipped into my chef’s blacks and crocs (not the most sartorially chic ensemble!), and was allocated the job of chopping. Sounds mundane, but accompanied by friendly, self-motivated volunteers, music, and the shared goal of preparing nutritious food for the hundreds of refugees in and around Calais, the atmosphere was far from boring. 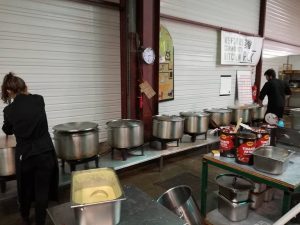 What struck me was how organised and efficiently the charity operates. Food was always distributed on time, every single volunteer had a task to do, and the warehouse was always left clean and organised. It was beyond satisfying working with a charity that is so thorough in their work.

Other jobs included washing up large drums where rice had been cooking all day, making curries and stews, operating the Robo Chopper which slices various vegetables that later go into curries or salads, making large amounts of flapjack mixture to go into the oven, peeling and washing onions and garlic (some volunteers wore goggles for this part!), loading the vans ready for food distribution and sorting through the food donations which were delivered to the warehouse.

The working day began at 9 (some volunteers arrived earlier), and finished generally around 6:30-7pm. There’s also a lunch break in between where volunteers eat what we’ve made – the food is really tasty! As we ate together, volunteers spoke about their day so far, or their opinions on the refugee crisis, articulating how dehumanising and cruel the situation is. Even though the crisis in Calais is far from solved, it was empowering to know that teams of proactive volunteers are making the situation slightly more bearable and humane. 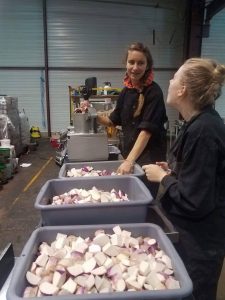 My favourite part of the day was going on a food distribution.

We filled up the van with gastros of rice, curry and salad and drove out to the site. This is where I had the opportunity to see what was really happening in Calais.

Each area has different cultural demographics. The refugees in Calais are Ethiopian, Eritrean, Sudanese or Afghan. They are mostly young men. In Dunkirk, there are more Kurds, Afghans and Syrian families with small children.

When I told people I was volunteering in Calais, the response was somewhat mixed.

My family were incredibly encouraging and positive, but others told me that it wasn’t safe in Calais, and that there was fighting in the “camps”.

To set the record straight, there is no “camp” in Calais. The destruction of the Calais Jungle happened in October 2016, yet there are still refugees residing in Calais, left sleeping in the woods, on the roadsides or around river banks. The local police take away their tents and blankets, regularly throw tear gas, shoot rubber bullets or conduct beatings. “How can it be right – 1 refugee and 4 police officers beating us?!” said one Sudanese refugee.

Secondly, it is not unsafe to work with refugees in Calais. During each distribution I was met with cheerful phrases such as “Hello Sister, how are you today?”, and countless amounts of thank yous and smiles. They have every right to feel groggy, since they are cold and hungry, yet they display such grace, dignity and appreciation as they wait for their meal.

Despite rampant police brutally, unforgiving weather conditions and the uncertainty of whether they will seek asylum or not, the refugees I met were filled with joy and laughter.

I spoke to a group of young Ethiopian males, who were cracking jokes and dancing to the music we played from the radio of the distribution van. One told me that when he gets out of France, he would love to meet Wayne Rooney. “One day I can take a picture with Wayne Rooney at my birthday party” he cheerily said, as he pretended to take a selfie.

Despite meeting individuals who displayed a positive demeanour, the harrowing situation that they face was obvious. It was a stark reminder that when we’re moaning about our first world problems, we should be mindful of those who are in far worse conditions.

My experience with Refugee Community Kitchen was uplifting, and I will certainly volunteer with them again.

I met countless amounts of interesting and welcoming volunteers from different countries and walks of life.

It doesn’t matter if you are volunteering for a day, week, month or more, your help is greatly appreciated. If you’re thinking about volunteering with RCK – just go for it! There is no time like the present – the refugee crisis is a very real issue and happening NOW.

However, if you can’t volunteer for whatever circumstances, I urge you to donate instead. Visit RCK’s website to find out their latest needs, and how to donate.”

Still Feeding the Need: Supporting the refugees in Calais from Mark McEvoy on Vimeo.

Help Refugees has supported RCK since they began cooking in Calais almost two years ago. Since then, the wonderful team has cooked every single day – and served an epic 1.5 million meals!

To help us continue to support refugees in Northern France – with everything from food to bedding – please donate here. Winter is coming, and we need your help more than ever. Thank you.

Your ticket for the: A Lovin’ Spoonful: Lucy’s experience with RCK