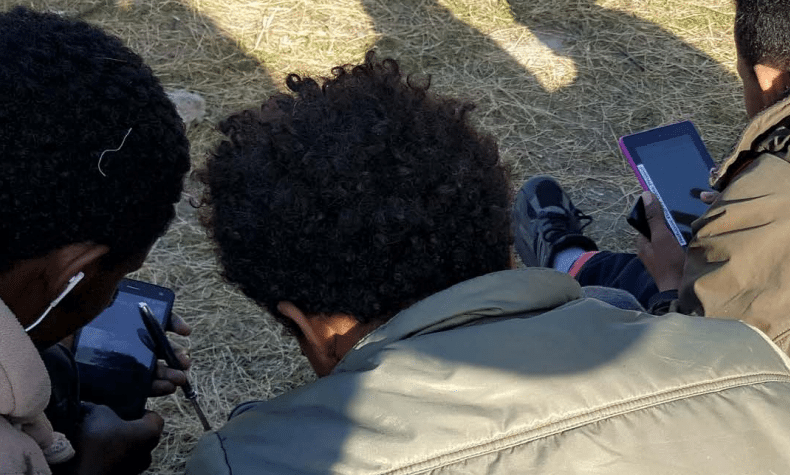 17-year-old Eritrean refugee Senay was interviewed by the Home Office in the Calais Hospital in October 2016 on the same day the rest of the children in the Calais camp left to accommodation centres across France. He had injured his finger while attempting to climb into a lorry and his hand was tied up in a heavy bandage. The day after his interview Senay was taken directly to French state accommodation for unaccompanied refugee children in Saint Omer, a short distance from Calais, but after several days in the centre, Senay ran away and ended up sleeping on the streets of Paris.

Senay’s parents both died separately due to illness in Eritrea and so he lived with his last remaining relative in Eritrea, his Uncle. In 2016 Senay was forced to flee Eritrea because of political and religious fighting and because as an adolescent he was at risk of kidnap and conscription. He’d crossed the Sahara Desert and entered Libya before travelling across the Mediterranean to Italy and onwards through France to Calais. His Uncle and Aunt live in Leeds and have been anxiously waiting for him to arrive.

Five months after the interview and Senay had heard nothing from the Home Office. While the majority of family reunification cases in accommodation centres across France were either brought to the UK or received a rejection via their accommodation centre in December, Senay has received no refusal, no explanation and no avenue to appeal any decision. His family in the UK equally have heard nothing from the Home Office. Deeply anxious about the situation, they both wrote a letter to the Home Secretary asking her to take action on Senay’s case, but the reply that came back appeared to misunderstand the situation and offered no solutions.

Senay became disillusioned with the legal process and returned to Calais to try from there to reach the UK and his family. After six nights of attempting to reach the UK by climbing onto lorries and sleeping outside in fields, he decided to return back to Paris, to sleep, wash and rest. But on the 7th of March, he returned to his accommodation centre, late at night, to find that the centre staff had given away his bed to another minor. FTDA who run the centre and are mandated for child protection, did not provide Senay with alternate accommodation at the time – even though he is a child. He had nowhere to sleep that night. Since then his phone has been off and his family have been unable to contact him.

Volunteers from various charities have searched for Senay in satellite camps, Calais and on the streets of Paris. Detention centres in Paris have been phoned, as have some accommodation centres for unaccompanied minors. Six weeks later and Senay has still not been found.

This information was gathered by our long-term volunteer Benny Hunter.

To help us continue to support unaccompanied minors and those in need living in Calais, Dunkirk & across France, please donate here.

Your ticket for the: UNACCOMPANIED MINORS IN CALAIS – SENAY’S STORY