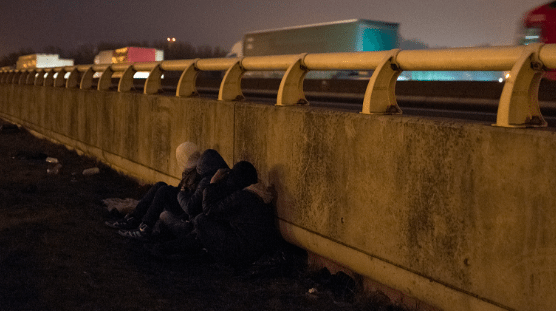 16-year-old Mustafa speaks great english, even though he never attended school. He speaks Dari, Pashtu and Urdu also, which he learnt from obsessively watching Bollywood films where he grew up in rural Nangarhar, Afghanistan. On his family’s farm he looked after sheep and helped out with chores, until as a teenage boy he was given the opportunity to travel to Kabul and learn english on an intensive course put on by an INGO. He had hoped to make a career as an interpreter, but when he returned home, life suddenly became very dangerous. His cousins, members of the Taliban, were angered by his new language skills and so kidnapped him and for over a month they held him in a compound and tortured him – as a result he has bad scarring up both of his legs. Later Mustafa escaped and found his way home, where there was no sign of his mother or sisters. Knowing he could never be safe in Afghanistan while the Taliban were there, a friend of his family gave him the money he needed to flee to Europe.

Nine months later and Mustafa now lives in East London with his Uncle, Aunt and two young cousins, both born in the UK. He tells stories about the fun he has playing with them and how they’ve made it their mission to perfect his English. Now he has a family, he has his own room and he has his big plans for the future. But the last nine months travelling overland from Afghanistan and living in the Jungle in Calais have changed him. Mustafa says is the biggest difference now for him is feeling safe. “In Calais we couldn’t move around because it was too dangerous. Some people were killed in Calais and here we are safe.”

In Calais, Mustafa shared a two-man tent with another boy on the edge of the dusty main road into the Jungle. He used to cook his meals while sat on an overturned shopping trolley, over a wood burning stove in a flooded ‘kitchen’ tent. In the camp he regularly had his belongings stolen, including the phone he used to contact his family in the UK and one time he came back from being with friends to find his tent wasn’t where he had left it. One evening, Mustafa camped out with a sleeping bag outside the immigration office in the centre of town so that he could beat the morning queue. That night he was ambushed by a large group of angry local men who came at him with knives. He ran for his life and hid in a garden, where he was able to contact a volunteer who came in a car and picked him up. He still thinks about this incident “You know what happened to me there in Calais”.

In London, life has been calm but slow. He gets to spend time with his family “Sometimes we get together with each other, we sit together, we eat together, that is a great thing for us.” He’s made friends locally including one boy who was in Calais too “We just met in the park. Some of the Afghan boys want to play cricket so they were coming to our local park and we were getting together. After that we get together to play more cricket.”

Having waited four months since arriving, Mustafa has finally been told he can attend the local school next week, after the Easter break. He’s looking forward to meeting new people, to improving his english some more and studying computer science. “At home we have a small computer. I’d love to learn about computers more.” In the future he’d like to go to college.

Every Wednesday Mustafa goes to The Children’s Society in London to meet other young people like himself who have been through similar experiences. One day they took the group out on a trip ten pin bowling (something he’s never experience before). Last week he had his asylum interview with the Home Office that lasted four hours. They asked him about his statement, but he was told by his lawyer that it went well, so he’s happy.

This information was collected by our long-term volunteer Benny Hunter.

To help us continue to support unaccompanied minors and those in need living in Calais, Dunkirk & across France please donate here.

Your ticket for the: UNACCOMPANIED MINORS IN CALAIS – MUSTAFA’S STORY