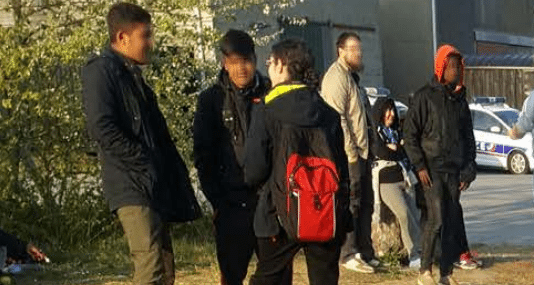 Aklilu fled Eritrea after he finished his S4 exams because he was afraid he would be forced into the military, like many boys his age are. At 14 he travelled overland across the Sahara along the Libya route with a friend who is now in Switzerland. His friend Mikael, who now sits with him in on some boulders in a field in Calais’ industrial zone, came from the same village as him, near Asmara. Aklilu arrived in Europe two and half years ago and spent two years in Germany during which time he claimed asylum before months later being rejected. Now 16 and sleeping in the woods and in fields around Calais he sees the UK as his final hope. He has an uncle and friends there and he believes, a chance at a new life.

Like most children living on the streets in Calais, Aklilu and his friends have experienced much police intimidation and violence. On one occasion Aklilu was outside the stadium in town, heading to the supermarket to buy some juice and was followed by five police officers. He and his friends tried to outrun them but they caught up. Aklilu’s friend 15-year-old Fitsum proudly explains that Aklilu stopped to try to protect his friends, and Aklilu grins but looks unsure. On that day, he says that a policeman repeatedly punched him in the face until he was bleeding from the lip. They then put him in a van and held him at the police station for an hour before releasing him. They did nothing to address Aklilu’s injury.

Some days later he was with friends at the lorry parking when the police encircled them. His friends escaped but Aklilu was caught while attempting to cross the highway. Police officers repeatedly hit him with a baton on his back, his legs and on his hand where he has a bleeding gash in a crude sticky bandage as a result. Afterwards they let him leave. That evening the police beat many people, the boys explain. Aklilu watched as a patrol lay into a boy his age, who now walks with a limp. They say they live in fear of being attacked, and are regularly tear gassed or woken at night from where they sleep.

As Aklilu finishes speaking, a patrol of five policemen emerge from the woods nearby and surround us. They give Aklilu and his friends a full pat down, checking each of their pockets and demanding to see their papers. We all wait half an hour before a van arrives and the boys are loaded in and driven off. Four hours later, having spent the rest of the day in the police station, they are released back into the town, where they can expect to later run into the police once again.

This information was collected by our long-term volunteer Benny Hunter.

To help us continue to support unaccompanied minors and those in need living in Calais, Dunkirk & across France please donate here.

Your ticket for the: UNACCOMPANIED MINORS IN CALAIS – AKLILU’S STORY