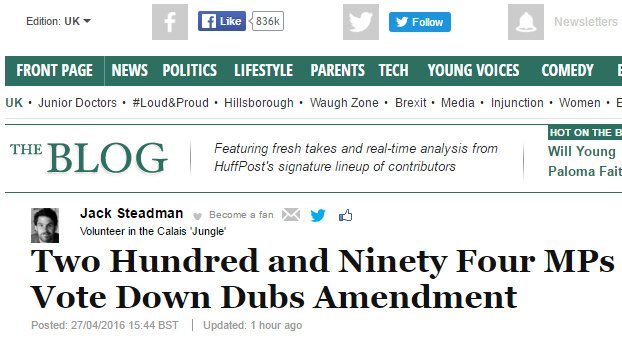 On Monday night, 294 MPs voted against the Dubs Amendment to the Immigration bill, tabled in the House of Lords, which would have seen the UK accept 3,000 unaccompanied child refugees from Europe. Two hundred and ninety-four. That’s the same number of unaccompanied minors Help Refugees found in the Calais ‘Jungle’ in their latest census. I have been working on the ground with Help Refugees since September. The first time we carried out a census – shortly before March’s eviction of the southern part of the camp – there were 423 unaccompanied children in the camp. Since then, 129 unaccompanied minors have vanished, unaccounted for, just 20 miles from the shores of the UK. I dread to think what number we will find when we complete the next census this weekend.

I have seen the CRS – French riot police – fire tear gas indiscriminately into the family field in Calais countless times, and yet in Monday’s Commons debate, 294 MPs voted against the Dubs Amendment on the basis that Europe is safe for children on their own. In Calais, less than 10% of child refugees feel safe, according to the Refugee Rights Data Project. They mainly fear state violence. France Terre D’Asile is the government-mandated organisation for child protection measures in the ‘Jungle’, and yet they have made zero effort to even register unaccompanied minors. Both the camp’s Women and Children’s Centre and Youth Centre have asked France Terre D’Asile to visit the camp for months, but so far they have managed one measly visit. The most they can provide is a five-day respite for a handful of children at any given time, before sending them back to the ‘Jungle’.

Before the latest eviction even started, I witnessed the government-employed Office for Immigration and Integration attempting to march some lone Afghan boys onto buses to accommodation centres across France. The minors didn’t even have time to pack their bags.

They had been told: “Jungle finish, one hour, we go.” OFII had no translators and one 14-year-old even thought he was going to England. Save the Children were there too, and have since condemned the actions of the French authorities. The incompetence of these organisations is symptomatic of a wider system that is consistently failing refugee children who have made it to Europe.

Europol conservatively estimates that at least 10,000 child refugees have gone missing since arriving in Europe last year, with many taken by criminal gangs and sexually exploited or sold into slavery. Given that 95,000 unaccompanied minors applied for asylum in Europe in 2015, with some estimates suggesting up to 270,000 arrived in total, the 3,000 children suggested in the Dubs Amendment is just a drop in the ocean. But it would have been a start, and it is the bare minimum our country can do to help vulnerable children on our doorstep.

Do the 294 MPs who voted against the Dubs Amendment really believe that we should do nothing to help these unaccompanied minors in Europe? Perhaps they are afraid of seeming weak on immigration before the In/Out Referendum. On Monday’s showing, the only argument they could muster against the UK taking in 3,000 child refugees was that in doing so, we would create a ‘pull factor’ and encourage more to come. But these children aren’t being ‘pulled’ into Europe by the possibility of safety in the UK, or anywhere else for that matter. Rather, they are pushed across the Mediterranean by the certainty of war, terror and persecution.

Some 45% of the child refugees in Calais have family in the UK. That is why they want to go there, and family reunification is their legal right, but they are ignored by a government that would rather smear them as a ‘bunch of migrants’. The cruel truth for most of those children is that the best chance they have of reaching their families is by risking their lives attempting to enter the UK by boat, train or truck.

Between 1938 and 1939, the British government – a Conservative one, at that – took in 10,000 Jewish child refugees fleeing persecution in Europe. Nobody thought that would solve the whole problem then, but it had to be done to protect the most vulnerable. We cannot turn our back on their modern equivalents.

It’s ironic that the habit of harping on about what once ‘made this country great’ so often characterises the same types who voted against the Dubs Amendment. It’s ironic because, if anything ever ‘made this country great’, taking in Jewish child refugees with the Kindertransport scheme and securing rights for refugees after WWII most definitely did. If anything meant ‘British values’, I would like to think that did. We led the way then and we should lead the way now.

The House of Lords have voted the Dubs Amendment through again. Write to your local MP and sign the petition to make sure the House of Commons decision is different next time.

Jack is a volunteer with Help Refugees. For more info or to donate, go tohttp://www.helprefugees.org

Your ticket for the: Two Hundred and Ninety Four MPs Vote Down Dubs Amendment