“The bomber disguised himself as a journalist and detonated himself among the crowd,” AFP quoted a police spokesman as saying. At least 29 people have been killed by a twin suicide bomb attack in Kabul, Afghanistan, on Monday morning (30th April 2018).

The blasts, which went off in the Shash Darak area of central Kabul, have been claimed by ISIL (the Islamic State of Iraq and the Levant, or ISIS).

At least 49 people have been wounded by the attack, according to police spokesman Hashmat Stanekzai.

Among the victims are nine journalists, including a camera operator for a local TV station and an Agence France-Presse photographer.

“The bomber disguised himself as a journalist and detonated himself among the crowd,” AFP quoted a police spokesman as saying.

In another incident on Monday, a suicide bomb attack in the Kandahar region killed 11 school children and injured many more. NATO forces have a base in the area; TOLO News reports that the bomb was detonated near a convoy of Romanian soldiers. 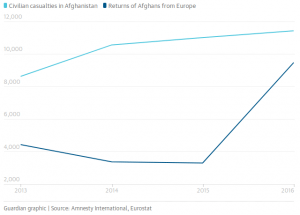 These attacks come just one week after the bombing of a voter registration centre in Kabul which killed at least 57 people, injuring more than 100 others.

In March, another ISIL suicide bomber killed 31 and wounded 65 in an attack at a Shia shrine in Kabul where people had gathered to celebrate the Persian new year.

A 2017 report by Amnesty International condemned the growing trend among EU governments of deporting Afghan asylum seekers back to Afghanistan.

“By rejecting the vast majority of claims for asylum by Afghans, the UK is setting a worrying precedent which risks encouraging other countries to do likewise,” said Kate Allen, director of Amnesty International UK. “If the government doesn’t stop deporting Afghans, it will have blood on its hands.”

Since 2015, an upsurge of violence – by groups including the Taliban and the so-called Islamic State – has further destabilized the already fragile country. 2016 was the most deadly year for civilian casualties in Afghanistan, and in that year alone, approximately 653, 000 people were internally displaced by conflict and violence.
In January this year, a report by the Norwegian Refugee Council found that more than 7 in 10 Afghan refugees who return home become forcibly displaced again due to violence.

Your ticket for the: Twin suicide bombing in Kabul kills more than 29 people