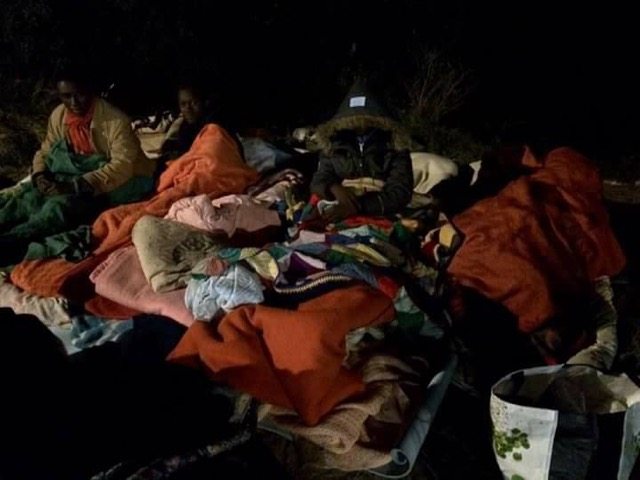 Registration of children ended at 1pm. The reason is unclear.

At noon, the prefecture reported that there were ‘no migrants left in camp and that the operation to clear the camp was being completed.’  This was picked up by some UK and French press, despite teams and media on the ground putting out live evidence to the contrary.

50% of shelters were left standing at this point and 50% were destroyed.

Last night, dozens of children slept on the cold ground in front of the containers they were supposed to be housed in. Another 40 slept in a school. Volunteers have watched over them, when no one else would. They were not given accommodation because they hadn’t been registered. They weren’t registered because registration for minors was closed at 1pm yesterday, and hundreds of children were sent back to the Jungle. There were fires all over the camp, and it was unsafe for anyone to enter. Residents, including the minors, spent hours on the outskirts waiting to find out where they would sleep.

The Prefete Fabienne Buccio stated their “mission was accomplished”, the Jungle is empty, all children are in state protection. That is a lie. We are terrified that hundreds of children have been forgotten and will not be granted the protection they deserve.

This morning, at least 100 children were waiting in the minors’ line to be processed at the registration centre. The centre was closed, and no officials present.

They queued peacefully for hours this morning. They were then told they would not yet be registered and were sent back to outside the container camp, where they are refusing to let them enter without wristbands. Police have now been arresting and forcibly removing children with no explanation or translators. This has happened to children with and without wristbands. Please alert your MP that the home office must do more on the ground protect these children.

All residents must be registered by 2pm. Any minors or adults found without wrist bands by that time will be arrested.

Your ticket for the: Third/Fourth Day Calais Eviction Update