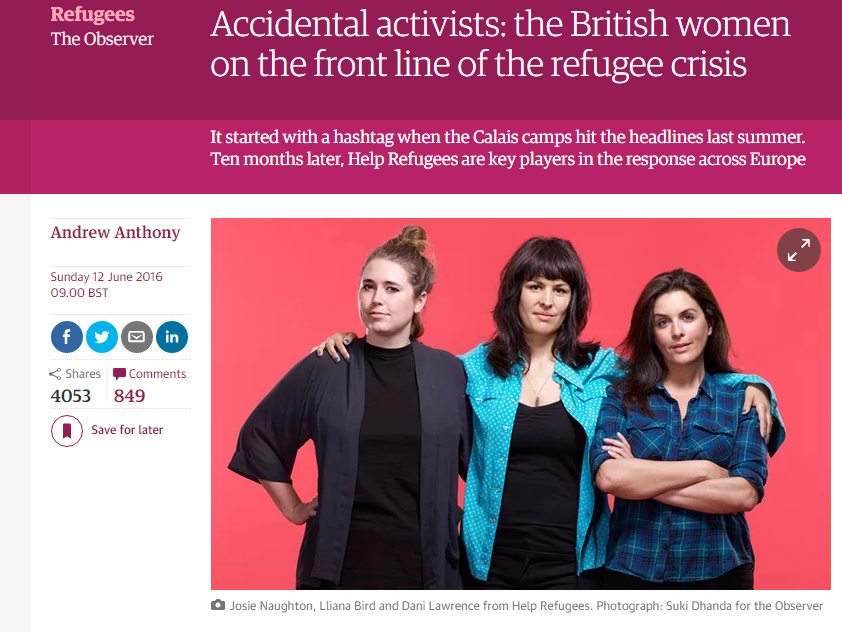 The Observer – ‘Accidental activists: the British women on the front line of the refugee crisis’

Help Refugees began in August 2015 and has swiftly grown into one of the primary humanitarian organisations dealing with the refugee crisis in Europe. Help Refugees has grown organically, often shaped by our core team alongside the hundreds of short and long term volunteers who have joined the collaborative movement of people directly helping other people. Here our two founders and director tell their story to the Observer. If you wondered how Help Refugees all began please read on…

Accidental activists: the British women on the front line of the refugee crisis

Last August Lliana Bird and Josie Naughton were just two friends with interesting jobs in London, vibrant social lives and a good set of contacts. Bird, who is 34, is a writer and radio presenter, and 31-year-old Naughton had spent 10 years making her way up in music management to work for Coldplay. They had beliefs and ideals, and had gone on the odd march, but they weren’t activists. Political engagement did not go much beyond putting up an opinionated Facebook post. Then the refugee crisis began to encroach on the holiday headlines and, like a lot of people, they both wondered how they might help.

Bird noticed that her old acting teacher, a Zen monk named Tom Radcliffe, had posted on Facebook saying he was going to raise £1,000, get in his car and drive to the refugee camp in Calais. She and Naughton offered to help. At a lunch with their mutual friend, the TV presenter and author Dawn O’Porter, the three women decided to start a hashtag #HelpCalais, with the aim of getting enough money and clothes together via Twitter to take a van to France.

Your ticket for the: The Observer – ‘Accidental activists: the British women on the front line of the refugee crisis’

The Observer – ‘Accidental activists: the British women on the front line of the refugee crisis’