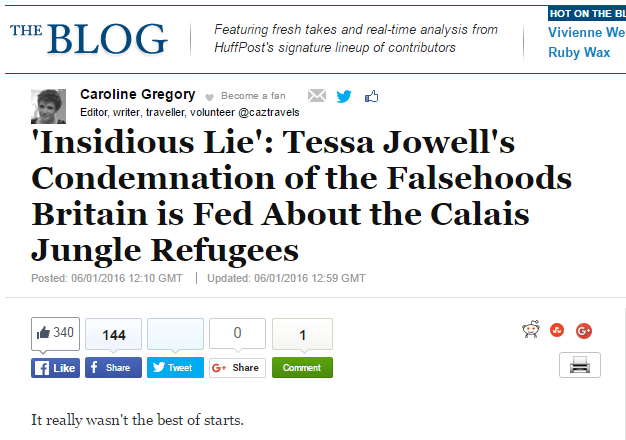 Caroline from People to People wrote this article in Huffington Post about the visit of MP Tessa Jowell and Shadow Minister for Europe Pat McFadden to the Jungle camp in Calais. Among the things Pat and Tessa saw in the camp was the warehouse run by L’Auberge des Migrants and Help Refugees. This is our central hub and is used as our distribution point for tents, blankets, sleeping bags, other essentials and food. Your funding keeps this place running.

‘Insidious Lie’: Tessa Jowell’s Condemnation of the Falsehoods Britain is Fed About the Calais Jungle Refugees

It really wasn’t the best of starts.

For a frantic half hour, I thought I’d potentially got Dame Tessa Jowell and the Shadow Minister for Europe Pat McFadden teargassed, or even worse, irreversibly affected the opinions of top political figures. I couldn’t get hold of them on the phone as I waited near the new Banksy under the motorway bridge, couldn’t get through the police blockade, and thought it was quite likely they’d decided it was just too dangerous and had turned round to head back to the UK.

It didn’t take long after meeting them to realise it would all be ok. Tessa and her daughter were feisty and tough, dressed for a day of mud and hard work.

The Calais ‘Jungle’ refugee camp is now home to around 7,000 people from countries including Syria, Eritrea, Sudan and Iraq. At Jungle Books, the camp’s library, two remarkable long-term volunteers had overnight arranged a meeting with several key community leaders.

We gathered in the newly built women and children’s classroom and library, behind the original Jungle Books. Despite our best efforts at inclusivity, we’ve learnt that the women will always slink away once men turn up, so building a special space for them seemed best. And there, in among the damp plywood, camping chairs and muddy boots, we sat and listened.

Hamoude was studying law at university in Aleppo when his young life changed forever. A day out with friends ended in witnessing their execution on their knees in front of him. He escaped the same fate simply because his name isn’t Kurdish.

Pat McFadden met Haji, an interpreter and guide who worked for the British forces in Kirkuk in northern Iraq. Haji was shot in the leg while undertaking his duties. And then left behind. Recognised and identified, he had to flee for his life with no assistance and is now living in a tent 20 miles from the country for which he risked his life.

Safdar, from Afghanistan, reiterated something we try to emphasise to all people of influence who visit the Jungle. A focus on humanitarian needs in the camp has been unavoidable; these 7,000 people are being kept alive by a mostly amateur volunteer effort from the UK. But whenever individuals in positions of more power express interest, the concern is that by further concentrating on the humanitarian side, we risk creating a situation that is sustainable rather than resolved. The phrase you’ll hear more than any other from the refugees is NO JUNGLE. This is not, as is still misunderstood by some visitors, a rejection of the name ‘the Jungle’ (the name was chosen and perpetuated by the refugees themselves, as a protest to the conditions in which they are expected to live). It is, rather, an expression of their desire to be anywhere but here, for the Jungle and the situation to end.

Jowell questioned how many camp residents are fleeing direct persecution and how many could be termed economic migrants.

The other long-term volunteers and I all looked at each other and paused. The truth is, after months of being here, not a single one of us has met even one person migrating for economic reasons. We are not naïve, but we have built up relationships with these people. I have sat with these people around fires, late at night, barriers broken down, and they have cried, revealed their scars from torture, shown me videos on their phones of friends being hung, of the bodies of their families.

Tessa Jowell was visibly shocked. In one of the most memorable moments of the day, she sat back in her seat and described the myth of economic migrants rather than refugees as an “insidious lie” that is being perpetuated through the media and believed by the public.

The fact is, not only are these people genuine refugees, but they have no idea about the benefits system in the UK. Ask them, subtly, and you quickly find out that they neither know nor care about what they might be ‘entitled’ to in Britain. Their reasons for heading to Britain specifically, as opposed to other European countries? Almost all of them speak at least some English, almost all of them have close family members in the UK, and perhaps most shocking of all, many of them have previously lived and worked in Britain for years. Some of my friends in camp sound more British than I do.

One of the most alarming aspects of the Calais Jungle is the unaccompanied children. It is difficult to comprehend in 21st century Europe, but there are minors who have lost all their family living with siblings or unrelated refugees. We met a group of boys along with Liz Clegg, who runs the women and children’s centre (just another tent) on site and is without any doubt the most essential volunteer of all. I watched as Liz, who sleeps on the floor of the tent at night, passionately explained the issues, breaking off frequently to maintain calm among the lads who were exhausted. They’d been up all night. Yes, the unaccompanied children try for the trains too; why wouldn’t they? There is no way of stopping them and it is seen as the only hope. Liz described having to wait each day to see if they turn up safely. She detailed how the police spray CS gas directly into the faces and mouths of the boys. How the gendarmes sometimes take away their shoes, simply to make the walk of several hours back to the Jungle that much harder.

A longer-term solution is becoming more and more imperative. We’ve been lucky with the weather so far; no cold snaps, very little frost. If that changes later in winter, there seems little doubt that we’ll start to see conditions-related deaths. So while we wait and push for politicians and influencers to take action, in the meantime the humanitarian effort continues. It is little more than self-organised amateur volunteers, mostly from Britain, who have been keeping these thousands alive so far.

I took Pat, Tessa and Jess to the warehouse hub to see some of this volunteer effort. French charity L’Auberge des Migrants and British group Help Refugees work together from here to build shelters, cook food for thousands and send out daily distributions of tents, blankets and sleeping bags. The guests got stuck in right away, making up welcome packs for new arrivals to the camp.

I asked if they thought that the government as a whole is aware that thousands of members of the British public are and have been travelling over to Calais, sometimes weekly, to help out. This is in addition to the many that have simply left their homes and even careers behind to live here temporarily. It is heart-warming aspects like these, and the mountains of donations in the warehouse, that contrast starkly with the deprivation and hardship of the Jungle and the on-going police brutality.

Jowell made an impromptu and emotional speech to the volunteers and remarked on this juxtaposition of suffering and hope.

“It has been an amazing day, seeing just a little of what happens here. Thank you for giving the most valuable thing of all, your time.”

I know that the main thing we want to say back is along similar lines. Thank you for coming, and now please – we need a little of that most valuable thing, your time. We need your time and influence to do that we which we cannot; resolve this situation and end the Jungle.

Your ticket for the: Tessa Jowell visits the Jungle – including Help Refugees warehouse – calls media coverage of the camp an ‘insidious lie’