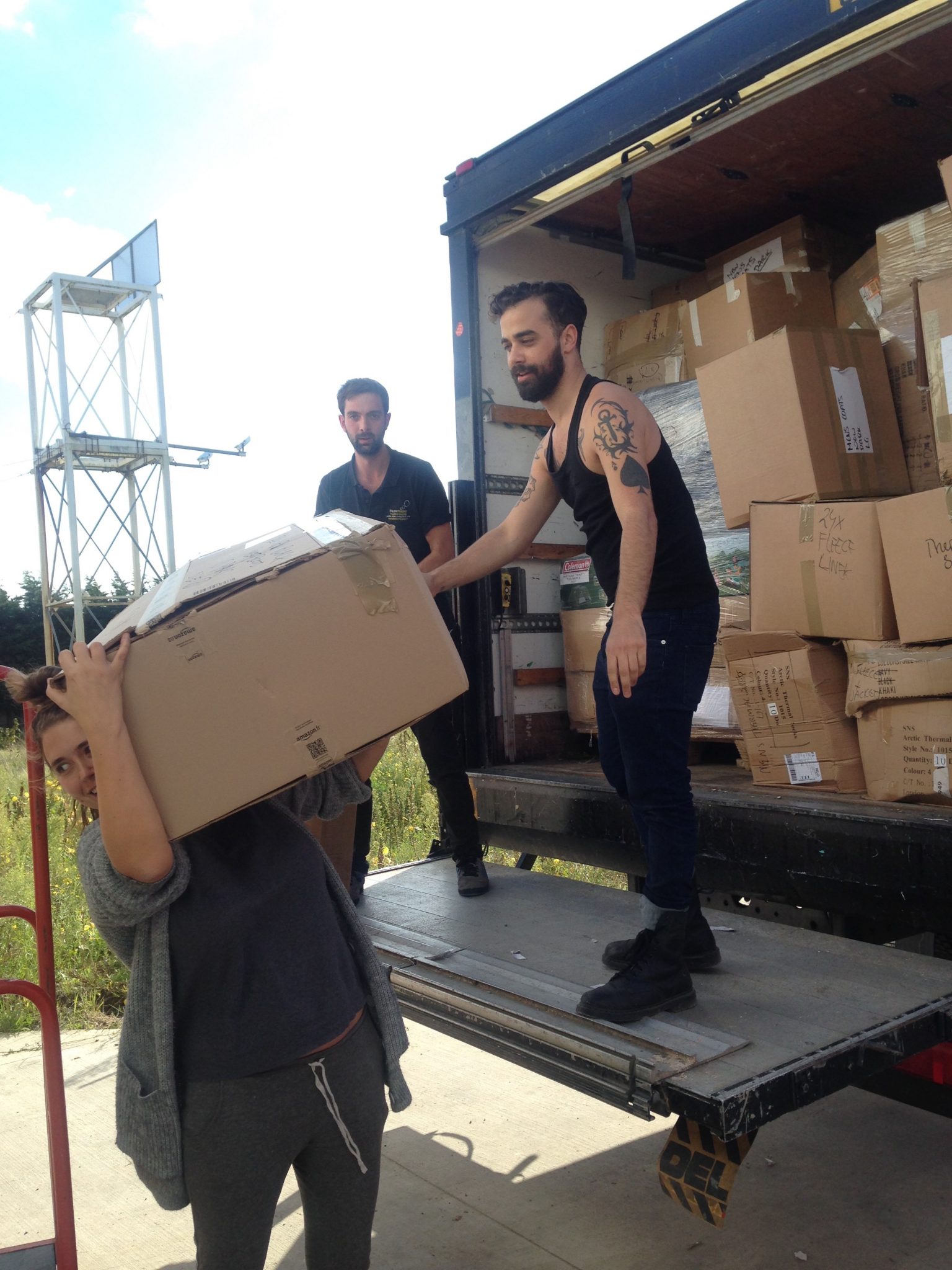 Team member Oz Katerji on his time in the Jungle, Calais 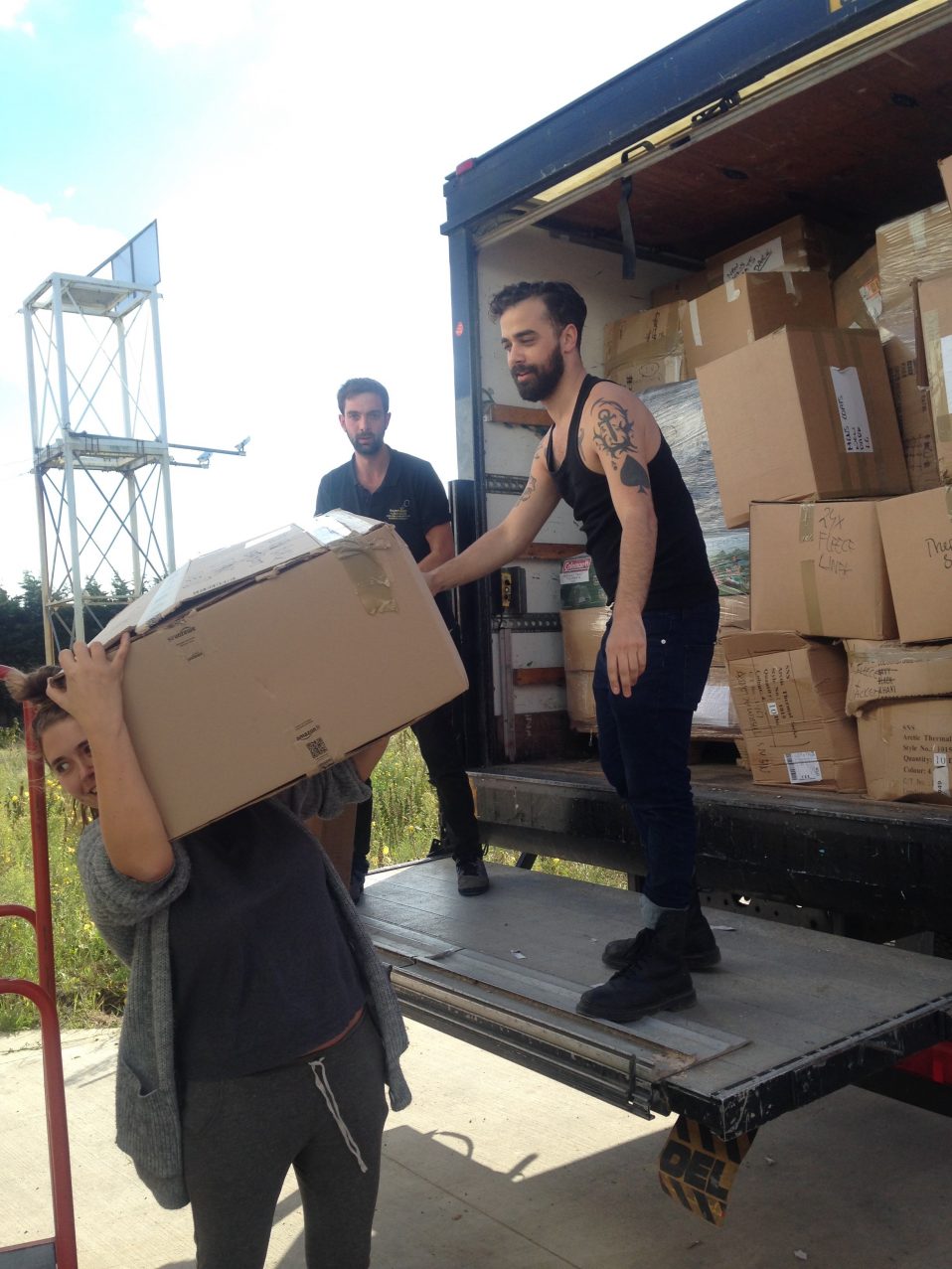 When first asked to write this blog I really struggled thinking about what narrative I could add to the situation unfolding in Calais that would be of benefit. So far the citizen response has been staggering. For all the anti-immigrant rhetoric thrown around in the British press a new poll published in the Guardian revealed that 31% of British people have donated to charities helping refugees in the month since three year-old Aylan Kurdi tragically washed up on the Turkish coast.

When I first decided to help I had heard of a small convoy of aid heading over to Calais from London and wanted to help out. In a matter of days that small convoy turned into a massive warehouse full of donations with thousands of parcels arriving every day and a stream of hundreds of volunteers heading back and forth across the channel to deliver aid to the Calais Jungle refugee camp. A warehouse space had to be rented in Calais to deal with all the donations alongside the fantastic local charity L’Auberge des Migrants. Soon too, that warehouse was overflowing with aid and volunteers arriving daily to help sort and distribute it.

My first time arriving at the Calais camp I felt completely shocked. This was not my first time in a refugee camp, I have been to at least a dozen since the start of the Syrian revolution, some in horrendously desperate conditions sprawling out as far as the eye can see. What shocked me was that this camp closer resembled a Central African slum than it did modern-day Western Europe. How could the French authorities allow the situation to deteriorate to this level? Quite frankly the conditions are inhumane, luckily there is running water and some power but the sanitation facilities are inadequate, the camp frequently floods and it is becoming increasingly overcrowded and polluted. No human should have to live in these conditions. What struck me most about the inhabitants of the camp was their determination, that no matter what was happening to them they would persevere. I undoubtedly witnessed some scenes of desperation and panic among some of the residents, but I also witnessed incredible kindness and humility.

Despite having absolutely nothing the vast majority of the residents I spoke to wanted to invite me for a tea or some food, the desire to share what little they had with people is remarkable. In fact, I would say the most hospitable people I have ever met in my life have been in refugee camps. It’s important to remember that these people don’t want handouts, all they want is their dignity and a chance to live.

The events that unfolded over the next few days were crucial to understanding why our help is so vitally needed to solving this crisis, both domestically and across Europe and the Middle East. Last Saturday a huge demonstration organised by L’Auberge des Migrants took place with a march from the Jungle camp towards the ferry port drew thousands of refugees, migrants, aid workers and solitary activists from across the EU.

It was incredible to see how far the march spread, from horizon to horizon, refugees and activists walking hand in hand in solidarity. The mood was both jovial and defiant, I could see the hope in many of the faces of the young migrants on the march, as if the authorities were watching and could hear their demands. The sad truth is nobody is listening, not in France and not in Britain.

Over the last few weeks more Syrians have started arriving in Calais, the Jungle mainly houses Iraqis, Afghanis, Eritreans and a host of refugees from other conflict and poverty-stricken nations. A group of about 300 Syrians had set up camp near the ferry terminal and did not want to reside in the jungle. Honestly it’s hard to blame them for that. I think many believed that their situation was temporary, the hope that having traveled so far that the last few miles to their family and friends in England would be the easiest and that their stay in Calais would be a short one.

I met this young Syrian man at the Syrian encampment, he helped us distribute sleeping bags and jackets to the young men that had just arrived, the vast majority of them had already escaped barrel bombings, sectarian death squads, treacherous seas and racist police to arrive this far. The young man helped keep his comrades calm and in line, many people who haven’t ever worked with refugees before don’t realise how difficult it is for people form an orderly queue in a situation as difficult as that. Fights and riots can break out easily, people when pushed to their limits can often snap. The man helped keep everyone calm and distribute things to those most in need. Despite the fact that he clearly needed a warmer jacket he kept nothing for himself, handing everything that was given to him to those most in need. Afterwards he took me to one side and asked me what was happening in the UK and when they were going to open the borders for them. After I explained to him that the British government wasn’t going to do that he looked visibly distraught. He paused for a moment and then smiled defiantly, “I will see you in London” he said.

Three days prior to this, his group had tried to jump onto the euro tunnel tracks and one man was killed instantly as he touched one of the high voltage wires, they had seen the smoke rising from his body. After everything these people have been through to get this far, no matter how dangerous those last few miles get, no cage in the world will stop them from trying. History will not remember the actions of our leaders kindly. Days later, I saw this man again, in a photo of him cowering and crying as French police broke up the camp violently. They tear gassed and beat the residents, tore down their tents and frog-marched them to the jungle, most of them had to leave all their possessions behind. It is not acceptable to treat human beings like this, the French authorities should be truly ashamed of themselves. The police continued to strip parts of the camp over the course of the day and riots inevitably broke out. The situation is, frankly speaking, disgraceful. While the citizen response has been incredible, our respective governments have acted appallingly.

However our citizen response is also not without fault. Over the course of the few days I spent in Calais, many groups turned up to distribute goods. Some of those people turned up in cars packed full of unsorted clothing, opened their doors and triggered riots in the camp. Some of the people that turned up were poverty tourists, treating the camp like it was some sort of human safari. One of the vans that turned up ran over a tent injuring two people inside before driving off oblivious to the damage they had caused. Boxes on boxes of useless items still arrive on a daily basis to the warehouses across Calais.

I implore those reading this post, we do urgently need your help, but don’t just load up a van full of things and drive down to Calais. The amount of man-power needed to sort through donations is preventing us from delivering aid to people, inexperience in dealing with these sorts of situations is leading people to causing more trouble than good. Piles and piles of soaking abandoned clothing are appearing up and down the highway where people have failed to donate appropriate items to those most in need. If you want to help, please, donate your time or your money. L’Auberge des Migrants are trying to raise enough money to build more permanent shelters for these people, instead of spending money on a new tent, that £100 would be much better served by building an accommodation unit. Hundreds of thousands of pounds have been donated to various little groups across the country, if we really want to help we need to start pooling this money together and working towards a united goal.

Please, don’t just turn up in Calais, get in touch with the people on the ground and arrange something that way. Warehouses in the UK still need help too, on top of that lobbying MPs and domestic activism will go a long way to helping find permanent housing for those currently stranded across the channel. I will leave you now with the words of one of the refugees who addressed the crowd at last weekend’s protest, because quite honestly the most important thing in this situation is to listen to the voices of those we are trying to help: “I speak for all of my neighbours living in the jungle when I say that we did not choose to leave our countries and make the dangerous journey here by choice. I and all the other migrants here would love to stay in our countries but we have been forced to leave.” Remember, these people are human beings and they deserve to be treated with dignity and respect, the only way we can do that is by working together.

Your ticket for the: Team member Oz Katerji on his time in the Jungle, Calais

Team member Oz Katerji on his time in the Jungle, Calais