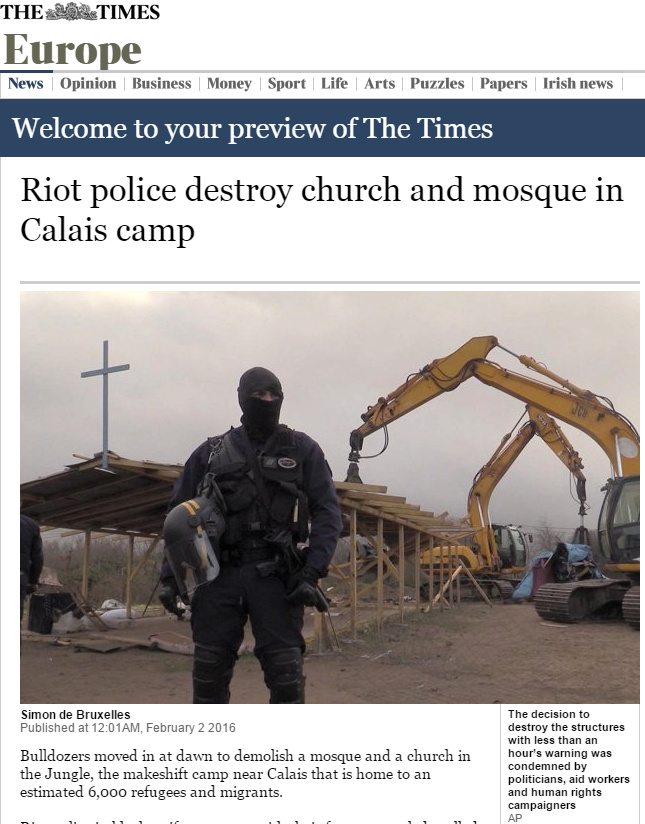 One of Help Refugees UK managers Tanya was quoted in this article from the Times about yesterday’s demolition of the mosque and church in the Calais camp.

Bulldozers moved in at dawn to demolish a mosque and a church in the Jungle, the makeshift camp near Calais that is home to an estimated 6,000 refugees and migrants.

Riot police in black uniforms, some with their faces concealed, pulled down the flimsy wooden shelters. The ground was then cleared, leaving nothing but mud. The pastor clung to his church’s blue wooden cross as the demolition men moved in.

The decision to destroy the structures with less than an hour’s warning was condemned by politicians, aid workers and human rights campaigners. The wooden church, which was built last October, was used by up to 200 Christian worshippers, mainly from Ethiopia and Eritrea. The compound it was housed in was also home to ten single Eritrean women who were hastily evacuated by volunteers.

Tanya Freedman, of the charity Help Refugees, said: “The compound also held the communal kitchen, which cooked daily for many.”

The church and the mosque were in a zone that has largely been cleared by the French authorities to create a buffer between the camp and the main road. Aid workers said that the local prefecture had given assurances that both buildings would be allowed to remain.

The move was condemned as sacrilege by the British Green Party MEP Molly Scott Cato, who visited the Calais camp on Saturday. She said that the migrants’ human right to worship had been infringed, saying: “This adds insult to injury for desperate people who need such spaces to find support and solace at a deeply distressing time.”

Your ticket for the: Tanya quoted in the Times piece on Calais camp mosque and church demolition