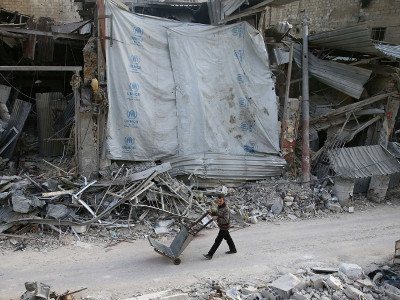 The relentless suffering of Syrian civilians has reached a devastating anniversary. Today, the conflict – which shows no signs of abating – enters its eighth year.

Half a million people have been killed, though the United Nations has long stopped counting. More than half of Syria’s pre-war population has been displaced, both internally and across borders. And there have been no limits to the brutal crimes committed during the course of the war: the regime has employed chemical weapons countless times; bombarded civilians and medical facilities; and tortured thousands of people to death, behind the menacing walls of the regime’s prisons. Cries of ‘no more’ and ‘never again’ are made hollow by the international community’s failure to protect civilians, and the ceaseless destruction that is waged by a regime with apparent impunity.

(“the people want the fall of the regime”) were heard from Tunisia to Yemen, Egypt to Libya – and by the time that peaceful demonstrations began in Syria, the authoritarian presidents in Tunisia and Egypt had been toppled. A group of children in Deraa, some as young as ten, sprayed graffiti in support of the Arab Spring: “your turn, Doctor [Assad],” it read.

The regime responded with brutal violence and inhumane treatment: the boys were arrested, detained and tortured. But while they were held, protests were stirring outside. Their act of teenage rebellion has become the origin myth for the peaceful uprisings that then spread across the country – and which were then met with indiscriminate regime violence. In the ensuing conflict, now one of international dimensions and huge geostrategic importance, the Assad regime has shown that there are no limits to the monstrosities that it will commit in order to retain power.

War crimes and the devastation of a country

Over the past seven years, every major principle of international law has been violated in Syria. Multiple parties to the conflict have conducted attacks leading to multiple civilian deaths, perpetrated sexual violence, and deliberately blocked humanitarian aid. However, “the Syrian government has far greater military capacity to inflict suffering on civilians and bears a greater burden of responsibility for war crimes and crimes against humanity.” It has systematically waged war against its own people: it is responsible for the majority of deaths in the conflict, and has committed mass atrocities against civilians.

The country’s infrastructure has been destroyed, leaving millions food insecure and without access to basic services. Seven out of every ten Syrians – 13 million people – now live in extreme poverty, and are in need of humanitarian aid. Some 6.5 million people are food insecure; another four million are at risk of being so. More than half of the country’s public hospitals and healthcare centres are closed or only partially functioning, and more than 11.3 million people are in need of health assistance. Critical medical supplies have been repeatedly removed from aid convoys to besieged locations: most recently, more than 70% of the health supplies intended to reach East Ghouta were removed by authorities.

The war in Syria has paralyzed the international system. The United Nations’ Security Council has been repeatedly deadlocked by Russia and China’s protection of the Assad regime. A chemical weapons investigation was prevented by Russia’s use of the veto – which they have used eleven times since the conflict began. Multiple peace talks and ceasefires have collapsed. Diplomatic consensus, on the rare occasions that it can be achieved, cannot and has not been implemented by the Security Council: the most recent ceasefire, unanimously agreed to halt the bombardment of Eastern Ghouta, was shattered within hours.

The involvement of international actors, both states and non-state groups, has created a conflict of huge geostrategic importance. It has resulted in the reconfiguration of regional relations: Russia is now positioned as the arbiter of power and protection within Syria, while Iran’s backing of the regime has contributed to the development of opposing international coalitions. Western powers – and, in fact, the international system – have been pushed aside by Russia’s activity inside Syria, its overtures to other states, and its ability to bypass UN negotiations. This has become a global conflict, borne out on the backs of Syrian civilians.

The past seven years – of brutal violence, of unprecedented and repeated war crimes – have created a humanitarian crisis of monumental proportions. This, in turn, has been compounded by the failures of both the international system and the international community.

Neighbouring countries that are host to millions of Syrians have been left without the support of wealthier nations, who have instead closed their borders and their eyes to the ongoing suffering of refugees – Syrians and others – around the world.

There is no indication that peace and justice will be granted to Syrians in the near future. From Afrin to Eastern Ghouta, the hellish conflict continues. But so do the courageous and selfless acts of Syrian civil society, including grassroots groups of first-responders, medics and rights defenders. Their heroism and resilience have saved thousands of lives, and inspired countless others.

Our collective voice, and our ability to act, must not be quashed by the ongoing depravity that we are witnessing. We must instead amplify and support the work of those inside Syria: the ordinary individuals, who have been propelled to do extraordinary work in face of indescribable danger and suffering. On this day, as ever, we stand in solidarity with them and their wish for a peaceful Syria.

Your ticket for the: A devastating anniversary: Syria enters eighth year of conflict