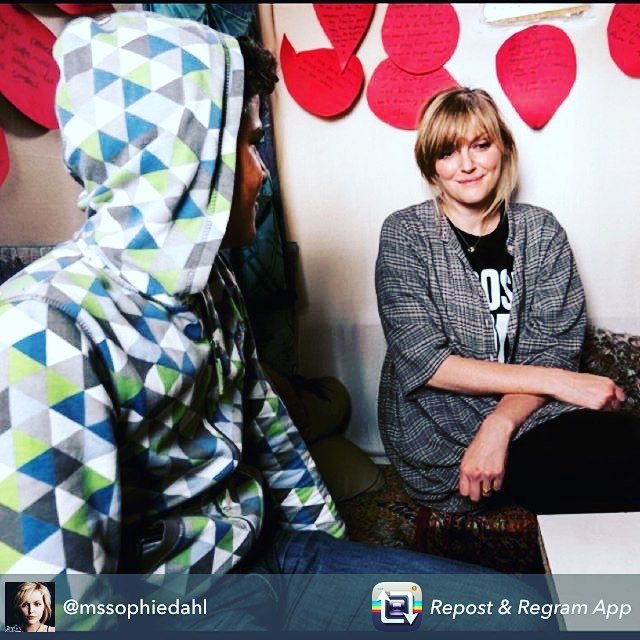 We are grateful that Sophie Dahl took the time to come to Calais with Help Refugees and meet some of the camp residents, including a young unaccompanied minor who Sophie has been paired with in our ‘Buddy Programme’, and to see some of the work that Help Refugees are doing in the camp.

Sophie has shared, in her own words, some of her thoughts on the day:

On Wednesday I visited the refugee camp in Calais with the very wonderful Help Refugees. I came away humbled and in awe of the people living there in exceptionally challenging circumstances. I was also staggered by the total absence of officials; all the onus is on a small handful of incredible NGOs and volunteers.There are over 5000 people in the camp, and there are under 100 volunteers on a daily basis trying to meet the needs of those 5000 people.

These refugees have fled horrific violence and persecution; made unimaginable journeys to get to safety, and yet because of government inaction and denial, they are living in circumstances where their basic human rights are not being met. There are many, many unaccompanied children and adolescents in Calais. The majority of them qualify for asylum in the UK, where they have existing family members. According to census reports conducted by NGOs there are around 420 unaccompanied refugee children still in Calais. Many of them have witnessed the death of close family members, due to war, or when making the perilous journey to escape the war. They are traumatised and desperately need protection and support. They are vulnerable to traffickers and every kind of abuse. There are no designated safe places for the children to sleep, and I saw no evidence that the authorities had provided a place to sleep that was for unaccompanied children, or put adequate child protection procedures in place. Six children froze to death in the camp in Calais this winter.

In Calais I met Hassan (not his real name) a teenager who wants nothing more than to be reunited with his brother and sister in England. To get on with his life, study, and play football. He has been in the camp for eight months, waiting. He is sleeping in Calais alone in a tent. An unaccompanied minor with a legal right to seek asylum and join his siblings in the UK.

Who is making him and all those like him wait indefinitely? There is a humanitarian crisis in full flow on our doorstep in Europe, and no-one is being held to account. Nearly 90% of the world’s refugees are hosted in developing countries. There are immediate practical measures that could be put in place by French and British governments, ensuring the safe and expedited asylum of unaccompanied children, and providing adequate sanitation and warm living spaces for those in limbo in refugee camps.

I was bowled over by the bravery and grace that I encountered in Calais, again and again.

Please join me in advocating for kids like Hassan, pictured above, for the families struggling daily, the men who have been separated from their wives and children. People who need all the help and compassion we can give. In Europe. Many have gone missing. Proper sanitation and shelter is needed, aid is still needed, volunteers too. But most of all, we need to mobilise, show our humanity and lobby decision makers to take action now.

Your ticket for the: Sophie Dahl meets young refugees in Calais