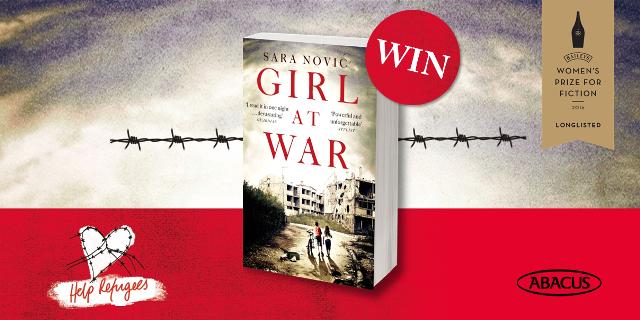 Sara Nović’s debut novel, Girl at War, tells the story of ten-year-old Ana Jurić: carefree tomboy, best friend, protective sister and doting daughter – and all at once lost to a world of genocide and child soldiers in the brutality of the Bosnian-Croat conflict. The paperback publication of Nović’s novel is particularly pertinent at this time as the current Syrian refugee crisis worsens.

Here, Sara Nović discusses her poignant novel in light of these recent events, and why we must not forget our place in it all.

Recently an interviewer asked me whether I was surprised by how timely my novel has become given the current Syrian refugee crisis. It is a complicated question. The short answer is that I am heartbroken, but I’m unfortunately not surprised. Yugoslavian refugees were not the first to find themselves in the position of needing to flee their country en masse, nor were they last.

Part of me is wary of the question, too—the Syrian crisis is not the ex-Yugo one; in fact, in many ways we in the West are much more directly responsible for it. And it is only in understanding the intricacies of this specific situation can we even begin to hope of righting it. This makes the work of groups like Help Refugees of great importance: beyond meeting people’s immediate needs, when workers are on the ground with the people, they can see refugees not as a massive number but as individuals, and through that gain a better understanding of the situation beyond surface level media coverage.

I have often wondered what captures the public’s imagination in one tragedy versus another. When the war broke out in Croatia, particularly after the massacres in Vukovar, people thought Europe was sure to come to our aid. The country’s biggest stars cried out for intervention in pop songs like “Stop the War in Croatia,” complete with saccharine children’s choir, in which the pre-chorus unsubtly pled, “we want to share the European dream. We want democracy and peace. Let Croatia be one of Europe’s stars; Europe you can stop the war.” But intervention didn’t come, at least not in the active military sense. Later, in more cynical moments, when my friends and I tried to parse out why, we’d conject whether NATO had intervened in Bosnia because Sarajevo was a place of which Westerners had heard—the Olympics had been there in 1984. And while I know political and military decisions are undoubtedly more complicated than that, it’s true that as civilians our attentions can be easily turned by arbitrary factors. We must not let the limits of our empathy be so narrow that we care only for human life when it looks exactly like our lives.

This is part of the reason why I wrote Girl at War, to give voice to a history that had been so ignored by the mainstream narrative, to give intimacy to the vague news story images that did make their way to the West. Because for those who live through it, war is intimate, seeping into every crack and crevice of daily life; it is omnipresent, and it is specific.

Intervention is a tricky business, morally, ethically and practically: on the one hand, the flared tensions surrounding the sentencing of Radovan Karadžić at The Hague last week highlights the inefficacy of the “split the baby” governance solution stipulated for Bosnia by the West in the Dayton Accords. On the other, one wonders if an earlier NATO presence could’ve prevented a massacre like the one at Srebrenica altogether.

America and its allies’ occupation of Afghanistan and Iraq led to the formation of ISIL; conversely, war crimes by the Yugoslavian government and long-term isolation brought on by delayed intervention in Bosnia also rendered an uptick in radicalization amongst a previously extremely secular Muslim population.

I certainly don’t pretend to have the answers to the current situation, but I do know that in times like these, the value of the work of NGOs like Help Refugees as social tourniquets cannot be understated. The absence of major aid agencies at the frontline of this crisis is palpable, and the need for volunteer-led, grassroots organisations like Help Refugees to step in to meet the practical as well as emotional needs of the refugees – both adults and children – is real.  Just a small part of what Help Refugees does includes building shelters, assisting medics and sending aid where it’s most needed, including Greece, Calais, Macedonia and Serbia. This work is intrinsic to the cause, but we the general public must also consider where we fit into the solution ourselves—we cannot hold our collective responsibility for human life at bay indefinitely.

You can donate to Help Refugees here.

Girl at War by Sara Nović is out now in paperback. Enter here for the chance to win 1 of 12 copies of the book.

Your ticket for the: Sara Nović discusses Girl at War