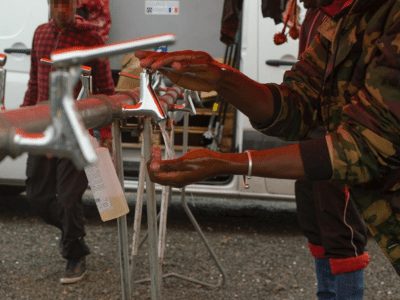 Since last year’s demolition of the infamous Calais “Jungle”, the living conditions of refugees in the area have deteriorated considerably. Last month, Ella Foggitt – a water, sanitation and hygiene (WASH) expert – travelled to Northern France with Help Refugees, and conducted an assessment of the area. She found that WASH provisions in Calais are “inadequate”, and in Grande-Synthe, they are “severely lacking and extremely unsatisfactory.”

There are currently 700-800 refugees in Calais, 300-500 refugees in Grande Synthe, and hundreds more in other small camps in the region. People are dispersed on a daily basis, as refugees can no longer settle in the area: the French authorities are trying to prevent a “fixation point” in Calais. Among them are nearly 200 unaccompanied child refugees, the youngest of them being only 9 years old.

In June, Help Refugees and other organisations took the French authorities to court regarding the lack of sanitation facilities. The case was heard in France’s highest administrative court, the Conseil d’Etat, and found that state inactivity had resulted in the denial of refugees’ fundamental rights. The court upheld that authorities had the legal obligation to provide adequate sanitation provision, and stated that improvements must include sufficient access to toilets, drinking water and washing facilities.

While the court order has resulted in some improvements, current provisions in Calais contravene the minimum standards set by The Sphere Project. In October, the UN’s Special Rapporteur on access to water “urged the Government of France to devise long-term measures to provide access to safe drinking water and sanitation for migrants in Calais and other areas along the northern French coast.”

Foggit’s report found that the situation in Calais was sub-standard across all measures, including water supply, bathing facilities, and menstrual hygiene provisions. Furthermore, it noted the unlawfully high ratio of people to toilets. Where it exists, solid waste management remains inadequate; as a result, there is a significant issue with disease vectors, including rats.

In Grande-Synthe, the situation was found to be worse. Hundreds of refugees share just six toilets, which are accessible only for specific hours during the day. Just one skip is used to collect the solid waste produced by 400-500 people. As a result, open defecation is commonplace: given the lack of hand washing facilities, this creates severe risks of infection.

The scheduled and limited hours of water provision exacerbate existing hygiene issues. The water trucks are often not present during food distribution, for example, which prevents refugees from handwashing before and after eating.

A greater number of refugees in Grande-Synthe were observed to have large water containers. While this should improve access to clean water, numerous refugees reported that police sprayed chemicals directly in to the vessels. This renders them unusable, and directly violates refugees’ human right to clean and safe water.

Furthermore, the report notes that “medical professionals treating refugees in Calais and Dunkirk reported that WASH-related issues are common. Conditions cited include trench foot, diarrhoea and skin infections such as scabies.” Infections often follow, as their living conditions mean that refugees are unable to keep injuries clean and dry.

The report concluded by saying that:

“Despite the poor living conditions, there is no sign of the number of refugees living in Calais and Grande-Synthe decreasing significantly in the near future…With winter approaching, rainwater is likely to exacerbate the issues relating to open defecation, standing water and poor drainage. Therefore, the French state needs to act to improve the conditions immediately and do so in a sustainable manner.”

The sanitation crisis in Northern France is urgent, and requires immediate address by the French state. Help Refugees continues to do all that we can to improve the situation, from distributing thousands of hygiene products to providing clean bedding to prevent skin infections. But with winter approach, needs are only increasing – and our funds are stretched. Please, if you are able to donate, do so here. Thank you.

For a copy of the report, please email amelia@helprefugees.org.

Your ticket for the: Sanitation conditions in Northern France found to be “severely lacking and extremely unsatisfactory”