“We just need to be safe and free,” says 17-year-old Sammy in Calais 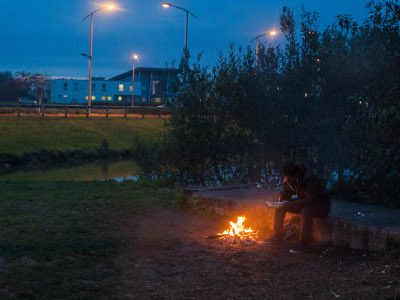 Follow Sammy’s story from being the son of an opposition party member in Ethiopia, being traded between the hands of gangs in Libya, to living in limbo in Calais.

Sitting in the waiting room at La PASS, the small clinic for destitute persons in Calais, several people are speaking at once. One man tells the story of his life in Ethiopia, recounting daily routines and ways of living; his friend chiming in occasionally with extra details. Two men pace up and down the lino-paved corridor. They are waiting the eternity that everyone at the doctors seems to experience: they nod to new arrivals as they enter, occasionally murmuring greetings in their mother tongue.

This morning, there is an abundance of energy in the room. Two unexpected buses arrived at the large distribution point, out of the blue around 9 am surprising associations and refugees alike. Thus there are many rumours and much confusion, anticipation and excitement.

All of these will soon turn to frustration as once again there is not enough information to go round. One unaccompanied minor sits down next to me, anxiously trying to extract information that I simply do not have, asking me to call his cousin and explain what is going on.

In the midst of all this, between summons by the nurse and the general hubbub of the room, Sammy sits next to me, talking to me about his life. As he speaks, I ask him if it’s okay note it down, to let other people hear what he has to say. He nods enthusiastically, and starts from the beginning.

“My name is Sammy and I came from Ethiopia and I’m an Oromo refugee, suffering from mass crackdown of the government. They have killed my parents in the past, when I was a teenager,and I’ve been raised by my uncle. I decided to leave my country because I was threatened by the government, because my parents were opposition-party supporters and my father was a soldier of [the] opposition [group] called OLF. That’s why I decided to save my life and I rushed to Sudan.

I went to Libya to make [the] journey through to Europe. I sustained multiple accounts of civil[ian] beating; You can call it slavery. I’ve been taken hostage to one gangster’s group and I worked for them for free and they treat[ed] me really bad. They beat me almost every day and night, whenever I did something wrong.

And then finally I make it by boat through to Europe. I’ve been rescued by [a] rescue team from the ocean. I arrived in Italy, in the port of Lampedusa, then we were taken to the shelter. We stayed multiple days there, then they threatened us to make fingerprints. However, my destination, my favourite destination to seek asylum was [the] United Kingdom, actually England. But I was stuck there and they took my fingerprint, and they kicked me out of the house after [several] days. I was just sixteen years [old] and now I’m here in France.”

He smiles at my surprise when he reveals that he is only seventeen. He tells me how much younger he looked when he first left Ethiopia, at just twelve years old. But it’s not only his appearance that masks his true age. Whilst we wait, he discusses the political and economic options for Oromia to declare itself an independent state. He talks at length about federalism, the complexities of Ethiopia’s promise to release political prisoners, and the importance of education. “My dream is to be a civil engineer”, he tells me. He ruffles his hair and laughs as we discuss things that he wants to do in his life. “I like the royal family”, he chuckles. “I want to shake hands with the Queen, in Buckingham Palace.” But the realities of his situation are not lost on him.

“I came to Calais multiple times. The cold is really severe. At midnight, the temperature is getting below zero degrees. We sleep rough, in the shelter. It will be raining and the drainage is leaking. We just feel the terrible cold and there are days where I’ve felt like I’m going to die, because all my blood will stop, frozen. I’m just calling on the government to treat us better.

The police brutality is way too tough too. The police are kicking us, pepper-sprayed on our eyes, while we are gathering for food, and they just kick us out. Sometimes, they [the government] gives us a shelter and in the morning, we’ll leave and we’ve got no shower. We are suffering from massive hygienic problems, like bleeding teeth and wounds between our thighs. We are suffering here.”

We look at each other, knowing neither of us has the solution within our grasp. He continues,

“We are just calling on an organisation which can help us to get us to the UK or settle down in France, wherever. We just need to be safe and free, so we can get education and see our future not like a ‘lost generation’, but [with] an optimistic future. This is what I’m saying, this is my opinion. I’m calling on the government to help us. We are just teenagers suffering. [We] lost our parents at a young age, and we are here to just suffer? We are not criminals, we’re just seeking asylum.”

Short and to the point. Sammy’s request, like many others in Calais, is clear:

We’re human. We exist. Do not let us be forgotten.

This piece was written by Charlotte Head, long term-volunteer in Calais, and first published on The Warehouse – Calais. Help Refugees has worked in Northern France since 2015, providing everything from hot food to psychosocial support to the transitory refugee population. To help us help people like Sammy, please donate here. Thank you.

All photos in this article are by Futuro Berg.

Your ticket for the: “We just need to be safe and free,” says 17-year-old Sammy in Calais

“We just need to be safe and free,” says 17-year-old Sammy in Calais