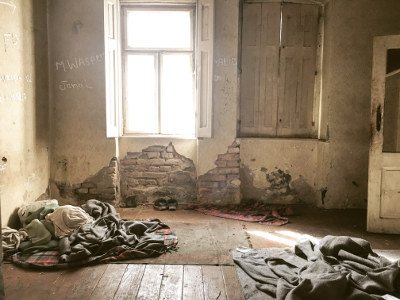 A new report by Medecins Sans Frontières (MSF) has found that refugees, including unaccompanied minors, have been repeatedly assaulted by border officials and state authorities along the Balkan route.

“Instead of fair and protection sensitive border procedures, asylum seekers and other vulnerable migrants are pushed back, robbed, beaten, humiliated and attacked by dogs,” as they attempt to cross Balkan borders, the report states.

Despite the EU-Turkey deal and the alleged closure of the so-called Balkan Road, thousands of refugees continue to use it as an overland route to Europe. Serbia remains one of the main hubs for arrivals: in October alone, 1017 new arrivals were recorded by UNHCR, which is almost double the number of observed arrivals for the previous month. Of the new arrivals, 69 were unaccompanied or separated children – compared to just 28 the month before.

MSF’s report, which covered the first six months of this year, noted that the vast majority of mental health patients under 18 suffered from intentional violence during their passage through the Balkans. 76% of the injured said that state authorities were the perpetrators, of which the majority (92%) were border forces.

Injuries included severe beatings, cuts from razor blades or knives, and dog bites. Many had also experienced sensory deprivation, or food and water deprivation – both of which can be classed as torture. The youngest patient treated was just 12 years old.

Abuse, however, is not restricted to the borders. It has also been documented in camps, police stations, and detention centers along the route.

Confinement becomes a reality for “almost all”, as Balkan states rely on administrative detention to control the asylum seekers passing through their states. In Hungary, for example, asylum seekers – including unaccompanied children aged over 14 – are detained in “Transit Zones” at the border with Serbia. In such spaces, even heavily pregnant women have to be handcuffed to visit the medical clinic inside the facility.

The report highlighted the state authorities in Bulgaria, Hungary and Croatia as particularly abusive. They have repeatedly engaged in unlawful pushback practices and collective expulsions, in obvious contravention of international law. Furthermore, the report notes that “seemingly blind-folded administrators continue to enforce Dublin returns, even when they increase the risk for vulnerable individuals.”

In Serbia, camps – while basic – provide a sense of physical safety to refugees living in them. Furthermore, the government has made significant and laudable efforts to integrate child refugees in to primary schools. Yet the country is yet to introduce an effective process through which asylum seekers can apply for refugee status. Out of more than 1,000 asylum applications launched in 2016, only 70 were decided upon. Over half of those were rejected.

“The system is not efficient enough to process all the asylum requests it gets,” said Mirjana Milenkovski of UNHCR, which has condemned the asylum procedure in Serbia as “unsafe”.

Help Refugees funds four projects in Serbia, including BelgrAid. Our partners work with refugees living in the 18 state-managed facilities, as well as those living in squats and seeking to travel beyond Serbia. The hopelessness associated with the asylum procedure, and the absence of psycho-social support in state camps, continues to impel people to try and reach other European states – and pushes vulnerable communities in to the hands of smugglers.

BelgrAid has recently begun to support the refugee community passing through Subotica, near the Serbia-Hungary border. There are approximately 300 refugees there at any one time, including a considerable number of refugees between the ages of 12-16. Of particular concern are two boys of just six and seven years old.

Despite the claims of EU member states, the Balkan Route has not closed. It continues to be used by asylum seekers in their search for safety, who are then faced with violence, confinement and inadequate access to asylum procedures. While the systemic causes of these issues require legal and political reforms, urgent action is needed to support refugees – in Serbia and beyond.

The needs of the transient community in Subotica will only increase as the cold weather approaches.

The winter in Serbia is harsh: last year, temperatures reached -12 during the day, and -15 at night. The number of refugees living in squats is unlikely to decrease, and our teams on the ground need your help in order to provide bedding, warm clothing, and meet other crucial needs. Please, if you are able to help, donate here. Our work relies on the generosity of people like you.

Your ticket for the: Refugees face repeated violence from European authorities on the Balkan Route, MSF report finds