This letter was written by Mohammed Nabeel, who was captured and tortured by the Syrian Regime. He is currently living in a refugee camp in Greece with his wife and son. This post was originally published on our partner Refugee Support’s website.

I grew up in a Palestinian refugee camp in Syria, which was bombed. Missiles and mortar killed my friends and burnt my home.

I never wanted to leave Syria, but I had no choice. I was arrested and tortured by the Regime for six months. It felt like 60 years. They hung me for three hours each day in a 1×1 metre cell. I shared a cell with two other men; we had to sleep standing up because there wasn’t enough space. I thought I was dead. They accused me of being a rebel, but I had never fought in my life.

My shoulders cracked. I can’t even carry my child. When you enter interrogation, you are totally naked. People are dying and screaming in front of you. They hit me with electricity cables. But the most difficult part is the hanging. I was blindfolded and often lost consciousness.

When I finally came out of prison, I went home. But what I saw was incomprehensible. At each side of my town, militia were fighting each other with missiles. My wife was shot. Food was not available, and used as a weapon of war. My wife – Rania – was pregnant, but we lost our baby. 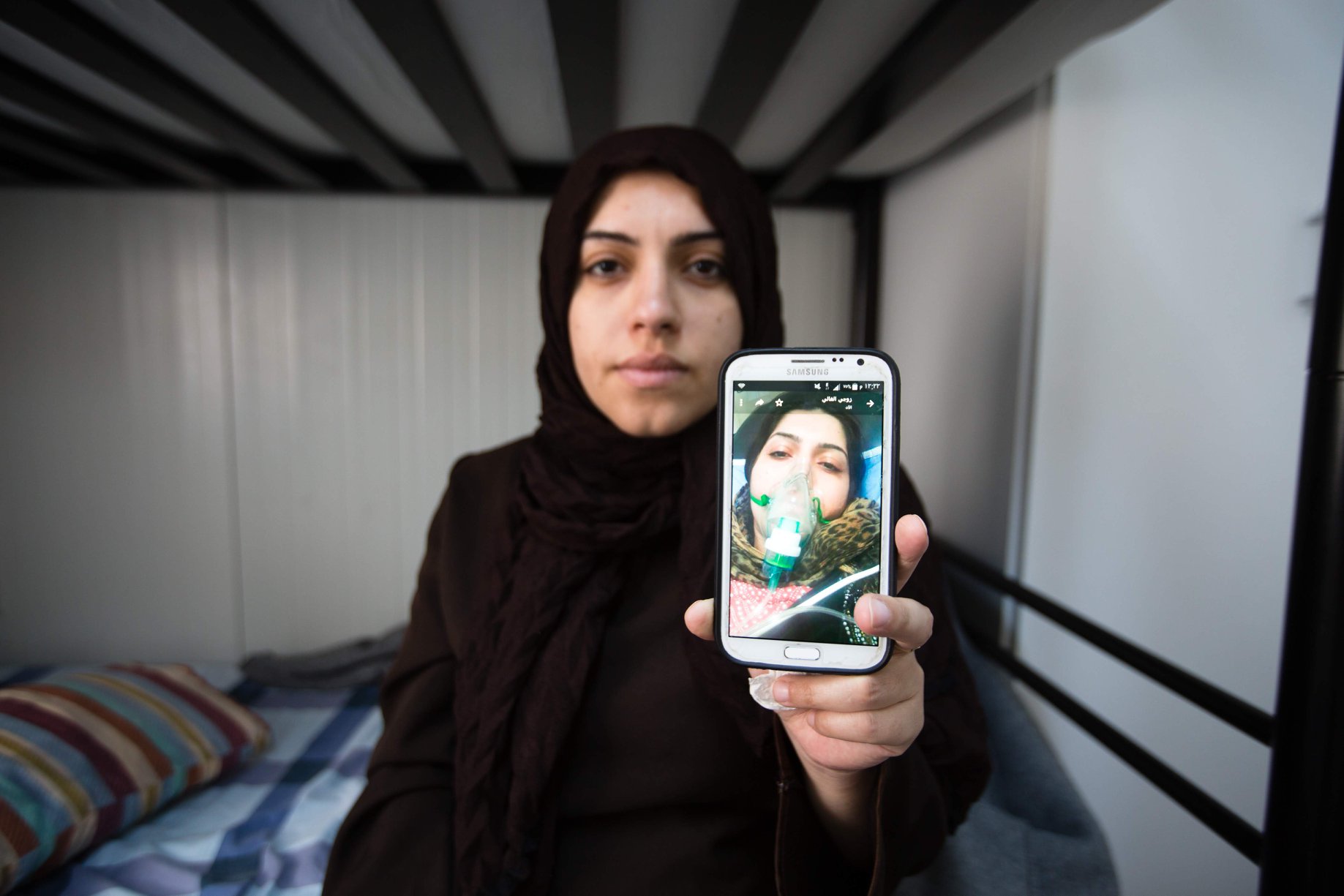 Mohammed’s wife, a successful wedding photographer in Syria, now lives in a container in a refugee camp in Greece. Photo: Celeste Hibbert

I had no choice but to leave. I carried my son the best I could, and my wife – who could barely walk because the bullet was still in her knee. We walked to Turkey, and eventually arrived in Greece. They call it ‘The Journey of Death.’

We had reached safety, but we were unprepared for what was to come.

After walking for two days, we were given a tent filled with rain. I had to use my only clothes to mop up the dirt. My son cried because it was so cold. Rats played inside the tent. My child didn’t understand why we had to leave. He developed a serious fever, but there was no ambulance and I had no money to transport him to the hospital. I walked for miles, and carried him on my cracked shoulders. Would we have been better off in Syria? 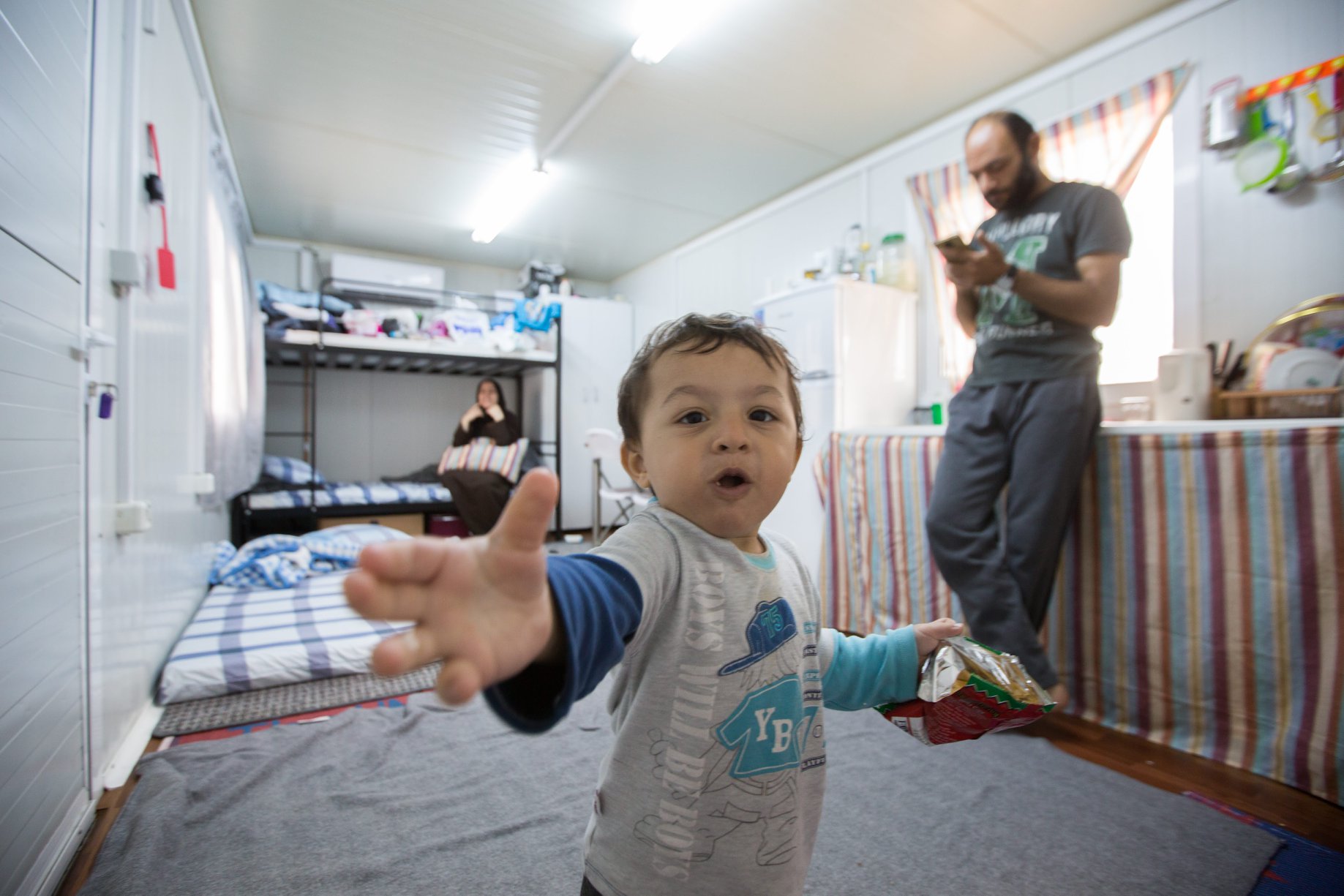 Mohammed with his wife and son in their container in refugee camp in Greece. Photo: Celeste Hibbert

My family now live in a container in a field. I am an engineer, and my wife is a successful wedding photographer, but we are not allowed to work. I don’t want to live on handouts, but we have no choice. We are at the mercy of government policies, and must wait until December 2019 for our next interview to claim asylum.

I feel so much shame, that I can’t provide for my wife and son. I am humiliated. We are stuck; a number in a system.

Even if I get residency in Greece, I have no passport, so I can’t visit my sister in Turkey or mother who is still trapped in Syria. There is also no work here. I don’t want anything from this life, I am not asking for money, housing or clothes. All I want is to secure a dignified life for my wife and son. I want to sweat, and work for their future. We are strong, we have survived pain only Syrians can understand. But, I need a new kind of strength: hope.

I miss my family. I haven’t seen them in three years. My brother is still imprisoned by the Regime, I pray he is alive. Why is it my sin, that I was born in Syria? Born as a Palestinian with no rights, no identity?

In the name of my family, I appeal to anyone who will listen. Is it not our right to sleep on a bed? Buy our own food? Protect our children from falling bullets?

Who knows. I sit in my container, waiting…and waiting. Trapped. Helpless.

It is not our right to live too?

Your ticket for the: Refugee Stories: Mohammed Nabeel