Deaths at the Calais Border: Needless, Relentless and Entirely Preventable 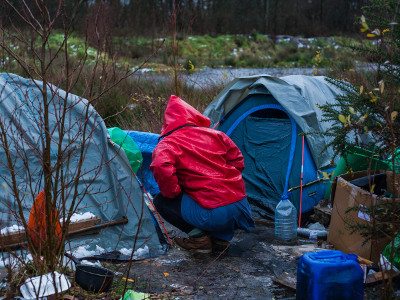 Annie Gavrilescu, Help Refugees’ Regional Manager for Northern France, wrote the following article that was originally published on HuffPost UK. Her heartbreaking description of refugees’ lives in Calais is a call to action unlike any other.

We were consistently warned that refugees dying of the cold in Northern France was a “distinct possibility”. No one really took into account how refugees themselves had the same fear.

When the only hope to cling on to is the sheer desperate thought of getting out of Calais – refugees are taking more risks, putting their lives in danger. All in the last two weeks, three tragedies brought the humanitarian response in Calais to a standstill. A 15-year-old child died on the motorway trying to reach his family in the UK. He had been formally referred to the state child protection service as a vulnerable child and a potential candidate for family reunification, but no action was taken. A 22-year-old young man was almost fatally injured in similar circumstances. And a few nights ago another young man was killed inside a lorry which was involved in a crash.

The conditions in which people live are beyond bleak. The same story repeats itself each day and night. You’ve been forced out of your home, your town and your country. You survived the perilous sea while many other have died. You reach Europe and try to join your family in Britain. The old “Jungle” camp is gone.

You wake up in the forest on the frozen ground, underneath a tarp being ripped apart by the police. The night before, the Prefecture in Calais said it wasn’t cold enough to open the warehouse they use for emergency night accommodation. The police tell you to move on and before you have the chance, you’re sprayed with tear gas.

Your eyes sting, your skin feels like it’s burning and you struggle to breathe, you still walk two miles in broken shoes to a distribution point to get the only food available to you which is provided by volunteers. You stand in line waiting for a warmer jacket and maybe some shoes, but defeated volunteers tell you they don’t have enough donations to give you what you need. You try to connect to the WiFi provided by volunteers and ask for a top-up on a Facebook group, knowing it could take you a month before you have credit on your phone to call your family. When you do speak to your mum, you lie to her and tell her you’re somewhere warm and safe. 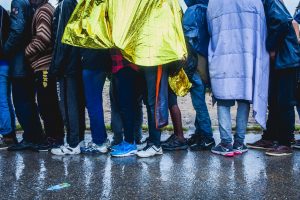 You walk another two miles to a day centre outside of town to lay down somewhere dry and charge your phone. You’re told if you want to stay in France you have to get yourself to Lille, as there is no asylum office in Calais. But you also know the police arrest all refugees at train stations, and you cannot face the detention centre again. The day centre closes in the afternoon, you walk out and it’s already dark again. You wait again for volunteers to come with food. When the night comes you walk back to your bit of forest and find that everything you left behind was taken or covered in mud.

You go up to the motorway, wait for any lorry to slow down as it passes you. You cannot afford the smugglers who take you to better locations, you tried but they’ve tricked and beaten you before and you’re too afraid to risk it. One lorry comes and slows down next to you. It stops in a traffic jam, you hurry to unlock the door. Normally you have no luck and return to the woods and try to settle somewhere to sleep, before it all repeats itself once more.

Tonight however, you climb in between the heavy pallets and you say goodbye to your friend who locks the door behind you. You sit in silence and hope you’ll finally never have to see Calais again. You’ll be able to speak to your mum back in Nangarhar and tell her you’re finally safe. No more hiding in forests, no more police taking away your only blanket, no more waiting.

Two deaths in the last week have happened like this. The 15-year-old boy was hit by a vehicle that didn’t stop and was found dead by the side of the road the next morning. Volunteers are now gathering the funds to repatriate his body. The 22-year-old is described as being “between life and death”. The young man who died last night, crushed inside a lorry has not yet been identified.

Macron declared in July that no refugees – man, woman or child – would face the winter on the streets or in the woods, and yet this is the reality faced by so many right now. The emergency accommodation in Calais has once again closed its doors tonight

In Northern France, volunteers are still feeding, clothing, informing and protecting refugees, the grassroots volunteer response is the only thing keeping them alive. But there is nothing we can do when refugees become so desperate, they risk their lives so much more, purely out of the fear of dying of the cold.

Help Refugees and our local French partners provide clothing, bedding and hygiene items, and advocate for refugees’ rights. Refugee Community Kitchen is the only source of food for refugees in Northern France. Refugee Info Bus provides WiFi and asylum information.

All photos by Futuro Berg, for Help Refugees.

Your ticket for the: Deaths at the Calais Border: Needless, Relentless and Entirely Preventable

Deaths at the Calais Border: Needless, Relentless and Entirely Preventable