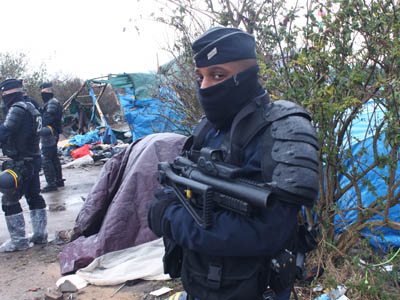 The report has found that there was an “abusive use of tear gas” in Calais. It noted that numerous testimonies related incidences in which gas was used in obvious contradiction to regulations regarding the use of force.

Furthermore, it found that the police deployed a “disproportionate, even unjustified, use of force” in a number of [on-the-spot] situations – against both refugees and volunteers. It notes that the consistency among witness testimonies, regarding physical abuses, represented a questioning of police conduct that would be “difficult to ignore”.

The investigation was requested by the Interior Ministry, following a report by Human Rights Watch in July – which was itself prompted by initial findings by Help Refugees and L’Auberge des Migrants.

The findings were broadly consistent with our reports, that of the French ombudsman’s office, and that of Human Rights Watch.

The latter highlighted the fact that “the results of the French investigation are consistent with Human Rights Watch’s principal findings – that police routinely used chemical sprays on migrants, including children, while they were sleeping and in other circumstances in which they posed no threat, and regularly sprayed or confiscated sleeping bags, blankets, and clothing, apparently to press them to leave the area.”

While the investigation denied Human Rights Watch’s charge that the police used pepper spray to carry out such abuses, it concluded that the hand-held aerosols employed in these acts contained tear gas. Rather than reduce the gravity of police abuses, this does the reverse – for the effects of tear gas are more severe, and its long-term effects possibly more harmful, than those of pepper spray.

Other findings in the report were congruent with the experience of our volunteers in Calais. The investigation noted, for example, that police often failed to comply with their legal requirement to wear identification badges. Consequently, those who commit abuse cannot be traced or made accountable.

The investigators offered a number of recommendations, which included a formal reminder to officers that they are obliged to wear their badges for accountability purposes. Furthermore, the report noted the need to provide debrief and counseling to the officers deployed in the region, as well as a recognition of the humanitarian emergency.

Such recommendations are, as noted by Bénédicte Jeannerod, France director at Human Rights Watch, “a step in the right direction”. But recommendation must be followed by implementation – and even then, the fundamentals of the ongoing humanitarian emergency in Calais require additional redress.

Help Refugees has long challenged the comportment of police in the area, and since 2015, has won a number of legal challenges against the local authorities and police forces. In the summer, for example, a court ruled in our favour and declared that the harassment and effective prohibition of food distributions was unlawful and inhumane.

But winter is now approaching, and the need for our food distributions is only increasing. 800 refugees are sleeping rough in the area: there are over 100 unaccompanied minors as young as 9 years old. Help Refugees continues to provide them with bedding, clothing and warm, nutritious food – which we can’t do without your help. To help us continue to help them, please donate here.

Your ticket for the: Police violence confirmed in Northern France