Not a statistic, not a headline, not a political pawn. A person. 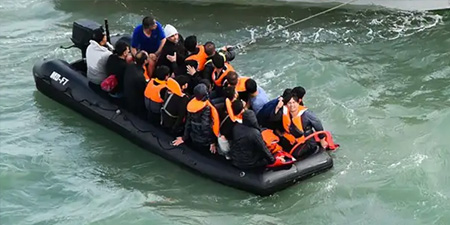 Imagine ending your life in the murky waters of the English Channel. Last week a woman went missing in the Channel after falling off a boat. Presumed dead. A refugee originally from Kurdistan, she had been living in the makeshift refugee camps in Northern France, where close to 2,000 people are surviving in dire conditions. Another man was found dead in the sea on Tuesday night, wearing a life jacket with plastic bottles attached for buoyancy. Two deaths in a week.

Have you seen the programme Years and Years? The dystopian future it imagines has gripped the minds of millions of viewers. It’s a future in which Trump has been re-elected, climate change is raging, and another refugee ‘crisis’ shows a world of people on the move. One scene makes viewers gasp as they see a body washed up on a shore in Kent. The body of a white person, fleeing Calais.

Except this isn’t a dystopian future. It’s a dystopian reality. It’s now. And the bodies aren’t white. The hierarchy society places on human lives has become staggeringly clear. Alan Kurdi, the young Syrian boy washed up on the beach in Turkey made the world stop in 2015. It’s an image stark in many of our minds. The desensitisation that’s happened to the world in the last four years is indicative of a deeper numbness. We can switch off so easily to suffering, and to the human stories that sit behind it. Every story is different; a human rights activist in Iran, a person made to do national service in Eritrea, a person leaving the famine in the Yemen, a man holding hands with another man from Afghanistan… the stories go on.

Boris Johnson this week made a statement to refugees attempting the Channel crossing: ‘we will send you back.’ It’s snappy, to the point and draws in the media. It also breaches international law. The Prime Minister perhaps needs reminding that asylum is a right and asylum claims have to be determined according to the law and the individual circumstances of a case. The UK’s obligation is to assess claims fairly and grant protection to those who need it. A fair asylum system will ascertain who is a refugee. Refugees are fleeing from something. Boris Johnson calls them illegal. It is a completely inappropriate way of describing someone who is seeking refuge. Refugees must flee across borders. If there are no legal routes of passage then how else can people arrive in a place of safety other than by so-called ‘illegal’ means. But the people themselves are not illegal. They are refugees seeking sanctuary.

It seems Boris Johnson has missed the point. Or has he? Is his point to actually sow seeds of discord, to paint a picture of refugees as dangerous; as criminals – rather than simply as human beings with a right to have their voices heard? Is he trying to appear as the decisive hero of the hour with a knee-jerk reaction that does not solve any of the underlying issues? Is the goal to bolster the populist agenda of the ‘hostile environment’? Yes, it’s very dangerous to cross the Channel by boat. It’s also very dangerous to cling to the bottom of a lorry or to jump on board a refrigerated vehicle or one transporting chemicals. All these routes carry danger. They are all ‘illegal’ because so-called ‘legal’ routes are, for the most part, off limits.

There is a wilful determination on the part of the government to refuse to see many of the complexities and intricacies of the individual human stories. The ongoing joint UK-French government response to human suffering in Northern France appears to consist of dispersals and push-backs, arbitrary detention and removals, evictions and demolitions, the blocking of humanitarian aid, sanitation and medical care, and the vilification of refugees in the press. As the so called ‘safer’ irregular routes become increasingly difficult, even more dangerous routes are attempted in the sea. Displaced people in Northern France who are hoping to reach England are not being presented with viable alternatives, whether these are legal routes to safety in the UK or acceptable solutions in France or elsewhere on the continent.

So what’s the answer? There are policy overhauls required to make a functioning asylum system across Europe. Reforming Dublin regulations, cross-border collaboration on legal routes of passage for unaccompanied children, resettlement scheme negotiations to be done. But perhaps the answer is simpler than that. We must engage with human stories. Have a cup of tea with the neighbour who has recently arrived in the UK and moved in down the street. They could probably do with a friendly face. Smile to the person next to you on the bus who is lost and need directions. Offer them a hand. Our politicians breed scepticism and disbelief about the ‘other’ amongst us. We have the power to challenge this divisive rhetoric and actively seek to see the good in people.

To everyone who knew, loved and cherished the woman missing in the Channel this week and the man who lost his life in the same dark waters, we stand with you in demanding justice.

Maddy Allen is a Field Manager for Help Refugees in Northern France.

Your ticket for the: Not a statistic, not a headline, not a political pawn. A person.

Not a statistic, not a headline, not a political pawn. A person.