The experiences of a Michelin star chef volunteering on Lesvos

Merlin Labron-Johnson is a chef and restauranteur. At only 24, he received a coveted Michelin star. But recently he swapped London for the Greek island of Lesvos, cooking for 900 refugees each day at the One Happy Family Community Centre. Here he shares his experiences of his time on the island – the highs and lows of life as a volunteer helping refugees living in one of the most overcrowded and under-resourced camps in Europe. 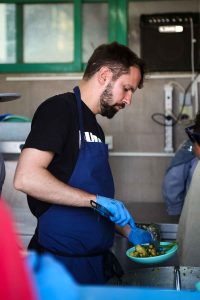 Arriving in Lesvos on a Sunday night in October was not quite what I expected. The taxi took me past beautiful beaches, grand old aristocratic buildings and rivera style hotels. Outside the cafes, local people were congregating and basking in the warm air of their extended summer. There were no tourists. The air was thick with the smell of souvlaki and cigarettes.

I was under instructions to meet with a man called Mahmud upon my arrival. Mahmud is a man-about-town, cafe owner and in charge of catering for refugees at the One Happy Family Community Centre. He is also a refugee himself, having fled war-torn Syria two years ago. Back home, he worked as a doctor. He wanted to touch base before I embarked on my kitchen takeover, to brief me on the situation in Lesvos and what to expect during my time here.

I met him at 10.30pm in a local bar and over a double espresso he proceeded to give me the full lowdown. He started by describing the nearby refugee camp of Moria, the most overcrowded in Europe. It was originally built for 2000, but is currently four times capacity with around 8,000 refugees living in the most unthinkable conditions. Food is a huge problem. Sanitation is a huge problem. The very basic needs for survival are often not being met.

“The atmosphere was no different from my kitchen in London”

With the current system, refugees will wait at least two years before even being granted an interview where they can begin to discuss their next steps – their future. The state is intentionally letting people live in the most inhumane conditions in order to send a message to future asylum seekers. But it is failing to deter them. Every night hundreds of refugees are making their way across from Turkey and those that survive the journey are sent to Moria.

The conversation turned to the centre where I’d be cooking. It’s run by a mixture of grassroots volunteers and refugees. The day centre is on a different part of the island to Moria and is a safe haven away from the day-to-day trauma of living in camps. Refugees can attend classes, talk to social workers, play sports and eat a free meal. The kitchen, I’m warned, is rather ill equipped to cater for the masses that turn up each day for lunch. There are just two large pots. No oven. No fridge. The trick is to cook everything in the same pot and then serve it in one move. One component dishes only. Because when you have 900 desperately hungry people in a line, you really want the queue to move swiftly. We placed my order for the next day: Fresh tomatoes, onions, tinned mushrooms and bulgur wheat. I retired to my bnb to get some sleep and process this information.

“Each day in the kitchen was a joy, There was something profoundly beautiful about these people of different origins, race, gender and religion coming together” 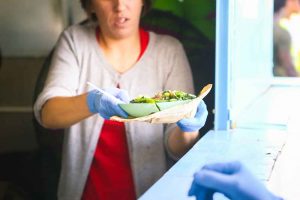 The following morning I was introduced to the kitchen team: Mohammed from Burma, Fifi from Zimbabwe and Zarah from Iran. First onion peeling, chopping, tomato chopping. The mood was light and everyone was focused on what they had to do. Two German volunteers jumped in to help. We were the United Nations of onion peeling. The atmosphere was no different from my kitchen in London, Everybody know what needed to be done. I was welcomed like an old friend and met so many people that I forgot everyone’s name.

Each day in the kitchen was a joy, There was something profoundly beautiful about these people of different origins, race, gender and religion coming together for the greater good which in this case, was a bowl of warm, nourishing food. Everybody was equal and everybody was treated fairly. Mahmud would watch over, offering advice and smoking his shisha pipe. Arabic music was blaring from an old guitar amp via youtube on someone’s broken iPhone.

“what if I burnt the pot, didn’t make enough or accidentally added too much salt?

I’d have been responsible for 900 people going without food”

Over the course of the week I made bulgur wheat pilau, potato, chickpea and tinned green bean curry with coconut flavoured rice, chicken, rice n peas and the piece de resistance: A dhal made from red lentils, rice and frozen spinach.

At times it was challenging, coordinating the timings, working with no hot water, blunt knives, language barriers, getting the quantities right. I was absolutely terrified of messing up, what if I burnt the pot, didn’t make enough or accidentally added too much salt? I’d have been responsible for 900 people going without food and I don’t think I could’ve coped with that.

I don’t think it could’ve costed more than 30p a head but these bowls of food were sacred, a shimmering light in the darkness. Food that was bringing communities together and giving people hope and dignity. It’s hard to look at food the same way after this experience, enriched by the juxtaposition of cooking in a million pound kitchen in Mayfair and being here, stirring these big warped casseroles with a giant oar that had been rescued from a beach. 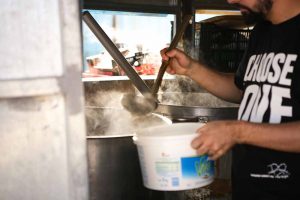 The sense of community, equality and camaraderie belies the fear, poverty and suffering of life in camps like Moria. This is best illustrated in a quote courtesy of Taim from Syria: “In Moria everyone is fighting. The reasons are the bad conditions of the camp. We have to share the toilet and the bathroom with a lot of people. There is not enough food. In the night it is very cold, in the morning it is very hot. I love Greece, but I hate Moria. The reason I came to One Happy Family, is because I needed a place where I feel normal again.”

To gain more perspective, I decided to visit some of the other projects that are being supported by Help Refugees. I went to the Attika Warehouse where they store, sort and distribute donations. Like I’d seen in the Calais Jungle, camp residents were being provided with ‘care packs’. These were sets of donated clothing that would be distributed outside the camp – providing not just something clean to wear, but also warmth and a bit of a dignity.

How could this be happening in Europe, in 2018?

And why do we, in England, know so little about it?

On the other side of the Island I met the Refugee Rescue team. They’re a group of volunteers with a boat who keep watch over the sea during the night, and when they see or hear of refugees in trouble, they scramble to rescue them. Its hard to imagine the fate of thousands of desperate refugees, were it not for the work of refugee rescue. Nobody back home has heard of them or the incredible, dangerous and selfless work that they are doing to save human lives every day.

I met volunteers from a group called Watershed. They’re working to help improve sanitary facilities inside the camps. Access to clean water and adequate sanitation are enormous challenges in Lesvos camps. These guys are the unsung heroes, working tirelessly to try and make improvements.

I also visited the ‘lifejacket graveyard’. A dumping ground for the thousands of lifejackets from refugees who’d braved the journey from Turkey. In a remote part of the island was this orange and white mountain of misery, a reminder of all those that risked their lives on this journey and a reminder of all those that didn’t make it. How could this be happening in Europe, in 2018? And why do we, in England, know so little about it?

“Tears of joy and tears of sadness. A moment I will never forget.”

On my last day in the camp we ran out of food. The two large pots were full to the brim and there was no way of being able to prepare more in advance. Those that were at the end of the queue were told they’d have to wait while we whipped up a soup. They’d been queuing for hours and wouldn’t have eaten since the same time yesterday.

As we fed the final guests a greek musician arrived to play his guitar. A large crowd gathered around him as he sang ‘Peace be upon you’. He was joined by a Syrian refugee pop star who had the most wonderful voice. As he sang songs which I can only presume were familiar to his audience, many of the crowd began to cry. Tears of joy and tears of sadness. A moment I will never forget. 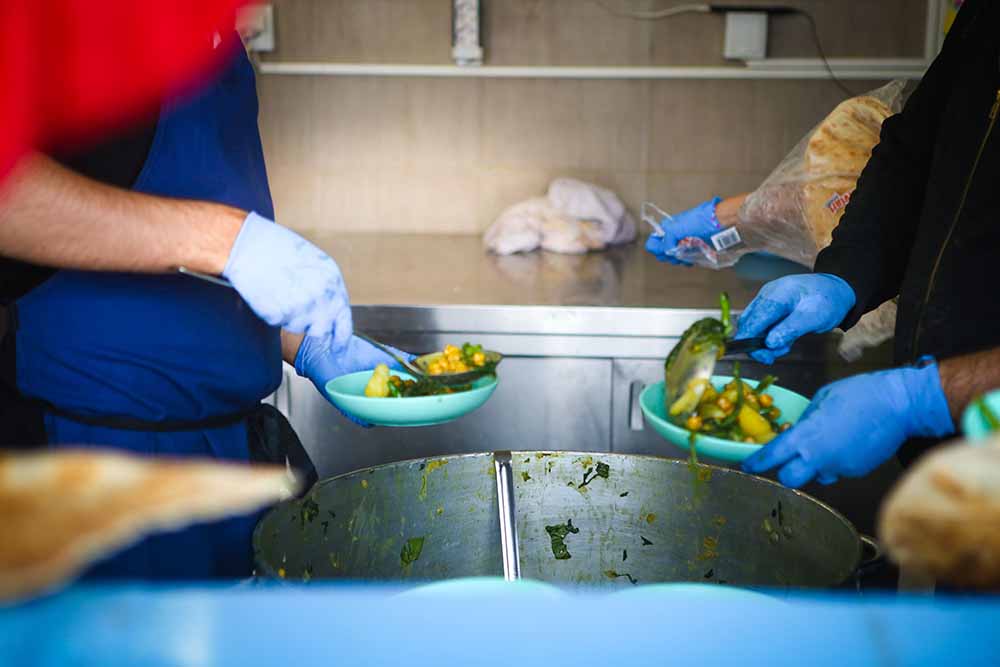 Your ticket for the: The experiences of a Michelin star chef volunteering on Lesvos

The experiences of a Michelin star chef volunteering on Lesvos