Mohammed mixes milk to make cheese. He’ll sell the finished product in the refugee camp he calls home. The money will help support his family. “We make it just the same way we did in Syria”, he says.

Refugees are sometimes portrayed in simple binaries, whether it’s as passive victims or superheroes overcoming all the odds. But the reality is far more interesting.

Since the so-called European refugee ‘crisis’ began in 2015, over one million refugees have passed through Greece seeking safety. Around 60,000 refugees now live in the country. And three years after many people arrived, the tenacity, drive and ingenuity of these newcomers is starting to pay off.

Mohammed’s business is just one of many examples of refugees using their skills and experience to build new lives in Greece. And with unemployment in the country high, more and more people are starting their own businesses to survive. 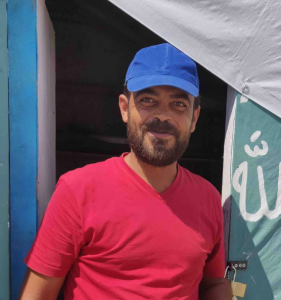 Mohammed currently lives in a refugee camp in Greece. With limited resources (but a lot of passion), he and his wife are running a thriving business selling Syrian cheese, working with a local Greek farmer to source quality milk.

In the more urban setting of Athens, another business is about to open its doors: a beauty salon. Refugee women from Morocco, Iran and Afghanistan are leading the development of Layali Salon. Refugee women face unique difficulties when settling in an unfamiliar city. With support from local initiative Project Layali, this enterprise will provide both employment and training opportunities for women starting a new life in the city.

Even on Lesvos, an island at very sharpest end of the crisis, refugee businesses are taking off. A powerhouse of energy, Mahmud splits his time between volunteering at a local community centre and running his own restaurant. Mahmud was a doctor in Syria, but finding himself trapped on the island, he launched a restaurant in its capital Mytilene. Reem serves traditional Syrian food to hungry tourists, volunteers, locals and refugees alike. And the restaurant’s reviews speak for themselves.

Life for many refugees in Greece is extremely tough. Often denied freedom of movement or access to employment, many people have few opportunities to rebuild their lives. But while it’s so often the media staples of life jackets, dinghies and crumbling refugee camps that cross our screens, we’d like to take the time to also celebrate the positive. And the brilliant, ingenious and delicious refugee-run businesses springing up across Greece seems like a good place to start.

Cover image: Mahmud (third from left), alongside other volunteers at the One Happy Family Community Centre on the island of Lesvos.

Your ticket for the: Meet the refugee entrepreneurs building new lives in Greece