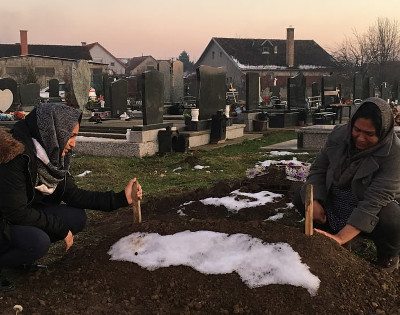 Madina was six. She was from Afghanistan, and with her family – including mother Muslima, father Rahmat and five of her nine siblings – had been living in Serbia for almost a year.

They were waiting, in hope, for legal passage to Hungary. Yet as the months passed, and the potential for forward movement became increasingly unlikely, the family decided to try and cross to Croatia on foot.
With four children under ten, they scrambled over fences and through fields, and – miraculously – made it safely. The family was resting under blankets in a park, said Madina’s mother, Muslima, when Croatian police officers arrived. The Husseny family hoped that they would be taken to the police station, where they could apply for asylum – their right under European law. Instead, Muslima said that the officers drove them to the train tracks and ordered them to walk back to Serbia.

Enforced pushbacks such as these are illegal, yet they are commonplace on the Balkan route. Reports from groups such as Medecins Sans Frontières detail the abuses faced by refugees, including children, as they attempt to move further in to Western Europe.

In fact, there have been many reports of people being ordered back along the same tracks as the Husseny family. “Many of our patients tell us that the [Croatian] police allegedly brought them to the train line and ordered them to cross back. It’s a recurrent pattern that we hear,” said Andrea Contenta, MSF’s humanitarian advisor for Serbia, to The Guardian.

The family pleaded with officials. “I begged: ‘If you won’t accept us, please let us stay here tonight. In this weather we are already tired and cold, the children are little,’” said Muslima. But the police would not relent. The family were forced to walk – in darkness – along the tracks, without being warned that trains were still running.

It is on these tracks that Madina, described by her older sister Nilab as “always smiling, always the one everybody liked”, lost her life. A train charged down the tracks, taking the family by surprise, and hit the young girl.

The family stumbled back to Croatian border officials, clutching Madina’s body and pleading for medical assistance. Instead, the family were ordered in to a van, and each person counted – ready to be deported.

The van paused after some time, and Madina’s body was transferred to an ambulance. Nurses worked on her for a while, but they then drove away – ignoring Muslima’s desperate pleas. “I told them: ‘I want to go with my child, wherever you are taking her,’” she wept. “I asked: ‘Why are you sending her alone, I want to be with her, it’s my right to be together.’”

Muslima and the rest of the family were deported to Serbia that night, and held in a police station overnight – their clothes still covered in Madina’s blood. They were not given confirmation of whether Madina was dead, details of where she was being taken, or even a number to call.

It was only with our support, and that of MSF, that the family were able to wade through the bureaucratic complexities that stood between them and Madina. When her body was finally returned, mud and blood were still smeared on her face.

“They just treated her like an animal, like a dog,” said Nilab, with tears in her eyes. “Such a small body, and they didn’t treat it like a human.”

Madina’s burial was the source of yet more suffering. The family were not given adequate water to perform the washing rites to central to Muslim funeral rites, and were ordered to bury her immediately. In the face of the family’s protests, Serbian authorities threatened them with deportation. So, unwillingly, they agreed.

“I will carry it in my heart for ever,” said her father, “that I did not give her a proper ceremony.”

Madina’s death was not the first along the Balkan Route. Such needless loss of life is caused by both a lack of safe and legal routes to sanctuary, and the illegal actions of border officials. For as long as this state of affairs continues, her death will not be the last.

Help Refugees supports displaced people living in Serbia and Croatia, like Madina’s family, with a range of projects – from the provision of shelter, food and bedding, to support in navigating complex bureaucracy. As the cold weather sets in, help is needed more than ever. Please, if you are able, donate here. Thank you.

Your ticket for the: Madina Hussiny, 6, killed at the Croatian border following illegal pushback