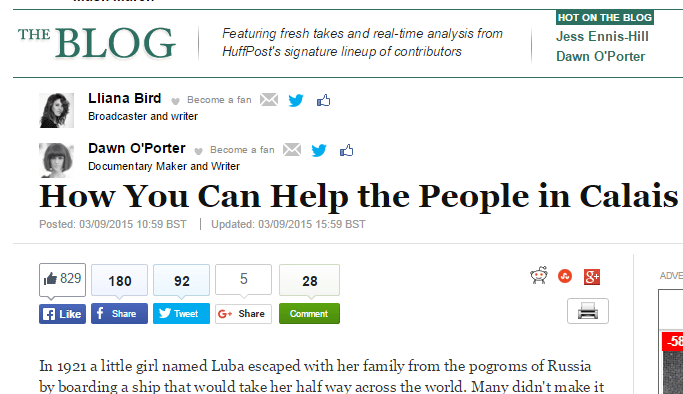 You can read the original on the Huffington Post here.

How You Can Help the People in Calais

In 1921 a little girl named Luba escaped with her family from the pogroms of Russia by boarding a ship that would take her half way across the world. Many didn’t make it to the end of that journey. Some got sick and died on the way. Others drowned when the fleet they were travelling with was hit by a storm. But, when the few that survived finally made it to their new country they were greeted with open arms. They were welcomed, helped, and made to feel safe.

That little girl was Lliana’s grandmother, and her story isn’t unique. Look back in your own family history, or that of your friends and there are bound to be similar tales of migration, survival and new beginnings. After all, Britain is largely an island of first, second or third generation immigrants, and it is all the better and richer for it. And so, it has been with a heavy hearts that we’ve watched the way our country has reacted over the past few months to the global refugee crisis we are now facing.

The British government, so happy to send aid to countries far far away (and to send the military when it suits us as well) shows a whole different attitude when the “problem” is actually on our doorsteps. Our prime minister, pandering to domestic politics, refers to the men, women and children living in dire conditions in the makeshift refugee camp in Calais as a “swarm”. Factions of the media consistently dehumanise those trying to enter Britain, as if risking your life to try and create a better one for yourself and your family is somehow something shameful. But it is us who should feel ashamed. We are facing a global crisis, with over 60million people displaced from their homes (more than any time since World War II), and whilst Germany welcomes 30,000 Syrian refugees with banners and cheers, Britain, one of the richest countries in the world, reluctantly pledges to take in just 500. And lets not forget we have played a significant role in the unrest of many of the countries these people are fleeing from.

So, whilst our media fuels the fears of the masses with scaremongering tactics and our government lamely looks on, the people of Britain have begun to take matters into their own hands. Charities, organisations and individuals have sprung up and stepped forward to help in any way they can. Our inspirational friends Tom & Shizuka travelled to Calais to do whatever they could to ease the suffering there and returned with incredible tales – of the animated and intelligent Sundanese student who had been so excited to come to Britain because “he heard that they were friends of Sudan” but now wanted to give up because he heard “the British and their government hate us”. Of the young man who thought Britain would welcome him and his family because “Britain had been a colony in his country for 200 years”. Of the children who have survived unimaginable horrors still laughing and playing football, despite being now forced to live in conditions not fit for vermin.

The fact is many of the people living in Calais are well educated. Most speak at least two languages, some are doctors, others teachers. All simply want the opportunity to work hard and better their lives and those of their families (despite the media’s fear mongering headlines 93% of benefits claimants are born and bred Brits). All must be tenacious, ambitious and savvy to have even survived this far (just the kind of driven people who I believe would be an asset to Britain). But… this isn’t about politics. This isn’t even about immigration and whether Britain should allow more people into the UK. Whatever your stance on migration, its irrelevant. This is about a humanitarian crisis happening right in front of us. There are thousands of people living in Calais right now. People without food or shelter. People being treated without dignity and being forced to live it terrible conditions. People escaping from war or poverty. And whilst others decide their fate (and their ultimate countries of residence) it is our duty, as fellow human beings, to do what we can to ease some of their suffering and meet their basic human needs.

How has it taken the image of a dead child, face down in the sand, for so many people to realise they have a heart? The pictures of poor little Aylan Kurdi were heart wrenching, but maybe the saddest part of it is how many young lives have been lost that seemingly had no impact at all. That’s the harshest tragedy imaginable. It’s time to take action and stop this.

Ourselves (Lliana and Dawn) together with our friend Josie Naughton (all of us, as it turns out, British born children or spouses of “migrants” ourselves) have set up #HelpCalais (now expanding to #HelpRefugees) alongside Tom & Shizuka and the response so far has been incredible. We have been inundated non stop with offers of help, volunteers, donations, and words of encouragement.

Turns out most of the British public actually want to help, and are far more compassionate than our press and government paint us to be.

We will be returning to Calais (and hopefully going on to Greece and Macedonia) with a convoy of vans and trucks stuffed full of essentials on the 17 September and if you’d like to help too there are tons of ways you can get involved too.

You can give to our justgiving page, order items off our Amazon Wish List, do an online food shop, or even just send us a drawing/ message of hope and solidarity for us to distribute in the refugee camp (perhaps ask your child to send in a drawing?)

Lliana knows how lucky she was that hergrandmother was treated with dignity and kindness when she was an 11-year-old refugee, and I hope that if Britain ever faced a disaster we too would be greeted with open arms. Let’s hope that never happens, but let’s also help those it is happening to now in any way we can.

You can donate at our Justgiving page here: –https://crowdfunding.justgiving.com/kentforcalais

Your ticket for the: Lliana and Dawn on the Huffington Post – ‘How You Can Help the People in Calais’