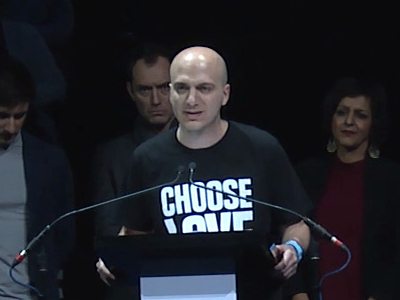 We were privileged to be invited to be part of the Letters Live event in London last week. Each night an array of celebrities including Benedict Cumberbatch, Jude Law, Sir Ian McKellan, Gillian Anderson, Sir Bob Geldof, John Bishop, Shappi Khorsandi, Peter Capaldi and Olivia Coleman read moving, hilarious, insightful and tragic letters from past and present.

However, for us the highlight was ‘A Letter to Europe’ written by a refugee in the camp in Calais calling on the governments and people of Europe to stop turning a blind eye to the abysmal and inhumane conditions there and to open their hearts and open their borders. The letter states ‘We are not terrorists. We are not soldiers. We are not politicians. We are just ordinary people in pursuit of our peaceful life’ and goes on to say that this situation ‘will put the history of the 21st Century to shame’.

The letter was read by our friend Hassan, a Syrian refugee and former English teacher who was imprisoned by the Assad regime, before making the perilous journey to Europe, overcoming near death on the way. It brought the entire audience to tears, and was followed by a standing ovation. It was truly a proud moment to watch Hassan, flanked by Benedict Cumberbatch and Jude Law take a bow at the end of the night. 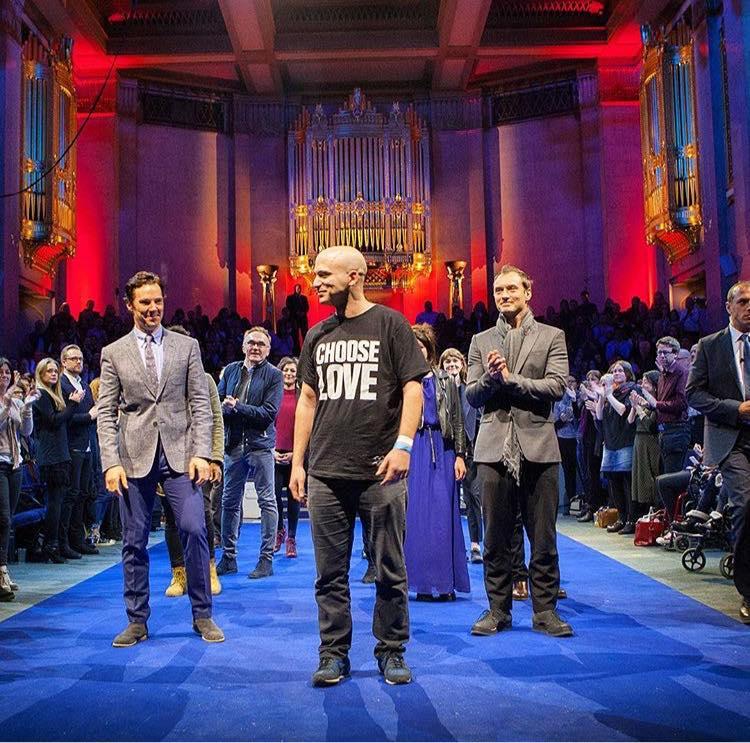 Now they are fleeing from their home and countries, you call them refugees. They are humiliated in Europe.

Children, instead of drawing sweet childhood memories, are drawing the cold of winter, lack of water and food, disease and standing in the camp’s long queues.

This will put the history of the 21st Century to shame.

In the centre of Europe, cities with the population of 7-8 thousand people have been created for refugees with cold nights and dangerous, lawless and hopeless tiring, hungry days.

Death is just a step away from refugees.

Sometimes food is brought in via charities and people with hearts of gold but unfortunately it is not enough. Sleeping in tents while shivering from cold and nightmares of homes on fire and death. Fear of radical extremists and fights and tear gas thrown by the police into the camps locations and tents.

Dear Kind people of Europe and the UK,

I don’t believe that in the heart of Europe, centre of technology and civilisation, you don’t know that such a place exists.

History will judge all of us according to our actions. This will stain the heart of history and humanity and it can never be removed.

Dear people of UK and France,

Please open the doors to us refugees and save us.

We are just ordinary people in pursuit of our peaceful life.

I only want to live. Death is following me like my shadow in this hellish Jungle of hopes.

Please open your hearts and borders to us and End the War.

We would not be able to do our work without your support and kindness. Many refugees we help are fleeing the conflict zones of Iraq, Syria and Afghanistan. Others are trying to escape political oppression in countries like Eritrea. All are human beings like us. As well as providing immediate physical assistance, we want to help refugees maintain their dignity.

Please click through if you would like to find out more about our work in Calais, Dunkirk, Lesvos, Samos, Idomeni  and other locations. If you would like to know how you can help refugees, please check out our ‘How to Help’ section where you can find out how to fundraise for us and how to make a donation. Thank you!

Your ticket for the: Watch Video – Hassan Akkad at ‘Letters Live’ for Help Refugees