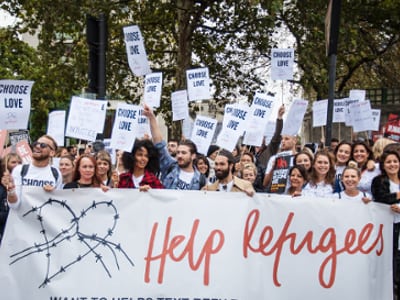 Since March this year, criminal barristers have been on strike. They are rejecting state-funded cases, to protest cuts to legal aid that are keeping those most in need from accessing adequate legal representation. On the 8th May, Labour MP Richard Burgon stated in the House of Commons that 90% of criminal barristers voted for this industrial action. The justice system is facing a crisis over this issue.

For immigration cases, the scope of legal aid has been rolled back considerably. Now, it primarily covers applications for asylum.

Previous grounds for legal aid included detention appeals, support for victims of trafficking who wished to remain in the UK, and asylum support (e.g. housing or maintenance funds).

A report led by Labour’s Lord Bach stated that legal aid funding had fallen by £950million from 2010-2017. The aforementioned Richard Burgon MP also stated that, since 2010, the Ministry of Justice’s budget is expected to be slashed by a further 10% (£600million) in the near future.

The lack of legal aid provisions has resulted in serious difficulties for many refugees, including children. Amnesty International warned, in 2016, that teenagers may be forced to represent themselves in cases where they face deportation, due to the lack of legal aid.

When asylum seekers are denied legal aid, they are left particularly vulnerable to exploitation. They are not given the right to work until their applications for asylum have been approved – which means that they must depend on their savings, or support from family and friends, to pay their legal fees.

If their cases are unsuccessful, failed asylum seekers are stuck – many detained indefinitely or facing removal – with no money to pay for additional appeals, and no recourse to public funds.

According to a study by BiD UK, less than half of those in detention in the UK have access to legal representation, with just over half of this number saying they have a legal aid solicitor.

The government’s ‘hostile environment’ policies, which seek to make life as difficult as possible for undocumented people in Britain, have added to the injustices suffered by migrants (or those perceived to be such).

In recent weeks, the Windrush Scandal has dominated headlines in the UK. It was revealed that thousands of people, who were invited to come to the UK from the Caribbean (then a part of the Commonwealth) some seventy years ago, have had their right to be in the UK challenged. Many have lived here for their entire adult lives, but have recently been sacked from long-term jobs, denied benefits, and lost their housing. The latest news revealed that 63 people may have been wrongfully deported.

In light of the cuts to legal aid, the Windrush generation may be unable to access support to secure the legal status that they are entitled to. Former Home Secretary, Amber Rudd, has promised to waive fees for the relevant applications. However, applicants will still need to provide extensive documentation of their time in the UK before the Home Office grants them Indefinite Leave to Remain or British Citizenship.

The Immigration Advice Service, one of the largest immigration practices in the UK, have had their legal aid contracts renewed in most major cities. In addition to this, new contracts in Newcastle, Derby and Bristol have been granted, as well as contracts in every detention and removal centre across the UK.

While these grants are gratefully received, this does not indicate a widespread move by the government towards increased legal aid. Many law firms that accept legal aid cases will still be struggling under the massive demand, which outweighs their capacity and resources.

While IAS will be using this increased support to help some of those most of support, the struggle for fair access continues on throughout the justice system.

This article was written by Damon Culbert, a specialist content writer for the Immigration Advice Service. The IAS was formed out of the Immigration Advisory Service, the UK’s leading immigration law charity. They have aimed to stay true to their charitable history, undertaking many legal aid cases alongside commercial immigration services.

Your ticket for the: Legal aid crisis denying justice to refugees, asylum seekers and migrants