Layla and the Lovebug: A Community Chooses Love 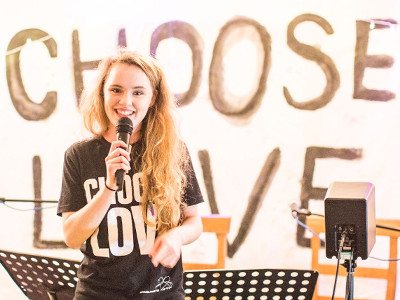 This winter, we have been amazed by the generosity and creativity of our supporters’ fundraising efforts. From upcycled candles to football matches, mini-festivals to themed parties, your kindness – and that of your friends, colleagues and communities – has been expressed in imaginative and inspiring events across the world! One of these was Layla Fraser’s magical musical evening – which she has written about below. Layla, we’re so grateful for everything that you have done for Help Refugees – thank you!

“Okay, so I guess I’ll start from the beginning. My family and I first got involved in the Calais Jungle in Autumn 2015. One thing we did was to move an electrical generator into the camp, so that refugees and volunteers were able to charge their phones. The generator also supplied electricity to surrounding charities in the camp. We stayed there until summer 2016, a few months before the demolition of the Calais Jungle in October 2016. Since then, we haven’t had much involvement with refugees in Europe as part of an organisation, apart from personally staying in contact with friends we had made.

In October 2017, I really wanted to find a way to get involved again – and one that wouldn’t be too difficult for me to keep up with, alongside my full time job in England. So I ended up going to the Help Refugees warehouse in Calais to volunteer there, and I absolutely loved being involved again – and seeing some of the friends I had known from before that are still in Calais.

It was a privilege to hear people’s stories, to meet so many like-minded people that all had this crisis and these precious people’s safety as their priority, and to be a part of that community for that short time. But, I knew early on that this wasn’t the last time I would be there. You first choose love, but then you action it, and you live it out. Choosing it is just the start of what becomes habit. And I was hooked. 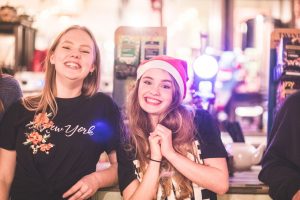 You see this kind of suffering of these people that are just trying to be warm and safe like we all take for granted. And they are right on your doorstep. At this point, you can’t just sit back and watch…you must do something about it.

I saw on Help Refugees’ Instagram that December would be a fundraising month for them, and anyone could get involved. So, I did! I talked to a local independent bar in my town about hosting a fundraiser there, talked to some local bands about performing some acoustic tunes, finalised a date and everything happened from there. I organised it all in the space of about three weeks, and people loved getting involved and coming alongside me to help out.

I made a public Facebook event, made posters and put it up in public places, and asked shops if they would be willing to donate anything as prizes for a raffle I wanted to do at the fundraiser. So many did! Just to give some examples, we had ten free coffees from Cafe Nero, a gift box from Lush, a six people pamper party ticket for The Body Shop…and so many more! Another venue in my town even offered to get involved in the next fundraising event and host it for free! People love to CHOOSE LOVE alongside you, and it’s amazing. 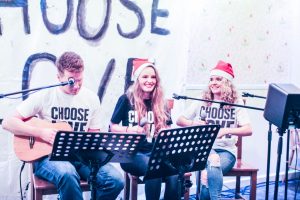 So after all the organising, it’s time for the night…and who doesn’t like to party for a good cause? We covered the place in fairy lights to set the scene, with acoustic music and conversations as we sold raffle ticket by raffle ticket with the prizes shining on the table. I started off the night with a brief background of the charity, and how people could expect their money to be put to good use. I talked a bit about other ways to donate, the Choose Love store and the current situation faced by refugees in Calais. I informed people of the need in Calais, and told them how easy it is to get involved out there – to make the food for refugees there, to donate and sort the gloves that warm their hands. How much easier and more freeing it is to be on the frontline, than it is to take a back seat and watch it all through a pixelated screen. I could see little fires lighting in people’s hearts as they realised they could give that weekend in February or that week off in April and spend it doing something different, something that really helps other.

Then we sang our little hearts out for a while before calling out the winners of the raffle prizes. This was perhaps the highlight of the evening for me as it was a vibrantly beautiful representation of the community that had come together for this cause. Of faces that I recognised and ones that I didn’t, all together in laughter and excitement – and all donating time, effort, thought, prayer and pounds to a cause that they saw needed them in that moment. A picture perfect moment of a group of people choosing love together, and I feel honoured to have created the space for people to do that in this time. That is what it’s all about…creating a space for people to choose love. So, I really encourage you to go ahead and organise a fundraiser in your communities. 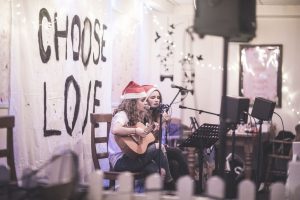 Help Refugees is so grateful to Layla for arranging this amazing fundraiser, and to all of the bands who played and people who donated there. If you are feeling inspired, and would like to organise an event, you can find out more here or get in touch at fundraising@helprefugees.org. We couldn’t do what we do, without people like you. Thank you.

Photo credits to Andy and Esther Teo of Photocillin Photography.

Your ticket for the: Layla and the Lovebug: A Community Chooses Love

Layla and the Lovebug: A Community Chooses Love