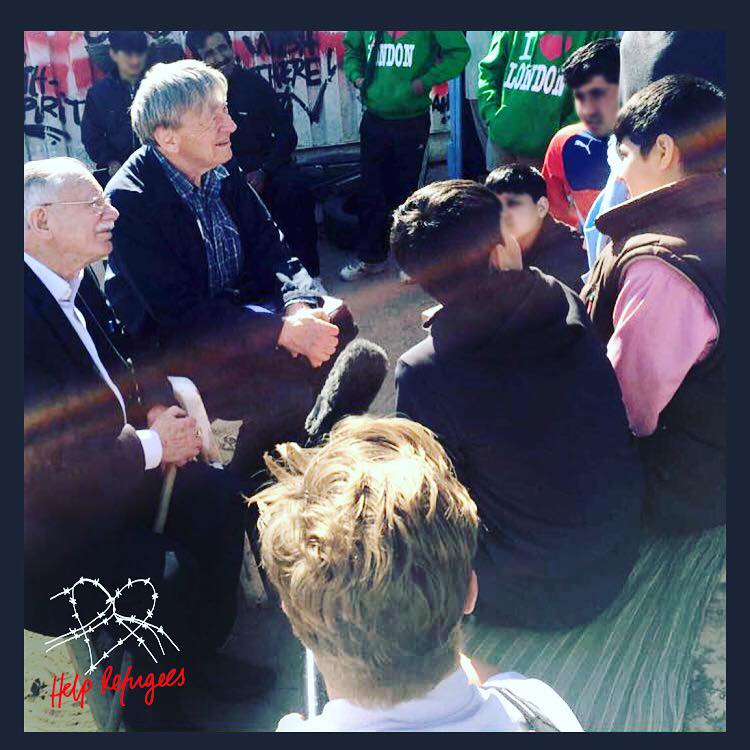 We were honoured to accompany Kindertransport survivors Lord Alf Dubs and Rabbi Harry Jacobi on their visit to Calais to meet some of the unaccompanied minors. Lord Dubs and Rabbi Jacobi, both brought to the UK during World War II, met several boys who also fled from persecution and war alone.

Many of the boys shared stories. Here are just two (names have been changed to protect identities):

Misaq is just ten and from Afghanistan. He was only one when his father disappeared, returning five years later badly beaten. He saw his father being beaten and both were threatened regularly. His father disappeared again two years ago. His mother sent him away because they feared for his life. His mother’s brother paid smugglers. They moved at night on foot with no food and water but occasionally they were put in trucks. On one occasion there were “hundreds” of people crammed into a truck unable to move for hours. He spent three days in Bulgaria climbing mountains with no food or water and saw things that scared him, including dead bodies. Misaq says that now when something happens that reminds him of the journey he becomes ill and scared. The journey took two months.

Ashraf’s story: “I am scared of bombs so I run”.

Ashraf is 12 and also from Afghanistan. He left his home after his father was killed by a bomb. He was smuggled to France with a large group and once he got to Iran he was put in a car boot with other people. He felt claustrophobic and scared. Once they got to the border they were attacked and seven people were shot dead. They were forced to walk huge distances. He says it took them eight attempts to cross into Bulgaria. In Bulgaria the police were fighting them and he was scared about being beaten and was shot at by the police. He said it was very difficult to get food and water. The smugglers left him in Italy and made the rest of the journey with other people in the group. It took them three months.

A particularly touching moment was when Harry told the boys that he was a refugee and as they began to understand you could see them begin to hope that their journey may too have a happy ending.

Your ticket for the: Kindertransport survivors meet Calais’ unaccompanied minors