A new report has found that refugees in the Balkan states, and particularly Croatia, face violent pushbacks to Serbia and are denied access to asylum procedures. Repeated incidences of police brutality, including both psychological and physical abuse, have been documented by volunteer organisations on the ground. Furthermore, these illegal and inhuman pushbacks are not limited to border areas – the “violence occurs… deep within the country.”

The report, prepared by Are You Syrious? (AYS), No name kitchen (NNK), the Center for Peace Studies (CMS) and the Welcome Initiative. Each organization provides daily support to refugees and asylum seekers in Croatia, and has collated thousands of testimonies from people who have suffered from police violence or misconduct. The report notes that while their focus has been on pushbacks to Serbia, “there has been a worrying number of testimonies of push backs from Croatia to Bosnia and Herzegovina and Montenegro, with descriptions of violence very similar to what is described at the border with Serbia.”

Common types of violence were reported as being “hit…with sticks and batons…hit, kicked or slapped, and even threatened with guns…[and] cases of electric taser use.” Furthermore, the rights Ombudsman in Croatia found that the thermovision camera videos went missing exactly at the time of presumed violence against refugees. The organizations preparing the report stated that “such selective disappearance of thermovision video documentation [suggests] that the physical violence against refugees was deliberately concealed.”

Moreover, “psychological violence and deception were testified by those who manage to reach Zagreb, too…Police officers in fact pretended to start the formalization of the asylum application (personal data, photos, etc.), then they make people enter the car while explaining they would take them to the reception center. Once the door of the vehicle gets opened again, refugees realize they were taken back to the border to be pushed back to Serbia. Again.”

As a result, a significant proportion of refugees attempt to hide themselves in woods and forests for fear of a pushback when they enter Croatia. AYS’ report details a number of cases where groups – including children, babies as young as five months old, pregnant women and the elderly – have spent days sleeping in the freezing forests for fear of encountering border police. 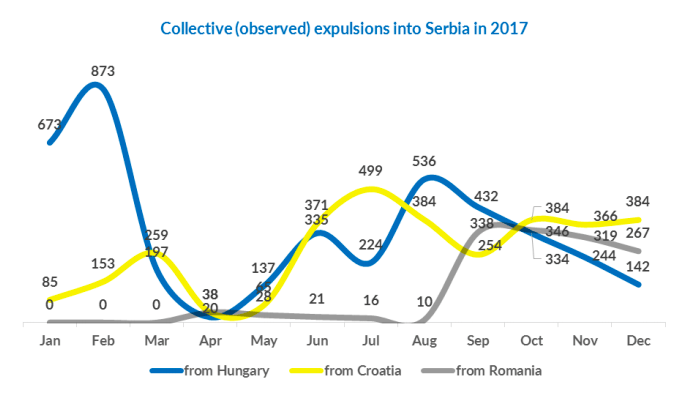 UNHCR records of pushbacks to Serbia. However, the report notes that this is likely to be a conservative estimate, as police officers in the border areas rarely record the pushbacks that they perpetuate.

The violation of refugees’ rights is not limited to the physical or physical abuse that they suffer: they are also denied access to asylum procedures, and therefore legal protection. The report detailed the cases of nine extended families, with young children and those in need of urgent care, who had sought international protection in Croatia. Two families were able to apply for asylum, thanks to the presence of AYS volunteers who observed the procedure; the outcome for two families was unknown; and the remaining five families – totaling 73 people, including at least 34 children – were pushed back to Serbia.

The death of six-year-old Madina Hosseini, after her family was forced to walk back along the train tracks to Serbia in December 2017, highlights the cost of European border aggression. She had arrived to Croatia that day, accompanied by her mother and five siblings. Her mother had informed the police that they wanted to apply for asylum – yet officers ignored the request, and drove them to the border instead. It was dark. Despite the protestations of Madina’s mother, the family was told that they must walk along the traintracks, back to Serbia. It was here that Madina lost her life. Her mother ran to the border guards, her daughter’s body in her arms – only to be separated from her. Madina was taken away in an ambulance, and the rest of the family deported. Notably, the police have said they no longer have the thermovision footage from this evening.

The report and the testimonies gathered are shocking, but they are not surprising. This is AYS’ fourth report on illegal pushbacks, and adds weight to additional research – including a study by Medecins Sans Frontières – that highlights the undeniable violence suffered by refugees on the Balkan Route. The pressing need for a reform of both policy and practice is as undeniable as it is currently unrealistic.

But with your help, we can highlight the abuses committed by Balkan authorities and ensure that the suffering of refugees and migrants is not swept under the rug. Write to your MP, tweet international agencies, and share AYS’ report – together, our voices can be heard.

Help Refugees has supported refugees along the Balkan Route since 2015, with a range of projects – from the provision of shelter, food and bedding, to support in navigating complex bureaucracy. In this freezing weather, your help is needed more than ever. Please, if you are able, donate here. Thank you.

Your ticket for the: Illegal and violent pushbacks from Croatia continue, finds report