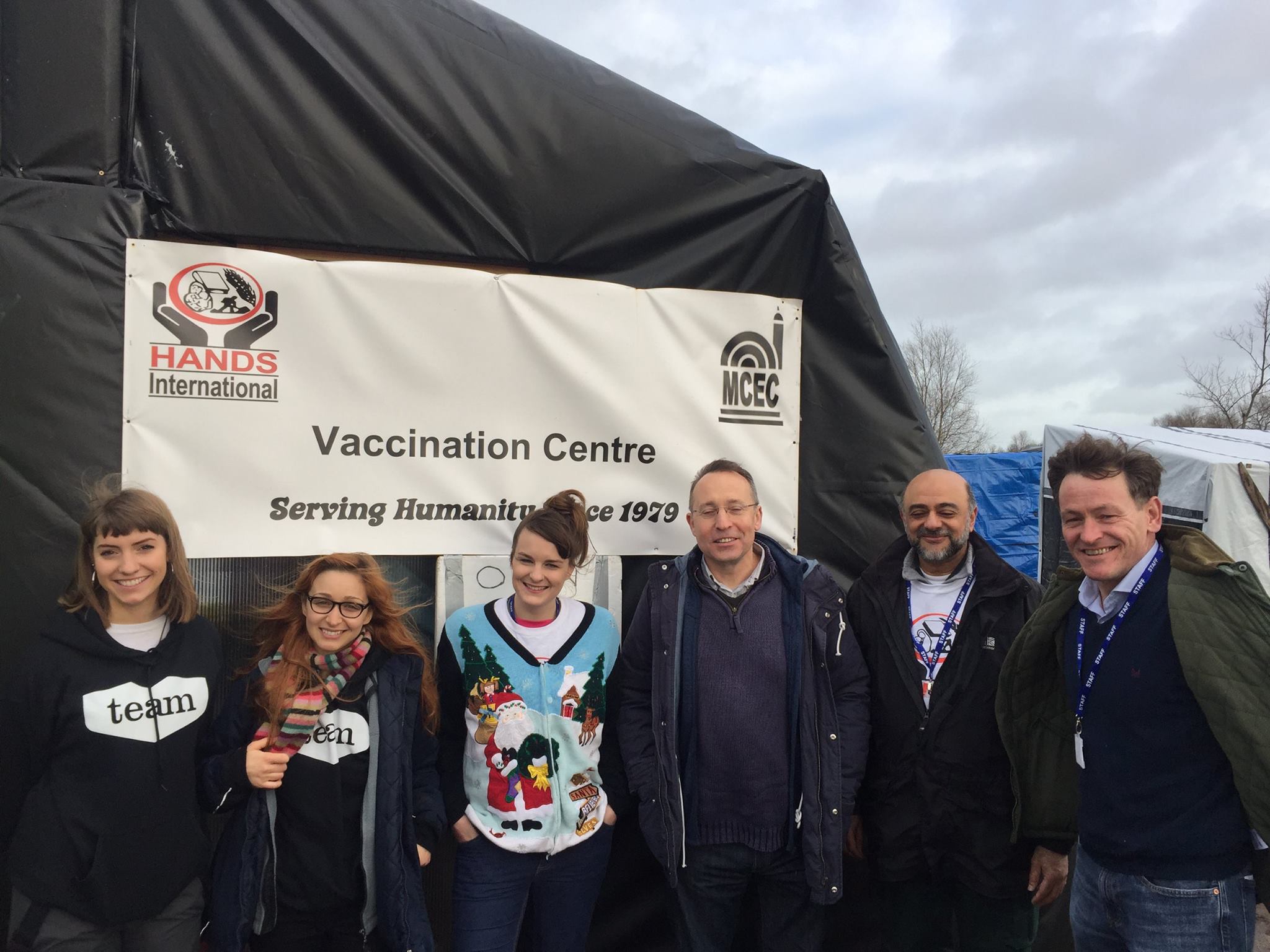 An update from volunteer Annie in the Jungle, Calais –

On Monday, Martin McTigue and Avigayil Ifan of HANDS International who run the Jungle’s Vaccination Centre introduced me to Andy Slaughter, the Shadow Human Rights Minister, so that he could be made aware of the conditions in camp and the wider human rights context around them.
I was privileged and absolutely overjoyed to see how curious and receptive he was to know about people’s lives, their past, how they got to Calais, how they live now and their hopes and dreams for the future. He was beyond impressed at the incredibly dedicated, hard working and selfless volunteers working with L’Auberge des Migrants and Help Refugees – and so he should be, you’re all amazing!

Please read below his touching account of the visit! And who knows, maybe we’ll soon have a full collection of Shadow Cabinet visits!

I wore boots as instructed by my hosts from medical charity Hands International, but the mud was soon coming over them.

I understood why many of the volunteers, like Martin McTigue, a senior manager with the London Ambulance Service who had driven us to ‘the Jungle’, were wearing wellies. But I noticed some of the refugees wearing trainers, crocs or flip flops.

The mud dominates life in the Jungle, a refugee camp that the French authorities do not recognise as such. On the day I visited, rain alternated with sunshine, the weather was mild for December but a strong wind created a chill and battered the tents where most live.

The Jungle sprawls out from under a motorway bridge just outside Calais, home to some 6,000 people at present. It is flanked by two chemical plants pumping out noxious-looking clouds, the source many believe of ‘Jungle lung’, the cough and sore throat most have had since arriving. The camp itself is on an old landfill site, waterlogged, full of junk, some just unsightly, some, like asbestos panels, dangerous.

Until very recently there was no sanitation, and three cold-water standpipes for everyone. Because the French Government regards this as a border control not a humanitarian issue, it would not provide facilities nor allow the UN or major charities like Oxfam to do so.

Instead there are smaller charities like Hands International, (who set up an immunisation clinic in October and have vaccinated 40% of residents against this year’s ‘flu strain), Medecins sans Frontieres and L’Auberge des Migrants, which supplies both clothes and wooden shelters for the most vulnerable.

MSF took the French Government to court and won. Now the Regional Government (which almost fell to the Front National this month) has been forced to provide heated tents for families and better sanitation and water supply, though while we saw this work in progress it looks unlikely to be ready by the planned date of 13 January, and will only house 1500 people.

The French state provides little by way of security nor humanitarian assistance in the camp. A 15- year-old boy was stabbed to death this month but there has been little evidence of an investigation into his death. Relief is provided by the volunteers.

Martin was introduced to the Jungle by an LAS colleague Sam Billoo, whose father founded Hands International in 1979 to bring help to isolated villages in Pakistan. He probably never thought their services would be needed in northern France, but Martin and Sam have recruited a number of LAS paramedics who give up their weekends and leave to provide essential medical care.

Meanwhile, the riot police sit in vans at entrances to the site or block these off. At least twice a week, I was told, tear gas is fired into the camp, usually to coincide with demonstrations by the Front National and other extreme right-wing groups who shout abuse at the refugees. From the camp it looks as though the police are there to protect the fascists.

It is difficult to describe either the appalling conditions in the camp or the positive spirit among the people who live there. Seeing both together is an incredible experience.

There are several hundred children without parents in the camp, some as young as 12 or 14. There are over 200 families. Most are from Syria, Afghanistan, Eritrea, Sudan or Kurdistan. All seem to be fleeing persecution, but without a proper asylum process it is difficult to tell.

They live in ragged tents or plywood huts (no substantial structures are allowed by the authorities). Often these are next to overflowing toilets or are permanently soaked in mud. There are a few cold standpipes for washing or cleaning. Cooking is over open fires next to the tents or on primus stoves, which is why fires are common. One recently wiped out a whole section of the camp, though fortunately there were only minor casualties.

But there is a church, a library, language classes, restaurants and shops in shacks and huts. There is the Good Chance Theatre and just outside the camp is the warehouse where donations of everything from clothes and toiletries to tents and sleeping bags are taken. Often people spontaneously drive over from the UK with a carload.

The generosity is appreciated but I would urge anyone planning to go, recently to email first to see what it needed and how to sort it. Wedding dresses and high-heeled shoes (really?) or extra-large clothes for the undernourished refugees may not fit the bill but some have been donated anyway. Last month Rev Bob Mayo and St Stephen’s Church in Uxbridge Road took a whole truckload of valuable supplies to the camp.

The generosity of spirit shown to us by the refugees was humbling. It is what keeps the volunteers coming back week after week or in some cases living here permanently.

But this is not a situation that should occur anywhere, let alone 30 miles from the UK. And it should be resolved by the French and other European governments, including our own. From what I saw and was told the treatment of refugees in the Jungle may breach the UN Convention of the Rights of the Child and fails to comply with the latest version of the Dublin Convention on the treatment of asylum seekers (Dublin III).

Many of the refugees would like to come to the UK, but that is because for many their nearest relatives are here. For families and children with such links we should provide an opportunity to apply for asylum without risking their lives stowing in lorries or jumping on trains.

Generally, given the treatment they have received from the French authorities, people in the Jungle are suspicious of them, but still some would like to apply for asylum in France, others in Germany or other EU countries.

Some may turn out to be economic migrants and not fleeing persecution. But at the moment no one is going anywhere. As winter proper approaches, pregnant women, young children without families and many people who would offer a great deal to host countries are living in intolerable conditions, ignored.

I met lawyers, engineers, and a former interpreter for UK forces in Afghanistan among the camp-dwellers.

This is not in truth a refugee camp, so much does it lack the basics of life. It is a stain on the French state, but it is not a problem of which we can wash our hands. The majority of the volunteers and donors are from the UK. That is to our country’s credit. Our Government has contributed nothing but the money to build a razor-wire fence between the camp and the Eurotunnel entrance. This is to their shame.

Please click through if you would like to find out more about our work. If you would like to know how you can help refugees, please check out our Get Involved section where you can find out how to fundraise for us and how to make a donation. Thank you!

Your ticket for the: Help Refugees’ Annie meets MP Andy Slaughter in the Jungle, Calais