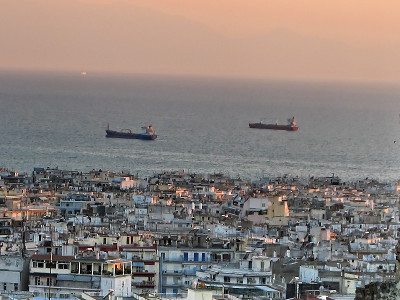 Amelia, one of the Help Refugees team, is currently visiting our partner projects in Greece. She has just spent time in the North, and has written about the trip – and our work in the region – below. Expect more updates from Athens and Lesvos soon!

Thessaloniki is a hub of activity. Not only is it a bustling city in its own right – the second-largest in Greece, with over a million inhabitants – but there is also a range of grassroots organisations, international NGOs and other stakeholders that work with refugees in the city and surrounding area. It is where Help Refugees has a warehouse, which has supplied camps and projects in the area since 2016, and where many of our partners are based.

The region has a long history of welcoming displaced people, and its geographic proximity to other states – Bulgaria and Macedonia to the north, and Turkey to the east – has ensured that it is placed firmly on migration and displacement routes. In recent years, it became a feature of the well-trodden path through Greece and onwards to Europe – but all that changed when the borders began to close, first in August 2015 and definitively in February 2016.

Tens of refugee camps, official and unofficial, were dotted around the area. This included the infamous Idomeni camp, where approximately 14, 000 asylum seekers were stranded at the Macedonian border (the camp was evacuated in May 2016), as well as now-closed official camps such as Softex and Cherso. Now, 11 camps remain in Northern Greece, but there has been a notable increase in urban accommodation.

The question of accommodation is complex, with specific and overlapping issues at national and local level. I will not go in to detail here – not least because I am still trying to get my own head round it! However, it should be noted that many organizations in Thessaloniki have dedicated capacity to helping newcomers navigate the convoluted system – or to filling the gaps that the official system leaves behind. Despite this work, a substantial number of refugees are homeless in the area – the majority of whom are single men, who do not meet the vulnerability criteria for urban accommodation and who have not been relocated to a camp.

My first morning was spent with Ingrid, Help Refugees’ Field Manager for Northern Greece, who has the most astounding knowledge of organisations in the city and the idiosyncrasies of the system. She was supporting two newly arrived families, who were currently in emergency accommodation (a hotel room, for three nights), to access formal accommodation (an apartment, for six months). Her support ranged from ensuring that they had food in their hotels (and arranging deliveries or taking it to those who did not), to explaining the process of securing accommodation and escorting them to appointments. UNHCR oversees the housing program, and a number of organisations refer vulnerable individuals and families to them. However, if emergency housing is at capacity or delays arise in families’ acceptance in to formal accommodation, grassroots groups – many of which are funded by Help Refugees – are called upon to secure alternative housing.

I was then lucky enough to see the work done by Refugee Trauma Initiative (RTI), an incredible HR-supported group providing psychosocial and therapeutic support to refugees and volunteers. They have specific programmes to respond to the needs of various groups, including an Early Childhood Care & Development (ECCD) session for children 0-6. It is hard to describe the session I observed without being overly hyperbolic – but it really was wonderful.

The session was facilitated by trained therapists, and engaged the children through both play and guided educational exercises. Parents were supportive figures – sometimes in the room and playing with their children, sometimes using the time to attend other appointments or sessions in the same building. The ECCD programme works, in part, on attachment between a parent and child – to alleviate their stress, and support the family unit. The environment created was light and fun, allowing children – whether or not their parents were present – to have quality interactions in a safe and supported place. It was a real joy to see.

I spent the afternoon with one of the founding members of Ethos, a grassroots association supported by Help Refugees. Ethos supports unaccompanied children as they turn 18, as they are no longer the responsibility of the Greek state. The organisation supports young people’s transition to an independent life in Greece, through accommodation programs, inclusion projects and the provision (in partnership with RTI) of psychosocial support. Ethos facilitates social activities that help young people to connect with the Greek population, and supports their access to education and vocational training. Furthermore, the organisation helps young people to navigate the legal system in Greece, to ensure that they receive papers and benefits such as UNHCR’s cash assistance programme (which minors are not eligible for). Once the young people have a stable income, either through cash or employment, they move to independent living and receive remote support from Ethos based on their needs. The organisation helps young people to not only see, but also realise, a future in Greece – combining hope with practical opportunity.

The shift towards long-term solutions, which fill both immediate and future gaps in the existing state or iNGO response, is a remarkable feature of Thessaloniki’s grassroots groups. This work necessarily fosters inclusion and solidarity, and helps to normalize the lives of displaced people in their new countries.

I hope that this post offers some insight to the projects that Help Refugees – through your generosity – is able to support, as well as the complexities faced by displaced people in Greece. I’ll be in Thessaloniki for a few more days, and then heading down to Athens and onwards to the islands, so expect more updates soon.

Since we funded 30 doctors to go to Lesvos in October 2015, Help Refugees has played a pivotal role the responding to the crisis in Greece. We welcome volunteers and donations, both of supplies and funds – because, as ever, our work depends on the generosity of people like you. Thank you.

Your ticket for the: Greece Diary: A Visit to Thessaloniki, Part 1