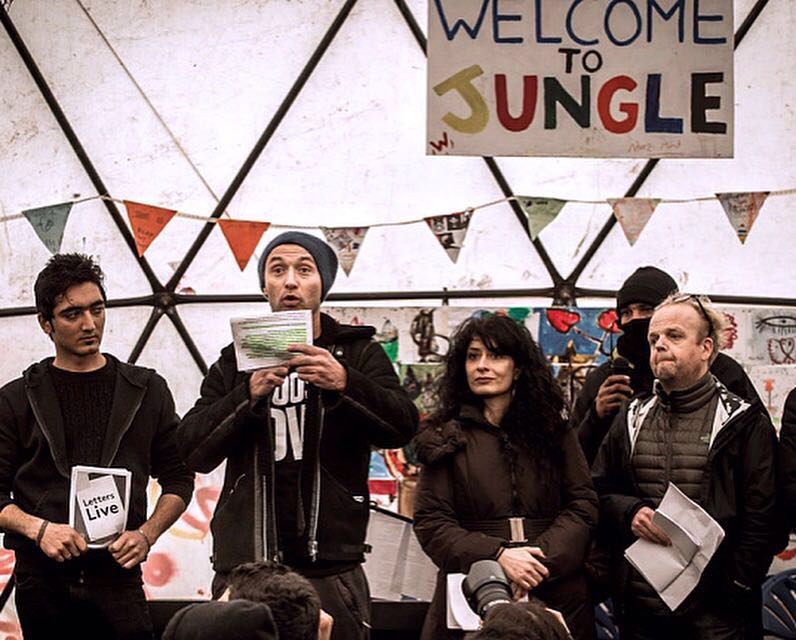 At 2pm on Sunday 21st February 2016, Jude Law, Juliet Stevenson, Tom Odell, Sir Tom Stoppard, Matt Berry, Shappi Khorsandi and Toby Jones alongside a number of displaced refugees, took to the stage to perform a one off Letters Live performance in association with Good Chance at the refugee camp in Calais, France. The performance was held in aid of Help Refugees, a humanitarian organisation providing much of the aid on the ground, and took place at Good Chance Theatre, a temporary theatre based in the Jungle which offers a varied programme of art, theatre and music events.

Ten letters from the renowned Letters Live series were staged alongside new writing penned and performed by refugees currently living in the jungle, read in English and translated into Arabic, Farsi, Pashtu and Kurdish. There was live music from the the camp’s most popular rappers and musicians, as well as Tom Odell, Maria Friedman and Adrian der Gregorian who rounded off the event.

The show included a reading of a the full letter to David Cameron which was delivered earlier this week (see details below) as well as Ghandi’s letter to Hitler ‘For the sake of humanity’ and ‘We Are Just Ordinary People’ a letter from a refugee to the people of Europe.

Juliet Stevenson read her heartfelt message to the refugees saying: “You have already made incredible journeys to get here, journeys that required strength and courage that we can only dream of possessing. I am so ashamed of the Europe that has refused you and of the politicians who have failed you. They do not speak for us. There is another Europe, which will fight on your behalf, and where you will always be welcome.”

Liz Clegg, a British volunteer who runs the makeshift Women and Children’s Centre in the camp read a letter to one of the young unaccompanied boys she cares for, telling him of her fears for him, adding “I can’t promise to solve this, but I am trying…I will fight to the bitter end to keep you safe”.

Performed to an audience of around 200 refugees the unique and unprecedented event was mounted two days before the proposed official eviction of more than 3500 people from the southern section of the Calais camp, which is being challenged by Help Refugees, L’Auberge des Migrants and several other organisations on the ground in the French courts, with a hearing set for Tuesday in Lille at 2pm.

Speaking of their experience,

Jude Law said: “It’s our responsibility as humans to look after our children. The children in the camp at Calais need us. It isn’t a big ask. It is simply the right thing to do.”

Taj, a Afghani refugee from the camp who performed at the event said: “We are not soldiers, we are not politicians, we are not terrorists. We are ordinary people who want to live a peaceful life. Please open your hearts and borders to us, and help to end the war.”

Sir Tom Stoppard and Sabrina Stoppard said: “An inspiring and humbling day, a wonderful day and we regret to say, shaming too.”

Tom Odell said: “Today was one of the most humbling and inspiring experiences of my life. Something needs to be done.”

Help Refugees said: “We are overwhelmed by the level of support from everyone coming together today in a show of solidarity to highlight the plight facing the refugees in Calais and Dunkirk. The bulldozing of the camp must be postponed until the children have adequate and safe alternatives, which are currently not on offer. We would like to thank Letters Live, all the British artists who performed, Good Chance, and most of all the refugees who took part in today.”

Joe Murphy and Joe Robertson of the Good Chance Theatre said: “Today was an example of the energy that can be produced if we work together. This is an unjust set of circumstances. Children should not live like this in any country of the world. We want this day to draw deserved attention to the situation these people find themselves in. It was a pleasure to work with Help Refugees, Citizens UK and Letters Live to achieve this moment.”

Earlier this week Letters Live, Help Refugees, Citizens UK and Good Chance delivered a letter to David Cameron calling for urgent action to delay the demolition of the southern part of the camp to allow time for intervention to ensure adequate protection of the camps refugee children. More than 110,000 people including over 150 public figures have now signed this letter.

Photo, left to right: Barbak (a refugee), Jude Law, Shappi Khorsandi and Toby Jones at the Good Chance theatre in the Calais Camp