Eritrea in Focus: What’s Going On In Africa’s “North Korea”? 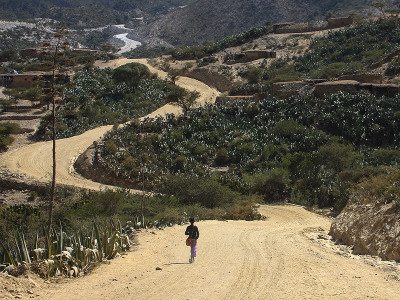 The exodus of Eritrean citizens fleeing from their homes is a story that has gone largely untold among the myriad tragedies of the current refugee crisis.

According to a UN estimate, 4,000 Eritreans are leaving their country each month. Many of these are making the dangerous journey, across borders and oceans, to Europe. Unlike many asylum seekers, however, Eritreans are fleeing not war but an authoritarian government that has all but eliminated civil liberties in the country. What are the government measures making so many to flee the country and what is the UK doing to help those reaching Europe?

A former Italian colony, Eritrea gained independence from Ethiopia in 1993 after 30 years of conflict. Isaias Afwerki, the leader of the victorious People’s Liberation Front, has ruled as president ever since.

Having rebranded his party the People’s Front for Democracy and Justice (PFDJ), Afwerki soon consolidated power and began eroding the post-independence hopes of democracy and civil freedoms in the country. He refused to implement the 1997 constitution or hold the elections it promised, sinking the nation into a state of oppressive totalitarianism. The UN has this year condemned the ‘unending, brutal human rights violations’ that the Eritrean state has subjected its people to, stating that they amount to ‘crimes against humanity.’

So, how has President Afwerki created an African equivalent to North Korea? Politically, the absence of an implemented constitution means that the PFDJ has been allowed to quash pluralism. Opposition parties are illegal and elections have never taken place since independence. Basic frameworks for the protection of civil liberties, such as rule of law and a fair justice system, do not exist.

In the absence of these legal protections, Eritrean citizens are vulnerable to the whims of the authoritarian state. Arbitrary arrest and unlawful killings are common, and it is estimated that thousands remain in indefinite detention without a legal process, including a group of 21 politicians and journalists who were jailed in an infamous crackdown in 2001.

The most notorious of the Afwerki’s brutal policies is the forced and indefinite military conscription that men between the ages of 15 and 50 must undertake. The president has kept the nation on a war footing as a result of the sporadic conflicts with Ethiopia that have arisen since independence, using this state of emergency to suppress the population into inescapable military commitments. Officers are given a shoot-to-kill licence to deal with deserters; Amnesty International reported one incident in which 11 were shot and killed after attempting to escape a military camp.

Eritrea was beaten to last place by North Korea this year on the World Press Freedom Index after eight years at the foot of the list. After a brutal clampdown in 2001, Eritrea became the only African country without a single privately owned news media organisation. A tiny proportion of the population have access to the Internet (just 1%), but even this is under the complete control of the government, who shut down all access in times of unrest. Unlike other developing African countries, the people of Eritrea have not benefitted from the growing availability of mobile phones, and have the lowest user rates in the world.

This strangulation of civil liberties has caused a mass exodus, with hundreds of thousands of citizens escaping the country in recent years. Defying the country’s restrictions on freedom of movement (which sees many detained or shot as they attempt to cross the border), Eritrean refugees can be found from neighbouring Ethiopia (where over 168,000 are currently) to Europe.

Despite its small population of around 5 million, Eritrea was the largest source of African asylum seekers entering Europe in 2015, with over 47,000 applying for asylum. This trend continued into 2016, in which some 40,000 travelled to Europe in search of asylum, with yet more individuals being hosted in precarious conditions in neighbouring countries.

Statistics from the Migration Policy Institute show that, while acceptance rates into the UK are generally high for Eritrean asylum seekers, inconsistencies and a lack of clarity in refugee policy regarding refugees from the Horn of Africa has led to many being unfairly denied entry and, in many cases, has caused individuals to be sent back to Eritrea. Though 2016 did see an improvement, the UK’s acceptance rate dropped to 47% during the height of the refugee crisis in 2015. Even then, a large proportion of accepted applications were only successful after appeals and multiple court hearings.

President Afwerki’s totalitarian rule in Eritrea is a crisis that cannot go unnoticed. Under his rule, Eritreans have no freedom of movement or expression, no system of justice, and they face the threats of murder, detainment, and indefinite military conscription. Eritreans continue to make up a significant proportion of asylum seekers both in the region and in Europe. That a country with such a small population is producing so many refugees demands recognition.

This piece was written for Help Refugees by Nick Jeyarajah, freelance journalist.

Help Refugees supports grassroots services and aid for refugees and displaced people across Europe and the Middle East. Our work depends on the generosity of people like you. Please, if you are able, donate here. Thank you.

Your ticket for the: Eritrea in Focus: What’s Going On In Africa’s “North Korea”?

Eritrea in Focus: What’s Going On In Africa’s “North Korea”?