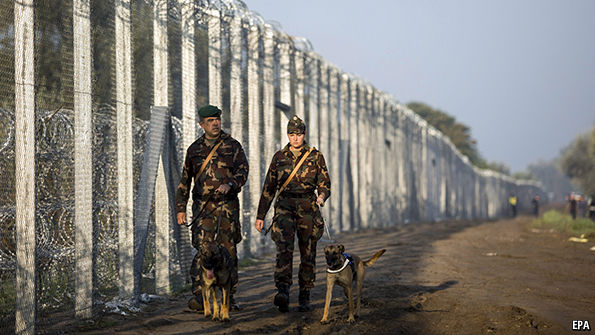 Elise Middleton, content writer for the Immigration Advice Service (IAS), writes about the criminalisation of rescue work at Europe’s borders and the lack of safe, legal routes for asylum seekers to the UK. IAS offers legal aid for asylum-seekers, trafficking survivors and survivors of domestic abuse.

War, the climate crisis, oppression and violations of human rights across the world consistently result in the displacement of people looking to escape life-threatening situations. Figures from the UN International Organisation for Migration estimating how many people will migrate as a result of the rapidly developing climate crisis range from 25 million to 1 billion by 2050, bringing the consequences of our own selfish greed directly to our front doors. The UK, alongside the other EU member states, has a moral and legal responsibility to hear their claims.

After the Libya migrant shipwrecks of April 2015, the EU established ‘Operation Sophia’. Described as part of the EU’s ‘response to the migration issue’ and with a mandate to reduce and prevent instances of international smuggling and trafficking, the operation began with a focus on cracking down on the trade yet ended up aiding victims and rescuing migrant boats in distress. The operation’s name was actually amended from EUNAVFOR MED in a touching move when 453 migrants were rescued including a Somali mother who subsequently gave birth to a baby girl who she called Sophia. The operation was changed to “honour the lives of the people [the EU was] saving”, but this now seems to be more performative than indicative of their intentions.

Despite these humanitarian origins, by 2017 Operation Sophia began to lose its focus. Italy’s parliament passed a law that wanted to penalise NGO boats attempting to rescue migrants in the Mediterranean, with a threat of fining the captains up to €1 million and the destruction of Libyan fishing boats. This also gave Matteo Salvini, the far-right Interior Minister, the ability to prevent migrant rescue boats docking in Italian ports.

Yet it is not just Italy that is cracking down on asylum seekers with an iron fist: the UK and EU have collaboratively designed new techniques and methods to essentially ensure refugees never reach the doors of sanctuary, even if it means the death toll increases.

The first initiative of this new strategy saw Operation Sophia close its rescue missions this March – although the EU did decide to open it again this September for another six months, but seemingly pointlessly so as it functions without any ships. Many critics such as the  EU Foreign Policy Chief, Federica Mogherini, have spoken out against the move as her spokeswoman declared that “Sophia is a maritime operation and it’s clear that without naval assets, the operation will not be able to effectively implement its mandate”. The UN similarly claims the Mediterranean risks becoming a ‘sea of blood’ as a result.

Alongside the sea restrictions, responses to the migrant crisis have also been met with militarised borders and technological advancements – supposedly to catch traffickers. Yet in a sadistic turn of events, naval vessels have been replaced with unmanned aerial vehicles which record devastating scenes of migrants struggling and potentially drowning instead.

The UK poured over £44 million into the drones alongside additional super-sensitive security scanners, the construction – and destruction – of Calais and Dunkirk camps and night vision technology goggles.

Not one single official rescue mission has taken place in the Mediterranean since August 2018, and the journey to the UK to try and claim asylum has become increasingly dangerous. Consequently since 2015, the number of people dying as they attempt to cross the Mediterranean has dramatically increased nine-fold while the Channel witnessed its first ever refugee drownings from August to October this year in which four people have so far lost their lives.

The fact that the UK and EU wish to diminish crossings – jeopardising lives in the process – is a serious cause for concern. Not only does it undermine basic humanitarian principles, but it has a drastic and terrifying impact on the lives of those who are merely exercising their international human right while traffickers gain even more margin to make profits since higher risks comes with a higher cost.

There are no planes to board when fleeing from a war-torn country. Slavery and torture victims similarly can’t flee easily, often escaping in a rush and out the backdoor to avoid unscrupulous officials. The decision to migrate is not one ever taken lightly and it is always in the hope of having a better qualify of life, to flee from human rights abuses and to raise children in a country free from violence. Asylum seekers are often leaving behind the only country they’ve ever known, including friends and family, and must travel for days – if not weeks – by foot, car, bus, train or however means necessary in their search for sanctuary.

Refugees arrive in Britain via dinghies and lorries in the absence of legal alternatives – and they are only following protocol in doing so since asylum claims can only be filed once physically in the UK. What’s more is that international law protects asylum seekers from being penalised for illegally entering; the way someone makes their way to the UK in pursuit of asylum has no bearing on the outcome of their case for asylum.

39 Vietnamese and Chinese citizens have recently been found dead in a refrigerator trailer in Essex, serving as a timely and tragic reminder of what happens when asylum seekers are both forced to take the most dangerous routes and put their lives in the hands of smugglers. Tra My, a Vietnamese woman named by a human rights group as one of the victims, reportedly texted her parents: “So sorry mum and dad. The route to abroad didn’t succeed. Mum. I love you and dad so much. I am dying because I can’t breathe.” This is irrefutable proof that placing more barriers in front of people looking for safety and survival outside of systems of oppression and countries savaged by war or poverty can only lead to more death.

Such horrendous loss of life that is tallying up could have been avoided if the member states were truly committed to preservation. Instead, the Home Office sees fit to funnel millions into prevention, building barriers, walls and traps to ensure migrants can’t arrive into the UK – or at least can’t arrive while they’re still alive.

Vulnerable individuals should not have to risk their lives just to have their story heard in the UK – which is their right. The UK must do more to protect refugees by implementing safe passages. Setting up a safe route or allowing asylum seekers to claim in juxtaposed ports abroad would rapidly reduce the death toll and the trafficking trade. It would also come at a far cheaper cost than scattering dangerous obstacles.

However, even if it were more expensive, there is surely no such higher priority than the preservation of life. Without serious revaluation into the UK asylum system and treatment of refugees, rigid immigration policies will continue to serve as a death sentence.

Your ticket for the: Drones and Dogs: The EU’s Pursuit of Refugees Undermines Basic Human Rights