‘One day I’ll confess my sins to the Lord’: French riot police admits to violence

A veteran CRS officer has revealed the extent of police violence towards refugees in northern France. The 40-year-old riot police officer – who wishes to remain anonymous – has worked in the ‘Jungles’ of Nord Pas de Calais for over 15 years.

Speaking to Haydée Sabéran from Ebdo Journal in France, the CRS officer said: “Oh, I have destroyed many encampments, I have emptied canisters of tear gas to contaminate people’s sleeping bags… In Calais I follow orders and I don’t think. … I [have] colleagues who set tents on fire so badly that the fire brigade had to be called.

“I’ve been going to Calais for fifteen years. I’ve known Sangatte, makeshift camps, the jungle, and today the post-jungle era. At the moment there are no actual shacks, only small tarps hidden as well as possible, because they know that if we find them we’ll kick them out. It’s not the CRS’s fault, it’s the system’s. We are asked to look busy, to evict people, to arrest them... I detach myself from the all of this. Maybe one day I’ll confess my sins to the Lord!”

He continued: “We could put 1,000 CRS here – but as long as England is over the border from Calais there will still be migrants here. Even without blankets and water. Politicians are trying to deter them from coming. But that’s not going to happen.”

These revelations raise questions about the £45 million the British government has this week promised to provide for French border security in Calais.

A Refugee Rights Data Project report, “Twelve Months On”, released in October last year, found that 91.8% of refugees in Calais had experienced police violence. Though charities working on the ground in Calais have reported the police brutality refugees face for years, this is the first time a CRS officer has gone on record to reveal the extent of the violence. 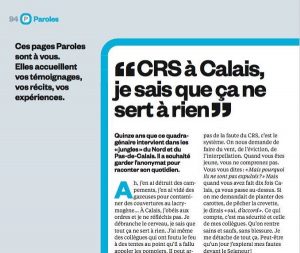 “The police brutality we have seen inflicted on refugees in Northern France needed no more confirmation than the tear gas burns on people’s faces, the broken bones and bruises, and blankets being stolen. However, while Macron is threatening to take charities exposing this to court for defamation, his own security forces have now admitted the violent treatment witnessed by aid workers, the Human Rights Ombudsman and Human Rights Watch.”

“The police come and take our sleeping bag or tent, and crush, I mean rip, our tent. They use some blade and they spray inside. We don’t talk with them… We can’t because our condition is very bad. We didn’t talk with them because our eyes, our mouth, they all is spray.”

*These names have been changed.

You can read the full transcript below:

‘Being a CRS officer in Calais, I know it’s a useless job’

For fifteen years this forty year old has been intervening in the ‘jungles’ of the North of France and the Nord Pas de Calais area. He wishes to remain anonymous to recount his everyday life.

Oh, I have destroyed many encampments, I have emptied canisters of tear gas to contaminate blankets. In Calais I follow orders and I don’t think. I unplug my brain, I know that all of this is useless. I even have colleagues who set tents on fire so badly that the fire brigade had to be called. Sometimes a police officer loses control because he’s tired, exasperated or for lack of experience. I have hot-headed colleagues who don’t think like me: ‘Let it go man, don’t worry about it. It’s not because you’re going to gas more migrants, beat up a migrant or steal their covers that’s it’s going to change the world.’

I’ve been going to Calais for fifteen years. I’ve known Sangatte, makeshift camps, the jungle, and today the post-jungle era. At the moment there are no actual shacks, only small tarps hidden as well as possible, because they know that if we find them we’ll kick them out. It’s not the CRS’s fault, it’s the system’s. We are asked to look busy, to evict people, to arrest them. When you are young you don’t understand: you ask yourself ‘Why aren’t they being deported? But once you’ve been to Calais ten times, all of this starts to go right over your head. If someone asked me to plant carrots, or go shrimp fishing I would say ‘yes, sure’. What’s important is my security and that of my colleagues. That we come home at the end of the day, safe and sound and without any injuries. I detach myself from the all of this. Maybe one day I’ll confess my sins to the Lord!

All of this is very expensive, it costs us millions. For example, every time we come here on a mission, we stay in family resorts or hotels for a month. But when we need more people on the ground, like during the dismantling of the jungle in 2016, some of us had to sleep at a hotel at the Bay of the Somme – an hour and a half drive from Calais. I wonder if you understand just how mad this all is. 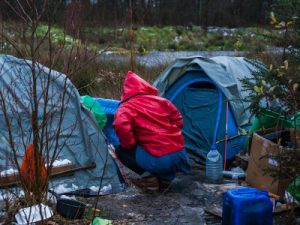 Living conditions are worse than ever before in Calais

Migrants keep coming to Calais to try and cross into England. While this is happening, the port and the Eurotunnel are becoming harder and harder to access. I have visited the security control installations at the port – it’s like Star Trek up there. First of all, there’s a visual inspection carried out by lorry specialists able to detect secret compartments and false floors. Then there’s a CO2 detector to check whether anyone is breathing, and then there’s the scanner, a big machine that takes some sort of x-ray of the truck. It’s an insane system from start to finish. They also have a heartbeat detector: they put what look like battery jump-starters on two parts of the lorry, and see the results on their screen straight away. They asked me to test it by stepping into the truck, and straight away I could see my heartbeats appearing on the screen. All around the area there are cameras, there’s barbed wire and security patrols. It’s a perpetual race to top security. One thing’s for sure – this generates jobs alright! But because it is harder and harder to cross, ‘jobs’ are created for other people as well.  People from Calais are getting involved in mafia systems. Fishermen and people on tourist ships too are crossing that line.

When migrants try to stop trucks by putting tree branches, trollies, tyres, and blocs of cement on the road, or by throwing rocks at windshields, we chase them with tear gas grenades. We use night-vision goggles and try to keep the migrants as far away from us as possible. When we’re outnumbered we don’t leave the vehicle, we just throw the gas from our windows. The migrants are determined, in a state of ultimate distress, but 90% of the time they move on without us needing to force them to. We do need to be on our guard though.

Some smugglers take extreme risks because of the high sums of money at stake. Early January, one of them charged a CRS group with his car at full speed. He got two years in jail.

If we had a Prime Minister who had the balls, we would tell the English: ‘we’ll tear your le Touquet treaty to shreds, deal with the migrants in Dover for all we care’. We are meant to be watching the border, which means dealing with people coming in – not with those trying to get out! Now, we are preventing illegal migrants from leaving France. At one time I was really mad about it, and would tell people ‘I work for England’. Now I don’t feel anything about it really. We could put 1000 CRS here – but as long as the land of England is over the border from Calais there will still be migrants here. Even without blankets and water. Politicians are trying to deter them from coming, but that’s not going to happen. Maybe it’d disgust someone unconvinced and undetermined – but it won’t deter these people. They are coming from war-torn countries, from dictatorships, from countries with big economic or climate change issues. They left their families behind, walked for thousands of kilometres in difficult conditions, and have been left in the hands of the mafia. I tell myself, if tomorrow France was at war and I had to leave for Afghanistan… If someone told me ‘Kandahar is a pretty nice place apparently,’ and I had to hit the road, I would be scared shitless! Having to cross borders, walk for months, cross seas and sit in jails…

But let me tell you, I have a harsh vision of all of this. If war broke out in France I would stay and fight, even with my family here. I have empathy for the migrants because of the travel conditions, that’s true, but at the end of the day I don’t have a lot of respect for them. I think they are cowards who refuse to die for their country. I have never had a conversation with a migrant. It’s been years since I’ve seen one from less than ten meters away.

***
Testimony written down by Haydée Sabéran.

The full article is available in ebdo, and is not yet available online.

Your ticket for the: ‘One day I’ll confess my sins to the Lord’: French riot police admits to violence

‘One day I’ll confess my sins to the Lord’: French riot police admits to violence