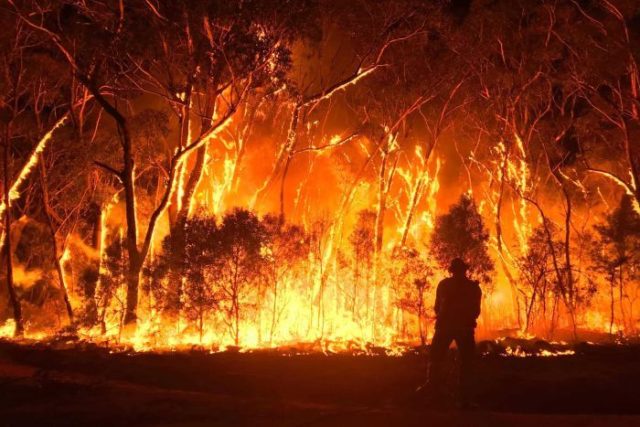 Harry Sanders is a content writer for the Immigration Advice Service, an organisation of immigration lawyers providing free advice and support to asylum seekers and victims of abuse.

As the new decade dawned roughly one month ago, humanity collectively breathed a sigh of relief, hoping at least for some small respite from the global mania of the 2010s. Within a few days, such hopes were quickly shattered by an onslaught of disasters – amongst which are the Australian bushfires which are still raging at the time of writing. The environmental impact of such widespread destruction is unquestionable (it is believed that around one billion animals have died in the fires), but in contrast with the flurry of wildlife appeals, the matter of human displacement has flown – relatively speaking – under the radar.

The bushfires presently wreaking havoc across Australia follow the country’s hottest year on record in 2019, with average temperatures 1.52C above the 1961-1990 average. Forgetting the views of the most hard-line of sceptics, this huge rise in temperature is the result of climate change caused by humans and our greenhouse gas emissions. Since the fires began, over 2,000 homes have been destroyed in the south of the country, and their former inhabitants have been made the first ‘climate refugees’ of the 2020s.

Regrettably, though, Australia is not the first to experience climate-induced displacement. Since 2008, an average of 25.3 million people have been forcibly displaced due to environmental disasters every year. It is crucial to reinforce that these affected people are not simply joining family or taking up employment abroad; they have been forced to leave their homes by a change in circumstances that are in no way their choice or their fault. Thankfully, the UN has recently made it unlawful for climate refugees to be returned to their home country if this would leave them at risk from a climate disaster.

The communities hit hardest by these disasters are, unjustly yet unsurprisingly, the poorest and most rural. A recent IPCC report found that indigenous and disadvantaged populations are at a disproportionately higher risk from global warming of 1.5C and over. Agricultural and coastal populations – which are fundamentally dependent on a stable environment for their way of life – are destined to struggle with the rising unpredictability of our global climate. In fact, it is expected that by 2050 a gargantuan 143 million people from sub-Saharan Africa, South Asia and Latin America will be displaced.

The present is morbid; the future, even more so. We have known this for so long that it is included in the national curriculum. However, it is still unclear what is actually being done to prevent this future of hellfire and brimstone from materialising.

In reality, very little is being done for one plain and simple reason: to act on climate change is not in the best interests of anyone who benefits from our global capitalist and consumerist economy.

The biggest culprit is undeniably the fossil fuel industry, with its regard for the future wellbeing of the planet and its colourful tapestry of peoples and cultures always coming second to profit. A now infamous statistic often floated in discussions on climate change is that just 100 companies are responsible for more than 70% of the world’s greenhouse gas emissions since 1988. For example, Shell – a household name – is just one of these companies, and alone is responsible for 1.7% of global emissions for the last 30 years.

Companies dealing in fossil fuels such as Shell quite literally get away with murder, thanks to the greed and carelessness of the politicians which protect them. Australia has one of the worst records in this department due to its status as the world’s fourth largest coal producer, and largest exporter of both coal and liquefied natural gas.

As a result, Australia’s fossil fuel interests are protected by politicians and lobbyists who stand to profit from continued coal and gas production. Prime Minister Scott Morrison is one of many politicians who deny Australia’s involvement in global emissions in order to maintain profit margins. In the wake of the recent bushfires, Mr Morrison claimed that Australia is doing enough to limit its emissions.

Mr Morrison’s apparent heartlessness in the face of immense death and destruction sweeping his country should not be surprising, as he was also one of the architects of Australia’s troubled and brutal immigration policies. Since 2013, refugees arriving to Australia by boat have been intercepted and sent to detention centres on Nauru and Papua New Guinea where they wait to be processed amidst myriad human rights abuses. Ironically, both Nauru and Papua New Guinea are islands ‘at risk’ from potential environmental disaster.

In this new decade, the governments of not only Australia but of all nations face a choice of monumental importance. Will politicians continue to pander to the profit-driven robots of the fossil fuel industry, and in doing so ensure the continued escalation of the global climate disaster and the eventual displacement and death of millions globally? Or perhaps, for once, will thought be given to reason and humanity over zeroes in bank accounts?

Your ticket for the: ‘Climate Refugees’, Capitalism and the Australian Bushfires