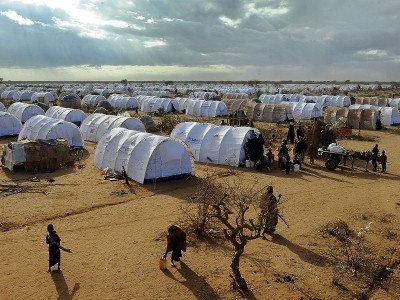 Over the next decade, climate change will force tens of millions of people from their home, creating the biggest refugee crisis the world has seen.

A new report released by the Environmental Justice Foundation (EJF) highlights the devastating impact that changing weather patterns will have on communities, most particularly in developing countries. Published a week before the UN’s current conference on climate change, COP23, it calls upon governments to create a multilateral agreement that will protect and give status to those displaced by extreme weather.

“If Europe thinks they have a problem with migration today … wait 20 years,” said Brigadier General Stephen Cheney, a retired member of the US Marine Corps. “See what happens when climate change drives people out of Africa – the Sahel [sub-Saharan area] especially – and we’re talking now not just one or two million, but 10 or 20 [million]. They are not going to south Africa, they are going across the Mediterranean.”

Despite being least responsible for climate change, the world’s poor are the most vulnerable to its effects – and are already suffering. Since 2008, an average of 21.7 million people have been displaced each year by extreme weather-related disasters – the equivalent of 41 people every minute. This does not include the people forced to flee their homes as a consequence of slow-onset environmental degradation, such as droughts.

The report argues, for example, that climate-related migration had significant impact on urban-rural dynamics in the months and years preceding the Syrian conflct. Over a million people left their homes and relocated to urban centres such as Homs and Damascus, following a prolonged and severe drought. The lack of water caused an estimated 75 percent of Syria’s farms to fail, and in some regions, farmers lost 80 percent of their livestock between 2006 and 2011. Nobody would argue that drought was the most significant factor in sparking the conflict; however, the report claim that its impacts (including changed demographics, water scarcity and food insecurity) interacted with and inflamed pre-existing political tensions.

Climate change is increasingly recognized as a cause of, or contributing factor towards, internal and international involuntary migration. Steve Trent, the executive director of EJF, argues that “climate change is the unpredictable ingredient that, when added to existing social, economic and political tensions, has the potential to ignite violence and conflict with disastrous consequences.”

The EJF’s report calls for the creation of a specific, legally binding and multilateral framework that protects present and future climate refugees. While climate-related migration has not been a discursive priority at COP23, the European Parliament adopted a Resolution in early October that explicitly recognizes the intersection between climate, conflict and displacement.

It “acknowledges the many difficulties involved in establishing an accepted universal definition of ‘climate refugee’, but calls for serious recognition of the nature and extent of climate-induced displacement and migration resulting from disasters caused by global warming,” and “recalls in particular that climate-related developments in parts of Africa and the Middle East could contribute to political instability, economic hardship and an escalation of the refugee crisis in the Mediterranean.”

Yet resolutions and recognition can only be the first step. Legal frameworks, technical assistance and capacity building are fundamental prerequisites to the protection of people displaced by climate change.

“Climate change will not wait,” said the report. “Neither can we. For climate refugees, tomorrow is too late.”

Help Refugees supports 70 grassroots projects across 10 different countries, supporting people who have been displaced both internally and internationally. As winter approaches, needs are only increasing. Please, if you are able to donate, do so here. Our work depends on the generosity of people like you.