Child refugees should be allowed to reunite with their families, say campaigners 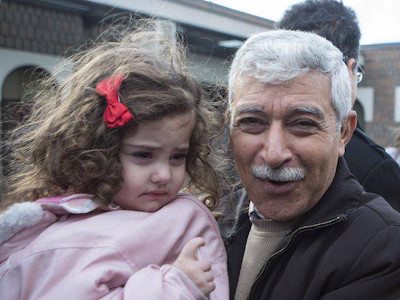 Last week, a campaign was launched by five organisations – UNHCR-UK, the British Red Cross, the Refugee Council, Oxfam and Amnesty – that hopes to expand and improve the framework for refugee family reunion. Help Refugees supports their campaign, and in this article, we will explain their first ask: for unaccompanied child refugees, who are already in the UK, to be granted the right to sponsor their families’ safe passage to the UK.

Unaccompanied child refugees in the UK have, under the present refugee family reunion* rules, no right to be reunited with even their closest family members. The denial of this right makes the UK an outlier in Europe – it is one of just two countries who do not allow applications for reunion from children – as well as setting children apart from adults, in their right to live safely with their family members.

There are numerous, intuitive reasons to suggest that the welfare and safety of unaccompanied children would be improved by the arrival of their family. Many of these vulnerable young people have experienced unimaginable trauma, both in their country of origin and during their journey to the UK. They are then faced with the difficulties of navigating a complex asylum system and accessing appropriate support, without the support of people that they know and love around them. Allowing children to sponsor their families’ safe passage is a straightforward change, but one that could have a transformational impact on their lives.

This campaign calls for children with refugee status or humanitarian protection to be able to sponsor their parents and siblings under the age of 18.

The UK’s position, as compared to the rest of Europe

Giving the right to a child refugee to have his or her family join them is neither new nor radical. Article 10 of the EU Directive on Family Reunion asserts that unaccompanied child refugees are entitled to be reunited with their family members; however, the UK did not opt-in to this clause. It should be noted that while Ireland also opted-out of the directive, it has since enshrined – in domestic law – the right of unaccompanied children to act as sponsors to be reunited with their family members.

Consequently, of the 28 European Union countries, only Denmark and the United Kingdom do not allow applications for reunion from unaccompanied children.

Both the UN Committee on the Rights of the Child and the UN Human Rights Council, have urged the UK to “review its asylum policy, in order to facilitate family reunion for unaccompanied and separated refugee children.” That the UK is out of step with the rest of Europe, as well as flouting the recommendations of UN agencies, suggests that our current immigration rules require review.

Children’s rights to reunion, as compared with adults

Adult refugees have a right – albeit limited – to reunite with their family members, through sponsorship of their safe passage to the UK. The rules explicitly provide for reunion with spouses/partners and dependent children, though discretionary powers exist to facilitate reunion with other family members. Unaccompanied child refugees, by contrast, have no access to family reunion procedures.

A range of international resolutions and guidance documents emphasise the acute vulnerability of unaccompanied and separated children, the ongoing trauma of separation, and the primary importance of the family as a unit for emotional (as well as economic) support. All of these factors provide context and reason for family reunification, particularly for children.

“It seems to us perverse that children who have been granted refugee status in the UK are not then allowed to bring their close family to join them in the same way as an adult would be able to do. The right to live safely with family should apply to child refugees just as it does to adults”.

In response to previous calls for children to be granted this right, the government has responded with various iterations of the “pull factor” theory. This includes a letter from Lord Bates, in which he asserts that permitting refugee children to sponsor their immediate families’ requests for reunion, “could result in children being encouraged, or even forced, to leave existing family units in their country and risk hazardous journeys to the UK in order to act as sponsors”.

However, no evidence has been provided to substantiate this claim. Professor Ian Goldin, head of the Oxford Martin School of Global Challenges, said in an email to Baroness Sheehan that “there is no credible evidence for the Government’s claim on pull factors.”

Moreover, the EU Home Affairs Sub-Committee published a report in July 2016 that says “we received no evidence of families sending children as ‘anchors’ following the implementation of the Family Reunification Directive by other Member States.”

The government’s response, therefore, seems to be based on conjecture rather than evidence.

Granting children the right to sponsor their families is no radical step. In fact, it is one that would align the UK with international standards.

On 16th March 2018, the Family Reunion Bill will be debated in the House of Commons. If you believe that children, like adults, deserve the right to live safely with their family, please contact your MP and ask them to save the date and attend on your behalf. You can do this in just a few moments, using the Refugee Council website – after typing in your postcode, you will see who your local MP is, and you will also have a draft of the letter ready to send.

It will take less than 5 minutes to send, but could make a huge change in the lives of unaccompanied children who wish to reunite with their loved ones. Thank you.

* Refugee family reunion applies to family members outside of Europe. Another route to reunification is the Dublin Regulation, the European-wide immigration framework that decides which country within Europe should be responsible for individuals’ asylum claims – but family members must already be in Europe to benefit from this.

Your ticket for the: Child refugees should be allowed to reunite with their families, say campaigners

Child refugees should be allowed to reunite with their families, say campaigners