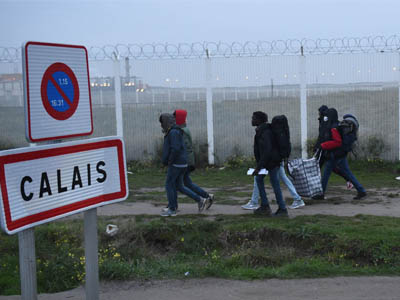 Meron is a child refugee. He left home when he was only twelve years old and travelled from Eritrea in 2015 to Libya, then to Italy for 5 months.

He kept trying to reach France from Italy but every time he’d cross the border, the police would send him back the way he came. Finally, after many months of trying, he reached Paris where he spent a month living on the street.

He went to Calais for a few weeks and then on to another little camp some 60km from Calais. There he sleeps in a tent in the woods with his friend Abel. He tries to get to the UK with his friend Abel – they both run for the trucks when they stop. One time when he was with Abel and trying to get into a truck, he was sprayed in the face with pepper spray by a man. Another time he was caught by the truck driver who tried to beat him. “To go to the UK is very hard.” “My aim is first to see my brother.”

Meron’s brother is in the UK

Meron’s older brother left Eritrea for the UK some three years ago and he now has papers. His father has been in the military for as long as he can remember – he was conscripted indefnitely. The last time he spoke with his mother was when he was in Italy. He hasn’t heard from her for many months.

A local church near the camp has opened a safe-house for refugees and young people where they can cook for themselves, wash themselves and relax. He hangs out there sometimes, so that he can eat cooked meals and use the shower. Out back is a garden with an outdoors BBQ and a big garden tent. It’s a busy space, but while he’s there at least he’s out of the camp. Some of the women at the safe-house point out how young Meron is and look worried.

Meron is really small and quiet, but he smiles a little every now and then. He talks about wanting to get a good education and that he was good at mathematics at school. He seems unsure who he can trust. I ask him how he feels now. “I feel tired. Really tired.”

To help us help Meron, and more child refugees desperately in need of support, please donate to support our work here.

Your ticket for the: CHILD REFUGEES IN CALAIS: MERON’S STORY