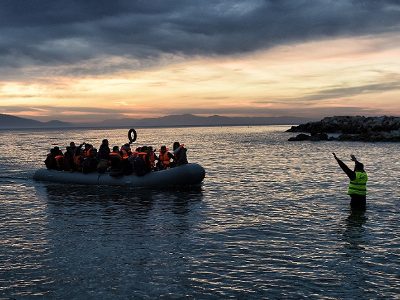 A new report, released by UNHCR in late November, has documented significant changes in the routes used by refugees and migrants to reach Europe during the third quarter of this year.

“Over the past months, the sea route to Greece has gained more traction, sea arrivals to Italy have reduced and we have seen migrants and refugees using increasingly diversified journeys to reach Europe,” said Pascale Moreau, Director of UNHCR’s Europe Bureau.

The report notes a decrease in the number of people crossing to Italy from Libya: in fact, arrivals between July and September were the lowest number for this period since 2013. Such a drop was expected, as European states – in collaboration with the Libyan coastguard – have made concerted efforts to reduce the number of crossings.
However, this reduction in numbers should not be held as evidence of successful policies. In fact, European leaders’ collaboration with the coastguard has led to accusations of complicity in the wide range of human rights abuses that are taking place on Libyan soil.

Greece has witnessed a rise in sea and land arrivals since the summer, and the arrival of boats to the islands continues unabated. 83% of people arriving to the Greek islands over the past three months are from Syria, Iraq and Afghanistan. The vast majority have been arriving as families: more than 50% are women and children, of which 10-15% are unaccompanied children.

These children add to over 15, 200 unaccompanied and separated children who have arrived in Europe this year – so far.

In Greece, almost 200 unaccompanied children have been added to the waiting list for shelter over the past month. During the same time period, just 22 extra spaces have been found. As a result, 2,201 children are currently waiting for formal shelter. They wait in camps, reception centres, safe zones (within camps), protective custody (within police stations) and detention centres – or live on the streets.

It should also be noted that other routes to Europe are in use. The Black Sea crossing, from Turkey to Romania, was used by 476 people – all from Iran and Iraq – in August and September. In addition to those who reached Romania, over 900 others attempted to cross and were intercepted by the Turkish Coast Guard.

This route is no less dangerous than the others. The report notes that ‘on 22 September, 24 people are believed to have drowned and another 14 were missing when their boat capsized off the Turkish coast en route to Romania. This is believed to be the biggest loss of life along this route since November 2014 when a boat capsized near Istanbul.’

The report also notes that forward movement has continued from the country of first arrival, and that at least 38 people have lost their lives while attempting to move onwards.

There have also been continued reports of push-backs from several countries, corroborated by a report from MSF that focuses on the Balkan Route. These practices should be investigated and eliminated.

Arrivals to Europe are continuing, and so is the needless loss of life caused by a lack of safe and legal routes. UNHCR’s report paints a bleak picture of the perils faced by those seeking safety, and makes clear that political reforms – both in terms of routes, and support offered to refugees and host countries in Europe – are urgently required.

Help Refugees supports grassroots projects across Europe and the Middle East, and provides frontline support to refugees arriving in both Greece and Italy. With winter approaching, needs are only increasing. If you are able to, please donate here.

Your ticket for the: UNHCR report finds changes to the perilous European entry routes used by refugees and migrants