Calais Update: another death at the border, an end to the “winter truce,” and a new asylum system for France 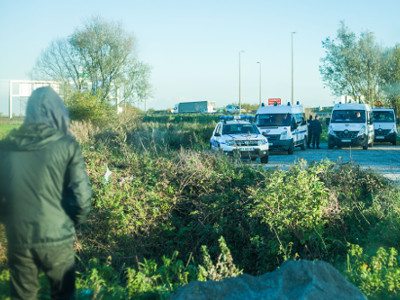 The situation in Northern France remains acute, following the end of the so-called “Winter Truce” and the destruction of people’s possessions and shelters. The community is mourning the loss of another young man’s life, who was critically injured in an incident on the port bypass. Our partners at the Refugee Info Bus write with the latest news from the ground.

Another Death at the Calais border

A young man has died following an incident on the port bypass in Calais on Friday 23rd March, 2018. He was hospitalised and placed in a medical coma in Lille. He passed away from his injuries on Wednesday 28th March, 2018.

He was born in Eritrea in 1996, although other sources have already incorrectly reported that he was 16. Details of the incident itself are unknown, but it is yet another unnecessary death in Calais which has been caused by the risks that individuals take in attempting to cross the border. The lack of safe and legal passage for people trying to reach the UK has led to over 200 deaths since 1999, according to L’Auberge des Migrants. Trade continues on unhindered as yet another young man fights for his life at the roadside.

European citizens can cross the English Channel quickly and with ease, and yet this is a privilege not afforded to our non-European friends, leading people to take dangerous and, as we have seen far too many times, sometimes fatal risks. People would not put themselves at the mercy of smuggler gangs in Libya, risk their lives crossing the Mediterranean Sea in sinking boats or try to reach safety in refrigerated trucks if it wasn’t seemingly better than what they left behind.

Eritrea is a country in turmoil, and has been described as Africa’s North Korea. Despite only having a population of 5 million people, it has generated one of the world’s largest refugee populations, according to Meron Estefanos, an Eritrean journalist and activist who writes on the situation in Eritrea and of Eritreans around the world.  In March 2018, the UN Human Rights Council held a dialogue on human rights abuses in Eritrea, which details that “in 2016, the Commission of Inquiry on Eritrea had found reasonable grounds to believe that crimes against humanity, namely, enslavement, imprisonment, enforced disappearances, torture and persecution had been committed since 1991”.

Of all the atrocities taking place in Eritrea, be it against dissident politicians, independent media professionals, religious leaders and community elders, it is the plight of the youth that is the most harrowing. Meron Estefanos, 2018

Calais: The Truce is Over

In Calais, the so-called “Winter Truce” has ended on April 1st, 2018. This means that the sporadic emergency shelters opened over the winter months on particularly cold nights will no longer be opened, and that the 700+ refugees sleeping rough in Calais are condemned to the streets and the woods. However, even while the “Truce” was in place, shelters were opened sporadically, were run poorly, and only housed a fraction of the refugee community in Calais. Despite Macron’s promises that there would be no people sleeping on the streets by Christmas, the shelters were not even open on Christmas Day, and hundreds of refugees in Calais have not spent even a single night inside over winter.

In Dunkirk, the state opened an emergency accommodation centre for the entirety of winter — a gym which accommodates around 200 people. The gym will temporarily stay open past the April 1st cut-off date, which is good news for those already inside. However, for new arrivals to the area, or for those who did not manage to get a place inside over winter, sleeping outside remains the only option. Many people, including women and young children, are sleeping in the street outside the gymnasium, denied entry to the warm and dry accommodation behind guarded doors.

The CRS (French riot police) continued their dismantlement operations across the city last week, culminating in an eviction of the camp at Rue des Verrotiéres. Over 40 police officers and employees of the local authorities removed and destroyed what little shelter the communities living there had established in the preceding week, including a large tent that had served as a makeshift mosque.

The dismantlement took place at the same time as the state-funded food distributions located nearby, meaning that a number of the people we support had left their belongings in order to eat breakfast, only to find all of their belongings had been confiscated upon return. To quote the prescient words of an Eritrean minor, issued at the outset of the state-funded food distributions: “that government gives us food with one hand, and takes our tents with the other”.

Even more worryingly, we have heard numerous reports that the Police aux Frontiéres arrived just minutes before the onset of the dismantlement, detaining up to 20 people, the vast majority of whom were released from the detention centre immediately, forced to return to their living area by foot, a journey which takes several hours.

Volunteers at the L’Auberge des Migrants/Help Refugees warehouse responded, as we do following every dismantlement, by distributing tents and bedding to those without shelter, in spite of the police summons issued to four volunteers the previous week for replacing confiscated tents.

A New Asylum System in France

According to InfoMigrants, a new system of asylum is to begin in France in May 2018. People seeking asylum in the Paris region will have to begin the process by calling a telephone helpline run by OFII. The only languages available will be English, French and Arabic. The move is in order to reduce the number of people turning up at Padas (“platform for asylum seekers”) which cannot cope with the current number of requests.

However, France Terre d’Asile, the organisation which runs Padas in Paris, claims that the hotline is too complicated for people trying to claim asylum.

“This doesn’t make things simpler,” says director Pierre Henry. “I don’t think that this helpline is a good model for helping asylum seekers access their rights. I fear that at least some migrants will struggle to understand this service”.

This article was prepared by our partners, Refugee Info Bus, and originally published on Medium.

Your ticket for the: Calais Update: another death at the border, an end to the “winter truce,” and a new asylum system for France

Calais Update: another death at the border, an end to the “winter truce,” and a new asylum system for France