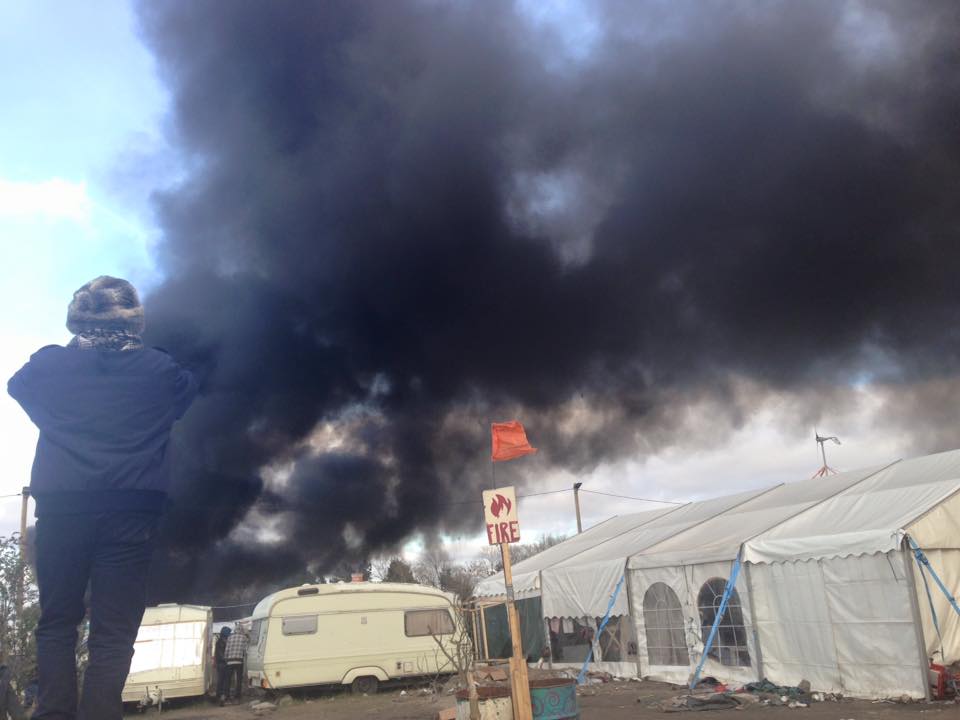 Today in the Calais camp hundreds of riot police were present, carrying guns and detonating tear gas canisters which affected men, women, children (and BBC journalists), some which caused fires to start all across camp.

Many refugees who had come to France to escape genuine war zones lost their belongings and homes again today.

The morning began with 55 CRS vans pulling up and unloading hundreds of riot police. Bulldozers and water cannons were lined up outside camp and teams from the Prefecture began to systematically destroy shelters using mallets and chainsaws.

The police formed a human shield preventing refugees from collecting their valuables and used tear gas to repeatedly drive back residents as they dismantled occupied and unoccupied homes. More tear gas was used to force additional residents to evacuate their homes and the structures were then torn down preventing them from being able to gather their personal affairs.

Our teams on the ground spent their time grabbing fire extinguishers to contain the burning shelters and washing the eyes of children caught in the tear gas, as well as trying to hand emergency supplies to refugees leaving the camp, many confused as to where to go.

It was confirmed in French court last week that despite Help Refugees census finding 3,455 people there are only 1156 alternative accommodation places currently available in Calais and throughout Frances, leaving a deficit of around 2,299

The French government have not since informed us that they have found more spaces, to accommodate the total number of people they are evicting from the Southern part of the camp.

In a press conference last week the Prefect assured journalists that the dismantling of the Southern section of the ‘jungle’ would be gradual, humane and respectful of the dignity of the people living in the camp. The Minister of the Interior, Bernard Cazenove reiterated this insisting the approach would be humanitarian. The lawyer from the Prefecture at the hearing last Tuesday said that the two key reasons for evacuating the Jungle were for 1) the dignity of refugees and 2) their security. The scenes of panic we witnessed today were a far cry from these principals.

The wellbeing of each and every one of the residents of the camp continues to be our main priority but of course, at this distressing time and as night falls we are especially concerned for the 423 unaccompanied children living in the Jungle.

In the course of the confusion and panic sweeping through the camp after the events of today we fear that these vulnerable young people will scatter leaving them without the basic primary care our network of volunteers gives them and adding them to the 10,000 child refugees already ‘missing’ in Europe according to Europol. Many of these children have family members is the UK.

We call on this situation in France to be declared an official humanitarian crisis so that experts can come to assist and that already traumatised people are offered responsible care rather than additional trauma.

We also call on the British and French governments to expedite the Dublin III process allowing those unaccompanied refugee children in Calais with immediate family in the UK to come to Britain to reunite with them.

Your ticket for the: Calais statement – promises broken, destruction begins