“The government gives us food with one hand, and takes our tents with the other.”

These powerful words were issued by a 17 year-old boy from Eritrea, as we stood in a muddy forest in Calais, northern France. He is one of roughly 150–200 Eritreans sleeping without fixed shelter in the port town at the moment, and one of approximately one thousand displaced people currently in the same situation in the region of Nord-Pas-de-Calais.

Since the demolition of the ‘Jungle’ camp in October 2016, the provision of hot, nutritious meals to refugees in Calais has been left almost exclusively to volunteers working with Refugee Community Kitchen (RCK) and Utopia 56. From Tuesday 6th of March, the state began to contract La Vie Active to provide daily meals for those sleeping rough around the port town. La Vie Active in the current context had no experience of distributing food. 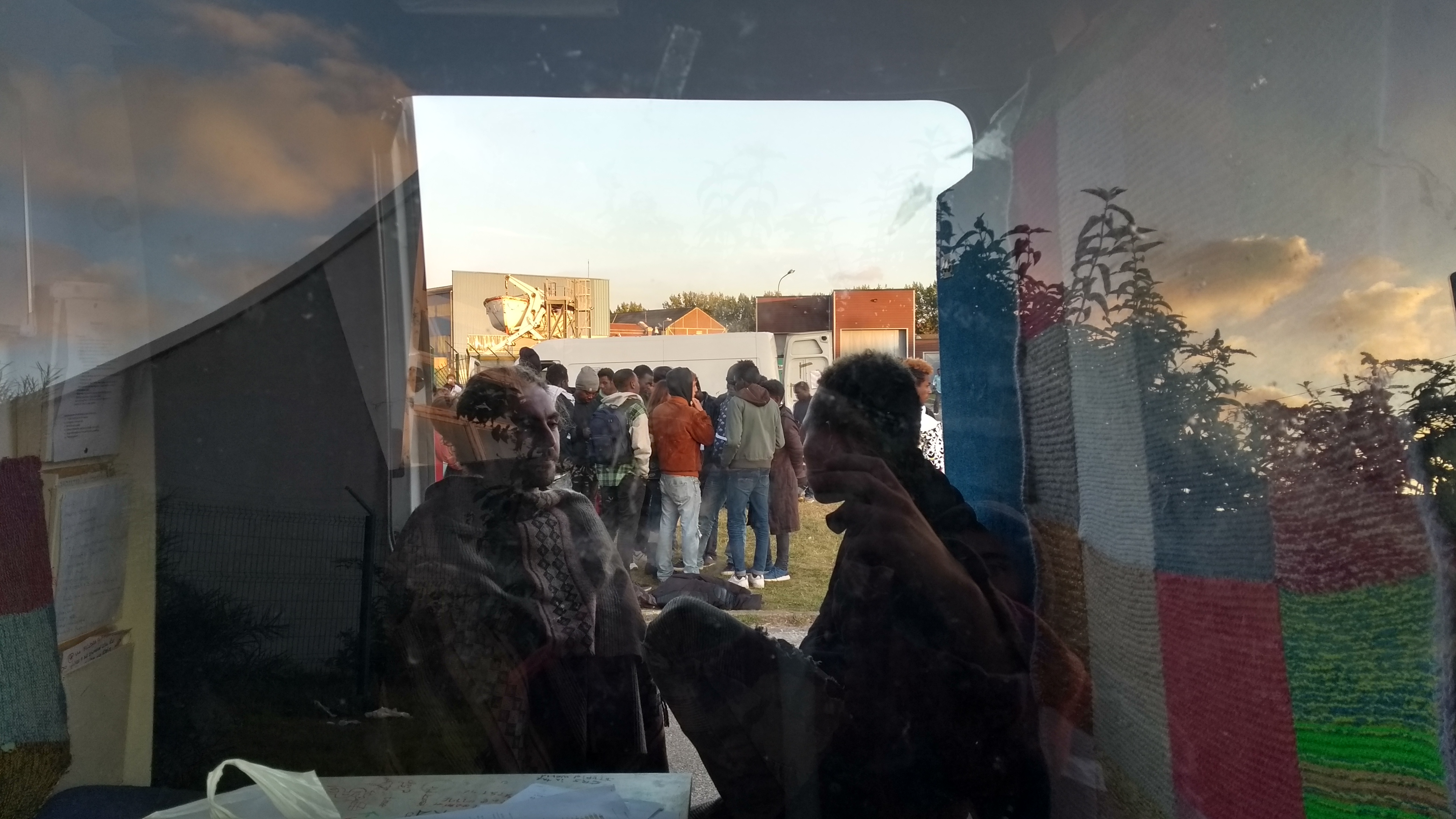 More than one week on from the start of these distributions, refugees across Calais have been systematically refusing to accept the government-funded food. In order to try and facilitate the long-awaited recognition by the French state of its responsibility to provide this basic right, RCK and Utopia 56 had temporarily halted their regular day-time distribution of hot food.

The Eritrean refugee community in Calais have been holding regular, mass community meetings over the past week to discuss the issue collectively. They have agreed, through consensus-based decision making, to issue demands to the local authorities before accepting any of their food.

What follows are the oral testimonies of members of this community articulating these demands, recorded and transcribed by a volunteer with the Refugee Info Bus. Whilst they only represent the views of one community, the words are echoed amongst the many other communities displaced and dispersed across the town. They are principled, poignant and impassioned, spoken with fire in their hearts, in lieu of food in their bellies.

“We don’t want to go to the government food distribution because it’s not peaceful for us. It’s not safe for us. They didn’t provide what we want, like the volunteers did before.

Starting from yesterday, I don’t want to take any food from the government at all. [It’s not safe] because the government provides food, but on the other hand the police take our clothes, our shelters, anything we have. If they want to prepare food, they have to prepare medical provisions. They have to provide shelter as well. They have to listen to what we want.” Anonymous — Eritrean male in his early 20s.

“Right now, the government is asking all the charity groups to stop feeding us… The government took charge of the feeding processes. If the government really cares about us, they should care about all things. We don’t only need food, because we don’t migrate from our mother countries only for food. We are in search of justice and peace, and here in Calais there is no peace and there is no justice.

If the government really cares about us, they need to arrest the criminals who shot Eritrean refugees in Calais. This is really, really disgusting. Right now there are four people sleeping in hospital and really they are in a very bad situation… So knowing this, why should we go to the same place [where the shooting happened] for food?*

We didn’t come here for food, we came here for justice and peace. If the government really cares about us, they should take care of us in all aspects. First, the most important thing is our safety. And then, after safety, all of the things that are being covered by charity groups, like blankets, tents, clothes, shoes, all basic necessities.

What’s really going on is police brutality. Police are really, really, really brutal to us. The charity groups try to give us tents, clothes, blankets and sleeping bags and in opposition to this, the police are still busy with trying to destroy this stuff… If the government really wants to take care of us, please take care of all the things that are being given to us by the charity groups.” Anonymous — Eritrean male in his early 20s

I just want to say some things because we are living in Calais. We are refugees… Every day, our life is bad, but we have some organisations to help us, with food, or clothes, everything. We survive with the things they give us.

Why don’t we want the food? The police are from the government. They are not by themselves. They come because of the government sending them here. Okay, now we have to wait. The government is here, they want to give us food, feed us food. And in another way, they send police, and police take our tents, our place. And sometimes they go behind us and [spray us with] gas. How can we want the government to feed us food? We have humanity. Everybody, we need it. Like the first human beings. We need our respect. We are not animals.

And now we won’t take food by the government. For now, it’s better to come from another organisation, by volunteers. Because, volunteers care about us more than the government. Yeah okay, yesterday, they start to give us food. They say they want to take care of us. Maybe some person feels sick. What will they do? And who can speak for us?

As for me, it’s so difficult. It’s impossible. We can never accept this. Never, never. Because, the government, I don’t know how it thinks. They send for us police and police give us spray in our eyes and if they see a person sleeping they come in, they take the tent. And the government says they’ll give us food…” Anonymous, 17 year old Eritrean

A central point for many members of this community was also the location of the distribution points that the state expected them to attend. Initially, the préfecture announced that there would be two distribution sites — one in the industrial zone and one close to the hospital. For the Eritrean community, neither was a viable option; both entailed individuals entering an area in which they felt unsafe, with the latter being located at the site of a shooting incident, in which organised criminals opened fire on members of their community, leaving 5 people in hospital.

On Thursday 8th March, the préfecture of Calais invited a representative of l’Auberge des Migrants, a local association, to give feedback from the communities we support about why the attendance at food distributions had been so low.

Whilst volunteers welcomed the opportunity to give a voice to our beneficiaries, the préfecture’s position shows precisely how out-of-touch the local authorities are with the current situation. Rather than communicating with refugee communities directly, they rely on associations, whom they have repeatedly maligned in the press, to deliver feedback on behalf of the people we support. In the meantime, they continue to direct riot police to destroy tents and use CS spray on sleeping teenagers in the middle of the night.

Since the beginning of La Vie Active’s contract to provide food to Calais’ refugee population, volunteers based at the l’Auberge des Migrants warehouse (including those from Help Refugees, Refugee Community Kitchen, Utopia 56, Refugee Info Bus, Refugee Women’s Centre, Refugee Youth Service and the School Bus Project), have been conducting an informal survey, in order to ascertain how representative the views expressed above are.

Volunteers recognise that the state should bear the burden of providing protection for displaced people on French soil, however we respect and support the sharply critical and deeply courageous stance that refugees have taken in issuing their demands to the authorities. 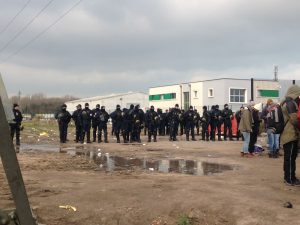 Police assembling at a distribution point.

We stand side-by-side with them and seek to echo and amplify their demands, calling upon the local and national governments to meet the needs of Calais’ refugee population with dignity, respect and without further delay.

The initial two points of distribution, in the industrial zone and near to the main hospital, necessitated members of the Eritrean community coming into contact with the same individuals responsible for the shooting on 1st February.

The préfecture has subsequently opened a third distribution point, closer to the woods in which much of the Eritrean community are forced to live. There has been no new information as to whether the police have made arrests in connection with this shooting.

This article was written by our partners Refugee Info Bus. They provide information, access to wifi and legal and asylum support to refugees in Northern France.

We desperately need support to keep our Calais operation running. We support 7 organisations working in Calais, and alongside L’Auberge des Migrants, fund the main warehouse from which aid is distributed to refugees in Northern France. Please donate today to support this work.

Your ticket for the: Refugees in Calais Boycott State Food Distribution